This year Ireland received a record number of nominations for the Oscars. Irish Times Data examines Ireland’s association with the world’s most famous statuette 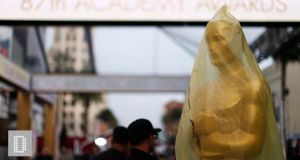 If you were under the impression that Ireland has had little association with the Oscars outside My Left Foot, Once and the quotes of Mr Wilde you’d be very much mistaken.

Ireland’s first and most lasting contribution to the Academy Awards is at the ceremony’s very heart: the Oscar statuette was designed by Dublin-born Cedric Gibbons, an art director with Metro-Goldwyn-Mayer, who also became Ireland’s first-ever Oscar winner at the second award ceremony held in 1930.

Although his first Oscar (for art direction on The Bridge of San Luis Rey) was the only award he received individually Gibbons was nominated for 38 Academy Awards and received 11 Oscars during his career.

However, George Bernard Shaw went one better. Having received a screenplay award for the 1938 film Pygmalion Shaw became the only person in history to have received both an Oscar and a Nobel Prize.

Six years later it was Irish acting legend Barry Fitzgerald’s turn to make history when he became the only actor to be nominated for both Best Actor and Best Supporting Actor for the same role in the same film for Going My Way.

The Irish took a break from Academy Award gathering after Gibbon’s collected his last in 1957. The next success came in 1982 when Kildare native Michèle Burke picked up her first of two Oscars for best make-up on Quest for Fire (her second was for Bram Stoker’s Dracula a decade later).

In 1985 Josie MacAvin won for best art direction for Out of Africa: she later donated her Oscar to the Irish Film Archive (it is now on permanent display at Irish Film Institute in Temple Bar).

Then came a golden age for Irish cinema: Jim Sheridan’s My Left Foot was nominated for five awards in 1989 with Daniel Day Lewis taking Best Actor (his first of three) and Brenda Fricker winning Best Actress in a Supporting Role.

The following year Richard Harris was nominated for Best Actor for The Field (his second nomination). In 1992 The Crying Game received six nominations with Neil Jordan taking an Oscar for Best Writing. A year later In The Name of the Father received seven nominations.

Peter O’Toole received an honorary award in 2002 for his “remarkable talents (which) have provided cinema history with some of its most memorable characters”.

2005 brought success for both Corinne Marrinan who won Best Documentary Short and Martin McDonagh who took the Best Short Film (Live Action) for Six Shooter. In 2011 Terry and Oorlagh George took an award in the same award for The Shore.

Of course no such retrospective would be complete without calling to mind the delicate opening notes of Falling Slowly from the film Once, for which Glen Hansard and Marketa Irglova won the Best Song award in 2007.

Ireland’s most recent successes have been in the animation categories:

This year, Ireland has a record nine nominations across six categories, an extraordinary haul given the size of the local film industry. Turning even one of those nominations into Oscars gold, given the quality of this year's international crop, would be an exceptional achievement.

Note: the years referenced in this article and accompanying timeline are for the year in which the award ceremony took place. The films indicated were released in the previous year.