An: hard to love, impossible to dislike | Cannes Review

Naomi Kawase’s latest hammers home the metaphors, but its conviction and intelligence also shine through 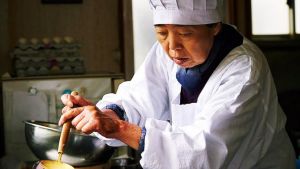 Bean there: Nagase Masatoshi in An

Last year, Naomi Kawase’s Still the Water, an elliptical tale of loss, played in the main competition here at Cannes. This year, the Japanese director opens Un Certain Regard – supposedly the mildly risqué section – with a considerably more conventional piece. All the middle-brow clichés are at work. Cooking is used as a metaphor for life. An older lady passes on the usual wisdom (take things slowly, appreciate youth while you have it). Blossoms show the passing of the seasons. It is a nice enough piece, but it will not be rattling the plates in anybody’s pantry.

Nagase Masatoshi plays Sentaro, the owner of a stand selling Doraki – pancakes sandwiched around sweet bean paste called “An” – that is just about managing to stay solvent. One day, an elderly lady named Tokue (Kiki Kirin) calls around looking for a job. Initially, Sentaro refuses, but, when he tries her homemade An, he is won over.

To this point, like a fool, he had been buying his in bulk. Tokue demonstrates the lengthy procedures involved in making the correct substance. One gets up before dawn, soaks the legumes for hours and generally treats them like tiny sacred objects. There are thunderingly obvious lessons to be learnt here. If we had any doubts about that, Sentaro dispels them when she says: “I listen to the story the beans tell.”

It’s all a bit creaky and it gets creakier still when a nice young girl turns up with a pet bird in a cage. But the actors inhabit the roles with unmistakable conviction and the intelligence about An is genuinely fascinating.

In its later stages, the picture nods towards documentary as it examines the plight of older Japanese people with leprosy (“They call it Hansen’s disease now,” somebody helpfully explains.) This feels just the tiniest bit forced, but the real-life survivors offer unanswerable testimony with their presence alone. It’s a hard film to love, but one that is impossible to dislike.