Amy Schumer: one inch away from hilariously dangerous

This week, Donald and Tara review romcoms Trainwreck and Mistress America. Plus, Donald explains how films today get the rare 18 certificate. 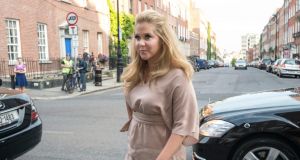 Actor Amy Schumer arriving at Belvedere College in Dublin for a Q&A with Judd Apatow, who directed her in the film Trainwreck. Photograph: Dave Meehan 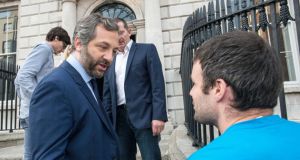 Film director Judd Apatow chats to a fan upon his arrival at Belvedere College for a Q&A in front of a live audience with actress Amy Schumer, who he directed in the forthcoming film Trainwreck. Photograph: Dave Meehan

“Who’s on?” “Amy Schumer. ” “Never heard of her.” Schumer, the comedian, actor and writer, might not be a household name among Dublin taxi drivers, but in the O’Reilly Theatre at Belvedere College in Dublin, a few hundred people last night had the hottest ticket in town.

There’s a very particular atmosphere in a room when someone at the peak of their prowess and still on the way up is about to step out on a stage, and you can feel it at this talk with Schumer and the filmmaker Judd Apatow, hosted by local heroine Panti.

The event is billed as Trainwrecks Collide, and Panti (whose own documentary Queen Of Ireland will be making its way out into the world shortly) rightly said neither guest needed an introduction, as a giant projection of their film poster for Trainwreck made up the backdrop.

Schumer found word-of-mouth fame with her comedy and outstanding writing and delivery on Inside Amy Schumer, a sketch show that eviscerates rape culture, sexism and lousy relationships.

Her perfectly pitched and brutally brilliant takedowns of misogyny and female peer pressure has made her an international feminist hero.

“I’m so excited that they’re even in the building!” one woman says as the auditorium fills up.

First up, Panti instructs Schumer to do the regular visiting Hollywood star thing and give a glowing Irish reference. Schumer obliges, “I’ve had a lot of sex in my life, and no bullshit 80 per cent of those were Irish people. Don’t applaud that. You know what that means.”

On the inevitable question about women in comedy, Schumer says that men still top 95 per cent of the bills in stand-up. “I think people want funny women,” she says. “Any chick that has an inkling of a desire to try it, should, because there is a shortage... I love comics that come from here.

“Maeve Higgins, I’m sorry, but we’re keeping her. And we’ll send her back for holidays.”

On a question from the audience about her writing process, she goes on a monologue: “I daydream a lot and walk around a lot because I’m lonely... I just buy pastries and walk around... I sit in bed and don’t move, and drink water. It’s a good escape because life is so awful... And then I reward myself with whiskey.”

Everything Schumer says is one inch away from hilariously dangerous, which is what makes her presence so thrilling. She’s also a crucial figure in an industry that needs more righteous women.

When an audience member asked a question about gender roles being flipped in the film, Schumer responds, “I didn’t flip the gender roles. So many girls say, ‘that’s me’.”