Whether as a straight-up piece of US flag-waving or a disturbing psychological study, director Clint Eastwood's latest is a complete muddle 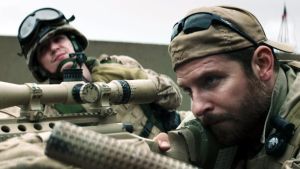 For a time, Steven Spielberg was interested in directing this screen adaptation of Chris Kyle’s American Sniper: The Autobiography of the Most Lethal Sniper in US Military History. We can see why he passed on it.

Chris Kyle was a classic good ol’ Texas boy. The son of a preacher and a Sunday school teacher, he learned how to shoot when he was eight, he played linebacker for the Permian Panthers (of Friday Night Lights fame), and worked as a professional rodeo rider before joining the Navy Seals at the age of 25. He served four tours of duty during the Iraq War. And how. With 160 confirmed kills during that conflict, he earned the nickname the Devil of Ramadi and was heralded as, yes, the most prolific sniper in US military history.

American Sniper, with Clint Eastwood at the helm and Bradley Cooper as Kyle, is only interesting because it’s so damned baffling.

Eastwood’s unshowy, laid-back direction, so often an asset, ensures that even the tensest dramatic moments – will Kyle shoot that kid with the explosive device? – are unexpectedly flat.

And those are still the most exciting bits. For much of the run time, we’re treated to the same old, same old military story: here are the scenes with his drill sergeant shouting at him; there’s the nagging wife who doesn’t understand (Sienna Miller, reprising a less sympathetic variation of her nagging wife in Foxcatcher).

We’re also treated to endless rhapsodising about “the greatest country of earth”.

To be fair, Cooper’s Kyle is a commendable, intense creation: an unblinking, psychopathic true believer who sees all Iraqis as “savages”.

It is possible to make a superior thriller rooted in such a story: Peter Berg’s Lone Survivor came across as a slick, action-packed entertainment, regardless of what one’s ideological leanings were. But American Sniper is not that film.

In theory, we suspect, it is a complex double-coded operation, designed to play as straight-up heroism for flag-waving US patriots and as a deeply disturbing psychological study for everybody else.

In practice, it’s a muddle.

For all the “hoo-ha” for his brothers-in-arms, Kyle’s fellow Seals are but a distant, undifferentiated haze. Despite occasionally overheard random facts – “son of a preacher” or “about to propose” – they possess no discernible personality traits or points of interest other than getting killed. Scenes of camaraderie – the lifeblood of any military-themed picture – are minimal.

Eastwood’s tight focus on Cooper and Tom Stern’s claustrophobic cinematography force the viewer to sit on his side of the crosshairs. Ultimately, however, those decisions smother the film.

It may be admirable for Eastwood to have de-dramatised the material. But that doesn’t make this hugely disappointing film any easier to sit through.