A very Gothic education: Mia Wasikowska on her scariest role 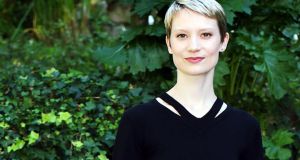 Guillermo’s ghosts announce themselves as they come into the world and seem scary. But he’s very adamant that the ghosts in his films are not what you should be afraid of. It’s people that do the real harm. The ghosts just provide the warnings.

When Meryl Streep won the best actress gong for The Iron Lady at the 2011 Golden Globe Awards, she used her moment on the podium to insist that everyone should watch Cary Fukunaga’s version of Jane Eyre starring Mia Wasikowska in the title role.

Five years have passed since I met Wasikowska for that particular Brontë adaptation, and while a lot has happened to the artist between times – she has been directed by Park Chan-wook, Jim Jarmusch, Lisa Cholodenko, Gus van Sant, John Hillcoat and David Cronenberg – her pixie-sized frame (and matching haircut) mean she has changed very little in aspect, or in manners.

She speaks softly in her native Canberra accent: so softly that many critics leapt out of their seats when her Madame Bovary loudly reprimands her husband in Sophie Barthes’ incoming Flaubert adaptation: “But you’re not a country doctor!”

Another corset. Another proto-feminist interpretation.

“I know,” she says. “I didn’t set out thinking I’ll do all these proto-feminist literary roles. It’s only after I note the similarities. They are the roles I’m drawn to. They’re so much more fun to play. And a lot of people say, ‘you’ve done so many period films’, but they seem so different to me. Jane Eyre was so realistic. Crimson Peak is much more operatic.”

Bump in the night

Crimson Peak is the new film from Guillermo del Toro, director of Pan’s Labyrinth, Blade II and the Hellboy films. Set at the end of the 19th century, the Gothic horror film follows bookish American heiress Edith (Wasikowska) as she journeys with her new husband (Tom Hiddleston) and creepy sister-in-law (Jessica Chastain) to a crumbling ancestral pile in northern England. Soon enough, things go bump in the night for the paranormally sensitive Edith.

“With this film I was very concerned that Edith wasn’t too passive,” says Wasikowska. “Especially as she’s the lead character and the eyes of the audience. I wanted her to begin with a bit more spirit and self-awareness. It wasn’t just like a surprise when she doesn’t allow herself to get chipped away by the things around her.”

Despite the A-list cast, Crimson Peak’s real star is its elaborate set: a three-and-a-half-storey maze of Gothic corridors. Even Wasikowska, who first came to prominence as the star of Tim Burton’s hardly unspectacular Alice in Wonderland, was knocked out by the elaborate designs and the rouge-eriffic Mario Bava-friendly palette.

“It was amazing,” she says. “I had no idea of the extent that they were going to go to when creating that world. I definitely wasn’t aware that they were building the sets. I assumed most would be green screen. It was incredible to have that sense of space and walk down the hall and into the library and up the staircase. And you would just continually realise things. In the kitchen the walls would start seeping red clay. The word fear was etched into the wallpaper in the corridor. The black dying moths spelled out words. The detail was extraordinary.”

There are a lot of dead creatures in her films of late.

“I know. And incest. There’s no correlation between the two, I promise.”

The actor, who boned up on Jan Švankmajer’s 1988 stop-motion film Alice ahead of her youthful turn in the Burton film, admits Crimson Peak marked the beginning of a very gothic education.

“I love reading, but I didn’t have a wealth of knowledge when it came to that genre. Maybe it’s just not prominent in Australian culture. I had read the Brontë novels. But until I started work on Crimson Peak I didn’t even know that Frankenstein was written by a woman. I feel like I got a great education through Guillermo, because I finally read The Turn of the Screw and Frankenstein, and I learned a lot about Mary Shelley and that entire early Bohemian set. I just wouldn’t have thought to read those books. It was really cool having Guillermo suggest these things.”

“I do like ghost stories,” she says. “And I believe in emotional ghosts. I’m interested in how we make them physical in culture. Everybody portrays them differently. Guillermo’s ghosts announce themselves as they come into the world and seem scary. But he’s very adamant that the ghosts in his films are not what you should be afraid of. It’s people that do the real harm. The ghosts just provide the warnings. Whereas Cronenberg’s ghosts are very real and very subtle.”

I did love her gloved psychopath in Cronenberg’s Maps to the Stars. She may be the nicest movie psychopath ever.

“I think so. She’s the nicest character in the movie, and the most dangerous. I loved that in the celebrity-obsessed culture of the movie she’s just obsessed with family. All her psychopathy are really just attempts to get back to her family. That’s not to say she’s not crazy but there’s something really sweet and sad about her. I was surprised that the film was so dark when I watched it. I had not noticed. It seemed funny while we were doing it. And I was getting lots of offers for roles where I would cry a lot. So I was just delighted to play a perky psychopath.”

She does seem to love a certain kind of airless, non-outdoorsy universe: del Toro’s Crimson Peak, Jarmusch’s Only Lovers Left Alive, Richard Ayoade’s The Double. And yet she trekked across 2,700km of Australian deserts in John Curran’s Tracks (2013).

The wind and the sun

“Oh my God,” she smiles. “I remember reading it and thinking, this will be so hard. But when you get there you just respond because it’s so tough and hot and glaring anyway. That’s not to say it wasn’t hard, but so much of the work was reaction. You don’t realise how just being outside impacts your performance. If you’re on a green screen, there’s nothing influencing at all. So it’s strange having the wind and the sun to respond to. If it’s windy you raise your voice. If it’s sunny you’re squinting. These are such small things but they have a huge impact on your performance.”

Mia Wasikowska has been on camera and around film for a long time. The middle child of Polish-born photographer Marzena Wasikowska, and photographer and collagist John Reid, Mia and her family moved to Szczecin for a year when she was eight, after her mother received a grant to produce a work based on her experiences of emigration.

“It was the first time we had left the country,” recalls the actor. “It was a whole new culture but it was something that already felt familiar to us through my mum and grandma. We were always part of my mum’s work. But we were never posed. Her work is very documentary-based. So we weren’t really aware of the camera.”

At nine, Wasikowska began training for a life in ballet, working on the barre for 35 hours a week in addition to regular schoolwork. A heel injury at 14 changed everything. Happily, by then her mother had screened films by Gillian Armstrong, Jane Campion and Krzysztof Kieslowski. Plan B beckoned.

“I thought ballet would be my life and then when I got my injury I started to realise that maybe I wasn’t right for that world. I loved the full-body experience. I loved that it was non-verbal. But I had my heart broken by dance a little bit. It’s a harsh industry. And my body wasn’t right because ballet requires a very specific look. So you become obsessive about your own body. Which is incredibly unhealthy. Acting felt like a close cousin. But without the neuroses. So I tried it.”

She laughs. Ever so quietly. “And for some reason I keep getting work.”

Adding to a long list of big literary hitters – see Bovary, Eyre or her Dostoyevskian heroine in The Double – she’ll soon be returning to the rabbit-hole in the long-awaited Alice Through the Looking Glass.

“It’s so strange,” she says. “All these years later. I thought that if we were doing a sequel it would have happened a year or two after the first film. So this was a complete surprise. But the director James (Bobin of The Muppets fame) added a really sweet humour and all the original cast are back. So I think it’s going to be a very sweet film.”

Crimson Peak is out next week