A Shameless approach to The Stone Roses 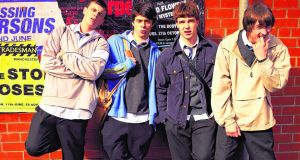 No one could ever accuse Elliott Tittensor of putting on airs and graces. His none-more-Mancunian vowels are jollied along by a pleasingly cheery demeanour. His long-term partner Kaya Scodelario is “my beautiful girlfriend”, his 11-year-old Selfish Giant co-star Conner Chapman is “ridiculously brilliant” and my accent is, apparently, “just deadly”.

Tittensor is plenty down-to-earth. While other hotly tipped actors are filling their downtime with Bikram Pilates and hip charitable causes, Tittensor enjoys “pedalling his bike a bit” and listening to Gregory Isaacs in his bedroom.

His performances are as natural and easy as he is, an extension of a creative process he describes as “mostly messing about”.

A screen veteran at 23, he’s had time to adjust to the work and to the celebrity: “I’ve been doing all this stuff so long,” he laughs. “I don’t even notice it.”

“There had been an audition at our school in Heywood for a BBC drama,” recalls Tittensor. “And I’m not even sure what happened there was so much messing about. I think Luke got called back and I didn’t. So when Shameless came up – it was an open casting call – we went for it. But we didn’t really have a clue what we were doing at the time. We didn’t know anything about acting when we got the part in Shameless. We didn’t even know to keep ourselves free for series two.”

Shameless would run for 10 seasons: Tittensor would feature in nine of them and would return, after a hiatus, for the show’s finale earlier this year. It must have been wrenching to walk away from a project he started as a teenager, surely?

“It was strange because I left about two years ago but I wasn’t sad at all,” he admits. “It was when I came back for the final episode – which I thought was quite enjoyable – it was when it was actually coming to an end that was hard. Being back with the cast who were like my family for 10 years was so sad. I didn’t cry because at the same time it was nice. Ten years is a really nice stretch of time to cover together.”

Ten years is also plenty of time for viewers to develop a relationship with their own personal Carl. Tittensor, accordingly, has spent much of the last 10 years batting away guys who wanted to fight and girls who wanted the opposite.

“I remember when the show started and it was the kind of show that the neighbours all came around to see,” says Tittensor of the resolutely red-brick drama. “A lot of people noticed it and you. And sometimes you are Carl. You are that character. So maybe you are just like that character. They automatically has an idea of you – they come up and say ‘alright’ – like they know you.”

Did all those TV sex scenes at such a tender age turn him into an extrovert, I wonder.

“It’s funny because if I’d known what I know now I probably would have said ‘no’ more. I mean I got my top off a ridiculous amount. I can’t complain. It was an amazing job and an amazing experience and a huge part of my life. But if I had to go back, I might have kept my shirt on more often.”

Tittensor is a natural star for Spike Island: in common with his character, he used to get called ‘Tits’ at football practice: “As soon as I saw that he was called Tits, I knew it was meant to be,” he laughs.

This new British road movie is based around The Stone Roses’ much-lauded 1990 homecoming gig on a chemical dump. Written by Chris Coghill (who appeared in Shameless and 24-Hour Party People), Spike Island’s exuberant coming-of-age drama is happy to print the legend. There are no ecstasy casualties here, only ecstasy, as a gang of working-class teens get caught up in the music and an event they describe as “the most important gig in the world”.

“As soon as my neighbour heard I was doing this film, he brought me round to the house with some of his mates and showed me the dance,” says Tittensor. “He was at that gig. It’s a real touchstone for people that age.”

Tittensor, a huge music fan who has appeared in videos for Plan B and Coldplay, enjoyed the romance of living in a Winnebago with his co-stars and the omnipresent Roses soundtrack, though he suspects that contemporary music is simply too fragmented to allow for a second Second Coming.

“Music is so widely accessible. Everybody has their own scene. You can chose whatever music from whatever place. I like reggae and blues music. So the idea of everybody being into one band is kind of amazing. That’s a wicked idea. And I do think, like the film, that music can make everything better.”