A documentary on the pathology of power in the Catholic Church 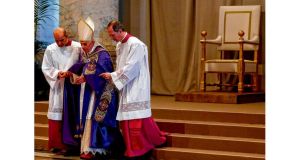 Alex Gibney's latest film, on sexual abuse in the Catholic Church, alleges a direct link between the outgoing pope and the abuse of children in the US

It seems redundant to note that Alex Gibney’s documentary on sexual abuse in the Catholic Church has emerged at an appropriate time. After all, given the endless torrent of grim revelations, Mea Maxima Culpa: Silence in the House of God would, if released at any random point in the last two decades, have chimed with contemporaneous headlines.

The recent resignation of Pope Benedict XVI has, however, provided the American documentarist with an interesting afterword. The picture focuses closely on the abuse of deaf children in a Wisconsin school from the mid-1960s onwards, who later courageously blew the whistle. The film also implicates the former Joseph Ratzinger in a complex cover-up. Gibney has subsequently suggested that Benedict’s unexpected retirement was linked to the child-abuse scandal.

Visiting Dublin for the Jameson Dublin International Film Festival, Gibney, a taut, bald man with a serious demeanour, backtracks only slightly. “Maybe it would have been better to say that I hoped his resignation was connected to the child-abuse case,” he says. “I hope that for myself and hope that for him. I think it would be sad if it was just that he was tired. That’s what the church was saying.”

The film alleges that Ratzinger, then prefect of the Congregation for the Doctrine of the Faith, halted the canonical trial of a priest named Lawrence Murphy. A teacher at St John School for the Deaf in Milwaukee, Fr Murphy is alleged to have molested up to 200 boys.

“That is the connection to the top,” Gibney says. “There are documents connecting the Milwaukee case to Joseph Ratzinger, who as head of the Congregation for the Doctrine of the Faith, oversaw this canonical trial of Lawrence Murphy. He intervenes and he stops the canonical trial. That taught us a lot – in a documented way.”

Gibney, an Oscar-winner for Taxi to the Dark Side, is one of America’s most prolific and highly garlanded documentary film-makers. His other movies include studies of such diverse subjects as the Enron scandal, writer Hunter S Thompson, lobbyist Jack Abramoff and – coming our way soon – the enigma that is Julian Assange.

If the current film has a problem it is that it tries to pack too much in. The Milwaukee case leads on to a study of clerical sexual abuse in every corner of the globe. At one point, he touches down in Ireland to ponder the ghastly case of Fr Tony Walsh, the former Elvis impersonator sentenced in December 2010 for abusing hundreds of children.

Such is the mire the Irish church finds itself in that Gibney must have had to choose between a vast array of possible subjects.

“To be honest, at the beginning, we weren’t sure there was going to be an Irish component,” he says. “But what interested me was how quickly the political landscape had changed in Ireland. Civil society was taking charge on a way that was very profound. We came here and decided quite quickly that Tony Walsh was the one. It had a lot of connection to the story in Wisconsin. They were both charismatic priests who used that charisma to get close to their victims. They didn’t lurk in the shadows. It had happened some time ago. But the revelations in the Murphy Report made it relevant again. There were resonances with the past and the present.”

The son of Frank Gibney, a prominent journalist, Alex was raised in a Catholic background and has some understanding of the effect the scandals have had on believers. He admits, however, that the situation is particularly grim in Ireland.

“I was surprised at quite how angry the people were towards the church,” he says. “I kept hearing the word ‘them’ – meaning the hierarchy. A lot of people have great affection for their parish priest. But the idea that skulking in the background were these bureaucrats who were busy hiding predators was something very palpable.”

One might reasonably assume that – so much having been written on this subject – the hierarchy and their apologists would have grown immune to the revelations. But Gibney has had to counter a series of aggressive counter-blasts from aggrieved believers. Bill Donohue, president of the Catholic League for Religious and Civil Rights, was on his case immediately. Did Gibney see that coming?

“I was surprised,” he says. “Look, honestly, there is a very thuggish wing to the American Catholic Church represented by the Catholic League and this guy Bill Donohue. He came after me hard. They also came after Andrew Sullivan, who wrote a very powerful essay on the film and the church. I got that, too. Some assemblyman in Queens has accused me of anti-Catholic bigotry.”

His even tone gains just a hint of bubbling frustration. “It’s bollocks. It’s bullshit. It’s always the defence of the powerful to pretend to be a victim. You see that over and over again. It is part of the pathology of power. We were very careful to separate faith from the crime. This is a crime.”

To force home his point, Gibney refers to the admirable Fr Tom Doyle. A Dominican, Doyle has struggled relentlessly for the victims of clerical sexual abuse. Indeed, in previous interviews, the cleric has described himself as “the most reviled priest in the US”.

Mea Maxima Culpa: Silence in the House of God is on limited release from Friday

Film Festival reviews: From the sea inside to Italian jobs

Squint the right way and the festival’s most astonishing film looks sort of like other twisty time-travelling romances (Eternal Sunshine of the Spotless Mind, Je T’aime, Je T’aime) and kind of like classic Eastern Bloc sci-fi (Solaris, Icarus XB 1). In this spirit, writer-director Kristina Buozyte’s daring third feature has been variously compared to the work of Stanley Kubrick, Andrei Tarkovsky and Gasper Noe, yet still stands quite apart from anything we’ve seen before.

Leading man Jampolskis maintains a clinical precision throughout Lukas’s subsequent psychological dissolution. He needs to: everything about Vanishing Waves is ravishing and overwhelming; every interior is a freaky character in its own right; every detail is pitch perfect and strangely disconcerting.

Just when we had become used to viewing Richard Gere as a kind of cinematic comfort blanket, he delivers his best performance in decades (possibly ever). Directed by Nicholas Jarecki, Arbitrage looks, on the surface, very much like another of the tasteful, high-end thrillers that have wasted so much of Gere’s time since the Reagan years. A crooked, married hedge-fund manager – currently planning to sell his company – crashes his car and flees the scene, leaving his girlfriend dead. He calls upon the services of an ex-con to help mop up the damage, but detective Tim Roth is on the case.

Jarecki has chosen his title well. The protagonist’s slippery approach to finance is mirrored by his equally cynical attitude to personal morality. For all its superficial familiarity, the story finds endless fresh turns to surprise the audience as we drift towards an icy conclusion. The supporting cast – Susan Sarandon and Brit Marling are also on board – excel, but Gere bosses the film with a turn that takes in both brutal arrogance and believable vulnerability. - Donald Clarke

If Argo has left you jonesing for more politically themed period thrillers, might we direct you toward “the Polish Argo” (80 Million, screening as part of tomorrow’s JDIFF programme) or this slick Poliziotteschi based on the historical Piazza Fontana bombing?

In 1969, an explosion at the Banca Nazionale dell’Agricoltura in Milan resulted in 17 deaths. Police commissioner Luigi Calabresi (Mastrandrea) responds with a crackdown on anarchists and communists believing these are the most likely culprits. But when a suspect (Favino) dies suspiciously in custody, Calabresi faces a myriad of questions and Machiavellian machinations. Have the anarchists been framed? Was the CIA involved? Where do the neo-fascists and international arms dealers come in? Can the explosives really have come from Nato?

Unlike Ben Affleck’s film, Marco Tullio Giordana’s engaging procedural doesn’t shy away from political nuance and epic dimensions. The delivery, despite the conspiracies and convolutions, remains taut and stylish. The cars and suits would make Don Draper weep with envy. Well, maybe not what the communists are wearing. - Tara Brady