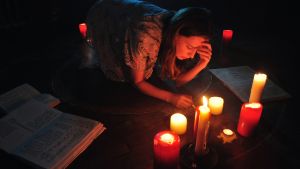 Joseph Solomon (Steve Oram), is an experienced occultist with all the charm of a wounded loan shark. Having received a gobsmacking amount of money from grieving Sophia (Catherine Walker), the bickering pair retreat to an isolated house in rural Wales with to perform the Abramelin.

“The Abramelin,” explains Solomon, unhelpfully.  “It’s essentially a journey. That’s a poor metaphor, that is, but it will do for now.”

They may be some time. At Solomon’s urging they have purchased six-to-eight months worth of meat. During the Abramelin period they may not leave the house. Sophia hopes that the elaborate ritual will allow her to once again speak with her guardian angel, and, ultimately, with her dead son. But might Solomon be some kind of crazy, meat-loving con artist?

Why on earth would the Abramelin require Sophia to shave his arms?

After an unspecified period of weird watery ceremonies, sleep deprivation, blood-drinking and at least one unpleasant sexual encounter, she begins to question his demanding rituals. He, in turn, points to “signs”. When an unwitting bird flies into the window, that’s a sign. Or might it just be an unwitting bird?

This novel, nifty Irish horror – the first and best of a small murder of indigenous genre pictures coming our way in 2017 – plays intriguing, contrary games with expectation. One could easily see Oram’s lowlife necromancer spending quality time with the shouty undesirables he essayed (and created) in Sightseers (2012) and Aaaaaaaah! (2015), but he’s not at all what one expects to find in the movie industry’s supernatural community. His performance works well against Catherine Walker, whose palpable anguish adds an entirely different dimension to writer-director Liam Gavin’s impressive debut feature.