Jackie Collins, the bonkbuster author with a strong moral code

The Thunder Girls author Melanie Blake on her hero, who made her a reader and a writer 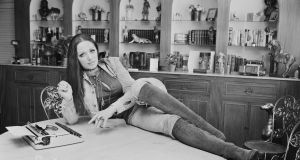 To look at me now, not many people would assume that my early life was one of benefits, food bank donations, charity shop clothes and queuing up for free school dinners. It’s fair to say I’ve come a long way from my humble upbringing. With a violent father and an unhappy mother I didn’t have a role model to look up too, that was until the age of nine on a trip to the local library to enjoy the warmth (our house was always freezing.)

It was there that I discovered the woman who would inspire me to believe that I could change my destiny because, to quote the lady herself, “girls can do anything.” That woman was the late, great Jackie Collins and from the moment I spotted the glossy book cover of her novel, Rock Star, a spark was ignited in me that was so bright it would eventually lead to me throwing my old life on a bonfire.

As I sat in the corner of the children’s section, where others were reading the much more age appropriate Worst Witch titles, I flipped the book over and was instantly mesmerised by the photo of Jackie on the back. She looked strong, stylish and, most importantly, she looked happy.

I must have spent all day in that corner devouring every word on the pages as I went on a ride through the musical worlds of her fictional superstars. The men were sexy and dangerous, the women strong, sassy and determined and it truly felt like you were being taken behind that velvet rope that keeps us mere mortals away from the inner sanctum of our idols.

Of course, the beauty of Rock Star is not the glamour, of which there is plenty, but the revelation that all that glisters isn’t necessarily golden. This is a theme that Collins carried throughout her entire career. Every title pulled you in. On first glance it would seem like the subjects, be they mafia bosses or rich kids, had it all, but as you’d read on late into the night the focus was nearly always on the unravelling of whatever her characters’ dreams were – showing that whilst it was escapism for the reader, should we ever get the chance to live like the heroes and heroines inside her pages then there would be a heavy price to pay.

Like those famous words from the iconic ’80s film, “Fame costs, and right here is where you start paying”, in many ways Jackie’s novels were a true example of the cost.

Even when her most famous leading lady, Fontaine Khaled (played by her sister in both movies) described as a jet-setting beauty (“her face is her fortune and men are her weakness”) seems to have it all – a rich husband, her own nightclub and more men on the side than any one woman with a high sex drive can handle – ultimately she pays a heavy price for her adultery by losing her fortune and also being turned away by the toyboy she risked it for.

Jackie Collins might have been known for the bonkbuster but actually there’s often a strong moral code in her novels.

Take Hollywood Wives, for example. Decades before the world was binge watching The Real Housewives franchises, Collins had already spotted that beneath the inside view from the A-list marital homes often splashed across the pages of celebrity magazines or featured on documentaries about how the rich and famous live, there was often a much deeper, darker, rotten root hidden under the perfect porcelain veneer.

I loved Hollywood Wives and I’ve read it several times. As entertaining as it is, it’s also sad because at its heart the story revolves around women who really just want to be loved and men whose egos are so fragile that only hopping on a woman a fraction of their age can prop them up. Talking of propping, Collins has great fun describing the pre-Viagra age of an older man trying to keep up with his young conquest – and even now those scenes still make me laugh.

There are fewer laughs in Poor Little Bitch Girl, which Jackie’s estate have just re-released as part of her new eBook collection. Once again Collins returns to what appears to be her favourite character, Lucky St Angelo, who this time finds herself in more hot water but with fewer happy endings than many of the cheating men in the pages book themselves in at a massage parlour for.

I often wonder if Lucky, who grew up in a crime family and had four marriages under her belt, was Jackie’s bad girl alter ego. Collins seemed so down to earth, such fun, so likeable, so trustworthy, it was in part what helped her reach over 500 million book sales. She was like that naughty, indiscreet aunt who you couldn’t wait to see at a family party, knowing that after a Babycham or two her tongue would start wagging and she’d share a secret or three with you.

Lucky was the complete opposite: wild, ruthless and filled with rage. Lucky takes the lead in another of Collins’s finest works, Lady Boss, this time finding herself in charge of a Hollywood studio, where, surprise surprise, everyone in town is out to get her, but as ever our plucky heroine takes them all on and wins – but not before she takes us on a rollercoaster adventure on Hollywood’s darker side of financial scheming, big-time betrayal and bizarre sex.

People often dismissed Collins’s work as chick-lit fluff, but in truth, that is simply snobbery. When she was at her peak, readers wanted escapism and that’s what she gave them, and now years later in the middle of one of the worst pandemics we’ve ever seen it’s no surprise that people are once again losing themselves in her world for a few days – it’s certainly a lot more fun than the one we are living in.

I’ll never forget that kindly librarian who let me take Rock Star home with me that day, both of us knowing that after she’d seen me reading it for over three hours in the corner by the Spot the Dog poster that it was most definitely not “for my mum”.

It was life-changing because thanks to Jackie’s books I saw a world where women didn’t just accept the poor cards they’d been dealt. They worked hard to build new lives and no matter how hard the fight they got what they wanted and won.

Skip forward 30 years and my novel The Thunder Girls became a No1 bestseller with many critics saying I was “Jackie Collins for a new generation”. It’s a lovely compliment but not one I accept. There will only ever be one Jackie Collins, but I like to think she’s looking down, sipping champagne on a cloud wearing leopard print and watching me wave the flag for her and saying “go for it, girl”.

Melanie Blake’s The Thunder Girls is out now in eBook at £3.99. You can tweet Melanie Blake @melanieblakeuk