What caused the fall of Irish Catholicism?

A new book on the issue, Tracing the Cultural Legacy of Irish Catholicism, is highly readable 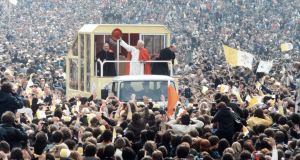 Book Title:
Tracing the Cultural Legacy of Irish Catholicism: From Galway to Cloyne and beyond

Throughout most of the 20th century in Ireland, the Catholic Church was involved in a symbiotic structural entanglement with the Irish Free State as this reality unfolded socially and politically. As the song says, both went together like a horse and carriage. This seemed normal and almost providential to the majority of Ireland’s citizens for the first half-century of our existence. Then, very suddenly, in a period of 20 years, more or less, the horse collapsed or the carriage crumbled, whichever way you choose to look at it: the Catholic Church melted away. How did this happen? How could this have happened? This is the question posed by this collection of essays.

I’m not sure whether it is possible, with a hindsight of less than 20 years, to give a comprehensive overview of the decline and fall of the Catholic Church in Ireland. If it is possible, this work is as good an attempt as you will find, and it will certainly provide later generations with the contemporary wherewithal to make a more definitive long-distance judgment. For their specific purposes here, the contributors to this volume create a prism that provides clarity and focus. They situate their examination between the year 1979 as the first bookend and the beginning of the new millennium as the second. Although the editors wish to avoid the trap of taking a pro- or anti-Catholicism stance, the one thing that all contributors are agreed upon is that the Catholic Church in Ireland is in serious decline. Such unanimity in no way identifies any clear understanding of what is meant by that statement. As one essayist points out: “Culture is complex and develops in ways that make it difficult to dismantle.”

Thirteen writers from a multidisciplinary panel provide scholarly, although highly readable, accounts of the history, context and causality of the dismantling of “the once-dominant force that was Irish Catholicism”. Fourteen essays survey, from multiple standpoints, the relevant past, the uncomfortable present and the possible future for Irish Catholicism. Nor is this a propagandist exercise. The contributors are dispassionate, whatever might happen to be their private affiliation. The book is elegantly presented, although the interesting essay on photography, suggesting that “the propagation of imagery in any society is directly related to the dissemination of authority”, would have benefited from a more sophisticated kind of printing to illustrate the important points being made about the influence of that medium. The photographs reproduced are somewhat faded and difficult to decipher.

These studies emphasise, at the nether end of their chosen chunk of history, that although publication of four damning reports (Ferns in 2005; Ryan in 2009; Murphy in 2009; and Cloyne in 2011) certainly put nails in the coffin of the dominant Catholic culture in Ireland, “the die had already been cast in terms of people’s move away from organized religion”. It wasn’t simply the scandals and the revelations of horrific behaviour on the part of certain members of church officialdom that caused disaffection among the church-going population; these were stimuli that added impetus to an already growing momentum.

These pages also belie the oft-cited view that the visit of Pope John Paul II to Ireland in 1979, which is the point of departure for their overview, represented a high-point for Irish Catholicism as an all-encompassing socio-political amalgam, symbiotically connected with the State. Several essays suggest that far from being sent on a triumphalist visit to our shores, the super-star pope was the final hope in something of a last-ditch stand against an inexorable secularist tide.

But even these two refinements of perspective at either end of their chosen corridor may turn out to be somewhat short-sighted. Was not the whole world being torn apart by a much older and wider fissure on the Earth’s surface? Is it not also a possibility that a new era had dawned the world over. It was not only Ireland that had suddenly recognised that the lives of its whole population, especially women, “had been framed by a celibate male-dominated institution”. Most of the so-called first-world countries had become aware that a (perhaps) 4,000-year-old patriarchal paradigm had been dethroned and that a tidal wave of repressed archetypal femininity (in both men and women) was seeping through the concrete? One of the essays uses a theoretical framework of Charles Taylor to show how Ireland “represents an intriguingly compressed version” of a world-wide “dethroning” of Catholicism by “modern secularism”.

“In a post-Catholic Ireland, characterised by questioning, doubt and unbelief, where the Church can no longer impose its version of the truth,” the writers here suggest that “the more cryptic and sporadic insights of poetry” might have a better chance of capturing the imagination of a public who are certainly still thirsting for “glimpses of the transcendent”. In other words, in times of uncertainty, art may be able to sketch a way forward. However, the contributors also note a downward trajectory in the belief patterns of Irish artists themselves.

An older generation of more rural artists such as Seamus Heaney and John McGahern are shown to be more tolerant and benign towards the Catholic faith they had rejected, even to the point of being buried in Catholic graveyards with traditional funeral rites and ceremonial. A later generation of more urban novelists, such as Anne Enright and Roddy Doyle, reject the whole paraphernalia, lock stock and barrel. “It’s difficult in a country like Ireland,” says Doyle, “because you do have to put your face out and tell it to go away – ‘Fuck off’. You have to be quite blunt to allow yourself your own agnostic space.”

Whatever about the possibility of a way forward, contemporary society rejects the Catholic Church’s presumption not just to regulate private lives but “to dictate what it means to be Irish”. One of the editors’ take on the same-sex marriage referendum in May 2015 is salutary. Marriage as “a core ideological signifier of ideological hegemony” makes this vote into a transformation of Irish society from a conglomeration of semi-independent organic homesteads into a more postmodern and pluralist network of social relationships. A whole new sociology might have to be invented.

In general the overall tenor of this publication is captured in these words of Louise Fuller: “The mood is grim, and, undoubtedly, the Church is fighting a rear-guard battle in Ireland, but in the matter of religious allegiance, absolute conclusions can never be drawn. The religious instinct is deeply ingrained in human nature. Sociologists have pointed to the resilience of the Catholic cultural legacy in Ireland, and there are many signs of this.” To get an overview of the whole predicament, this timely study is to be recommended.