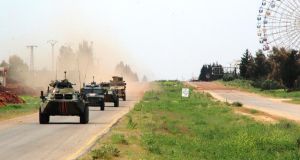 Turkish and Russian armoured vehicles on joint patrol of the M4 Motorway on the western outskirts of the city of Saraqib in the Idlib de-escalation zone. Photograph: Russian Defence Ministry\TASS via Getty

Book Title:
War in the Age of Trump, The Defeat of Isis, the Fall of the Kurds, the Conflict with Iran

Patrick Cockburn has been a familiar figure on Middle East battlefields for decades, racing around frontlines despite a weak leg, the legacy of childhood polio when he was growing up in Youghal, Co Cork.

War in the Age of Trump begins with the US assassination of Gen Qasem Soleimani, Iran’s eminence grise in Iraq, at the beginning of the year.

Adel Abdel Mahdi, who was prime minister at the time, told Cockburn he was scheduled to meet Soleimani on the morning he was killed. “He came to deliver a message from Iran in response to the message we had delivered from the Saudis to Iran,” Mahdi said.

Trump’s decision to kill Soleimani was widely condemned as a blunder, but it takes on a whole new significance if, as Cockburn suggests, the Iranian commander was endeavouring to defuse tensions between Saudi Arabia and Iran. This is the sort of exclusive information we have come to expect from a veteran Middle East correspondent with 10 books and a half dozen awards to his name.

Over the past two decades, Washington has wrought regime change in Afghanistan and Iraq. In both countries, the previous regimes were viscerally anti-Iranian. As Cockburn points out, Shia Muslims allied with Iran are winning in Iraq, Syria and Lebanon. The mullahs must be saying thank you America.

The US and Iran, arch-enemies of the Middle East, “shake their fists at each other over the table, but shake hands under it”, says an Iraqi adage quoted by Cockburn. Washington and Tehran have agreed on the appointments of all Iraqi presidents and prime ministers since the US overthrew Saddam Hussein in 2003.

Though Cockburn clearly dislikes Trump, he credits his administration with successfully co-ordinating “a multitude of fractious parties in Iraq and Syria” in the offensive against Isis strongholds in Mosul and Raqqa. Cockburn finds Trump’s December 2018 decision to pull US troops out of northern Syria perfectly rational. “There was to be an open-ended US commitment with no attainable goals in an isolated and dangerous part of the world where it was already playing a losing game.”

Cockburn is part of a cohort of western intellectuals and public figures who have sympathised with the plight of stateless Kurds. Because Kurdish self-determination would threaten the territorial integrity of Iran, Iraq and Turkey, the Kurds, like the Palestinians, are invariably betrayed.

The Syrian Kurds lost 11,000 lives fighting Isis, only to be “ruthlessly discarded” by Trump when he gave a green light to the Turkish invasion of northern Syria in late 2019. As Turkish forces ethnically cleansed the Kurdish enclave of Rojava, Syrian government troops moved in to reoccupy the territory.

Despite his sympathy for the Kurds, Cockburn sees the realpolitik sense of Trump’s move. He was lucid about Washington’s five-year alliance with Syrian Kurds. “One day the Americans would have to choose between two million embattled Kurds in Syria and 80 million Turks in Turkey, and it did not take much political acumen to foresee what they would decide,” he writes.

Iraqi Kurds fared no better. Masoud Barzani, the president of the Kurdish Regional Government, made what Cockburn calls a gargantuan error of judgment in calling a referendum on Kurdish independence in September 2017. Iraq, Iran and Turkey, as well as the US, UK, France and Germany, condemned the referendum as destabilising. The Baghdad government used the landslide vote for independence as a pretext for seizing Kirkuk, which the Kurds had held since the US overthrew Saddam Hussein in 2003.

Cockburn’s account of the October 2016-July 2017 battle to drive Isis out of Mosul is particularly poignant. As Cockburn continued attempts to enter the besieged city, residents risked their lives to talk to him on the telephone about the terrible conditions inside. Civilians were faced with the horrendous choice of starving in their homes, where thousands were killed in US aerial bombardments, or running the gauntlet of Isis snipers in the attempt to flee.

Cockburn makes a powerful denunciation of double standards in western media. The US-Iraqi assault on Mosul was as fierce as the Syrian-Russian assault on Aleppo, yet only the latter was widely condemned. Media widely reported Syrian atrocities in the siege of eastern Ghouta, near Damascus, in 2018, but ignored Turkish atrocities against Kurds in Afrin, northwest Syria, the same year.

“I saw the same pattern repeated in wars in the Middle East and beyond,” Cockburn writes. Civil wars “were portrayed as black-and-white conflicts between a demonic dictator or movement (Saddam Hussein, Taliban, Muammar Gaddafi, Bashar al-Assad) fighting a pure-as-snow popular opposition.” The model was reversed when US-installed Afghan and Iraqi governments were attacked by “terrorists”.

If the West really wants to help Syria, it must accept that Assad is going to hold on to power, Cockburn writes. Recognition of this fact should be conditioned on a return home for refugees and an internationally monitored amnesty and freeing of prisoners.

Despite its many qualities, War in the Age of Trump suffers from poor editing. The title is misleading, since the book is limited to the past four years in Iraq and Syria, rather than Trump’s broader Middle East policy. It does not address Trump’s appointment of his son-in-law Jared Kushner to “solve” the Israeli-Palestinian conflict, or his continuing support for Saudi Crown Prince Mohamed bin Salman despite the grisly murder of the journalist Jamal Khashoggi.

Cockburn’s short summaries, printed in italics at the beginning of each section, are the most readable parts of the book. The rest of the text is comprised of reprinted articles, with many repetitions and disorienting references to “last week” and “last month” regarding events that took place years ago. It makes a hard slog for the reader, without the assistance of a timeline, index or chart of acronyms. If Cockburn and his publisher had used the articles as building blocks for a rewritten, smooth-flowing narrative, this good book could have been great.

Lara Marlowe is France Correspondent of The Irish Times