Those Were the Days, by Terry Wogan: a gorgeous love letter home

For his first foray into fiction the much-loved broadcaster brings it all back home, writes Ryan Tubridy 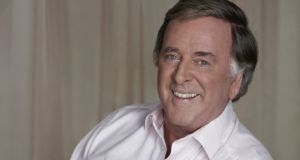 Terry Wogan: his book, “like the man himself, is effortless and entertaining”

Book Title:
Those Were The Days

When I was 15 years old, I went on a school tour to London, part of which involved sitting in the audience for Terry Wogan’s chat show which was riding high on the airwaves at the time. Curiously, I only remember that Paul Daniels was a guest, the rest is a blur. That is, apart from the show’s presenter, Mr Wogan, the chat show equivalent of Dean Martin. I recall vividly Terry’s laid back ramble onto the stage and his droll observations. He chatted amiably with the audience before being chastised by the floor manager for cutting it way too fine before showtime. Terry shrugged this off with a smile and made his way backstage with 30 seconds to go to transmission. And this is vintage Terry. He professes to hating long (if any) production meetings and effectively admits to doing little or nothing by way of preparation for his enormously popular radio show on BBC Radio 2, preferring to sit in front of the microphone and see what happens on any given Sunday.

Very little ever appears to phase the man. Even when there was an IRA bomb threat made against Terry, resulting in the evacuation of BBC studios, he laughingly reflected in a conversation we had in London once that the paramilitaries were clearly not his biggest fans as he was off air the day the threat was made. They should’ve listened . . .

And yet, for all the whimsy, wit and easy patter, there lies within this great Limerick man a survivor who always knew (and continues to know) the importance of staying relevant and close to, if not at the top of the game. This doesn’t happen without being made of stern, if subtle, stuff.

Down through the years he has stayed extremely loyal to his roots while living a parallel life as a British national treasure (an increasingly tired term but you get the point). A knight of the realm, he dines regularly with the Queen and attended Margaret Thatcher’s funeral. He took ambiguity to new levels as BBC’s Eurovision commentator, a role that saw Terry mix love and hate with outrageous skill, like a Tory minister at a club in Soho.

These days, Terry Wogan is reflective. I have firsthand experience of this as we chatted on radio recently and Terry mentioned that so many of his friends are dying that he feels like he’s standing in a church far too often of late, saying goodbye to lost friends. He’s in a wistful mood which may explain why he chose to write Those Were The Days, a gorgeous love letter of a book in which he draws on his memories of being a young banker living and working in Ireland.

In this work of fiction, we are introduced to an array of characters, largely from smalltown Ireland. Rather than take the pub or the church as a focal point, the former banker has chosen the place he knew best – the local bank – as the Rover’s Return (or McCoy’s Bar) of the piece. In what feels like a series of short stories, we are given a glimpse of an Ireland long gone, one where bank managers were addressed as “Sir” and carried some weight in the community. There are entertaining vignettes such as one in which a couple, Liam and Nuala, leave a dinner party early when guests start going on about their children’s achievements. There’s sadness too, as when two women in the bank discuss another woman whose son died because of a heart defect (a story that reflects a desperately sad moment in the Wogans’ lives). There’s nostalgia in abundance and Terry’s voice leaps off the page to the point that I could hear that distinct brogue throughout.

It’s a sweet book and Terry’s style, like the man himself, is effortless and entertaining. He might have left the bank behind but he will always be called Sir! Those Were The Days has a festive cover, clearly aimed at the Christmas market. But what is intriguing is that after so many years in England, Terry’s first crack at fiction writing is all about the past, all about home.

Ryan Tubridy’s latest book is The Irish Are Coming

The Goop Lab: One episode is about the vulva. I’ll probably watch that with my parents
5