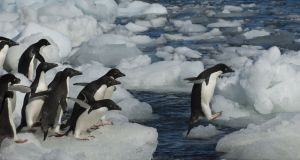 Book Title:
The Lamentations of Zeno

Zeno Hintermeier is angry. He is a glaciologist; he loves ice and its many shapes and qualities. He knows the ice cap is melting and continues to mourn the slow death of a glacier he began to monitor while a student. “Each time I visited I would first scan the glacier with my eyes, then test it with my feet. Whenever I stopped to catch my breath I would touch it, laying my hands on its flanks and then stroking my face, taking in its icy breath, its invigorating cold. I was familiar with every one of its sounds, the creaking and the clanking, every glacier has its own voice . . .

“A dying glacier sounds different from a healthy one, it gives off a powerful rattle when it bursts along a crevasse and if you listen closely you can hear the melt flowing into the underground lakes speeding the erosion of the wrinkled body.”

Zeno is not doing so well himself. Now in his early 60s, he is given to loudly expressing his exasperation at the destruction of the planet. His marriage went much the same way as did his erstwhile scientific career. As he says: “There is no worse nightmare than no longer being able to save yourself by waking up.”

Nowadays Zeno works as a tour guide on an Antarctic cruise ship. His one small comfort is his seasonal relationship with Paulina, a sympathetic young waitress who is part of the catering staff. Wary of the self-satisfied motivations of many of the tourists and clearly not that fond of his employers, the narrator is caustic yet likeable.

At times it feels as if Zeno could have wandered out of the pages of a Saul Bellow novel, or even more possibly, one of Joseph Heller’s cries from the heart of madness. High praise is due to Ilija Trojanow’s American translator, Philip Boehm, who not only conveys the persuasive and conversational tone of the narrative voice, but is sensitive to the subtle beauty of the imagery. Zeno is blunt, practical, despairing and, above all, a grief-stricken romantic.

Bulgarian-born Trojanow has travelled the world. His parents sought political asylum in West Germany in 1971 when he was 7. The family then moved to Kenya, where his engineer father had accepted a job. He first emerged as a travel writer, and in Germany co-founded a publishing house specialising in African titles. He has also lived in India. It is not surprising that he would write a wonderful novel, The Collector of Worlds (2006; English translation 2008) based on Sir Richard Burton, the Victorian travel writer, explorer and translator of an uncensored Arabian Nights.

Trojanow’s forthright concerns about global surveillance and the activities of the National Security Agency caused him to be denied entry to the US in 2013 when en route to an academic conference. The Lamentations of Zeno is a topical polemic about global warming and climate change.

Yet the narrative voice and the story, which evokes a sense of a calculated holiday mood, presents a close-up examination of the various ways in which people will ignore the obvious. It is a novel about compromise in which the energy is sustained by a subtle, if seething irony.

“Standing braced on the weather deck of a pitching cruise ship, taking in the gale, the storm, face lashed by wind and spray, having the breath knocked out of the lungs, at the mercy of the elements and frozen through after only a few minutes no matter how many layers of high-end high-tech material – passengers can enjoy a brief taste of the deprivation of a bygone era, just one door removed from the warm cabin from where they can witness nature unleash its force through a glass pane as though they were watching a prizewinning documentary.”

It all begins in Ushuaia, the southernmost city in the world and the location for several scenes in Alejandro González Iñárritu’s The Revenant. Just as the landscape dominates that movie, here a powerful physical sense of the Antarctic and the wildlife, which the tourists have come to photograph without being concerned about the impending man-made disaster, emerges to counter the human presence and its unfailing ability to transform nature into a theme park.

Early in the novel, a character is asked how many whales she has spotted. The answer is only one – and it was made of stone. “The thing looks massive enough that it might actually stand the test of time, too.” She also notes the “trashcan bench trashcan bench” topography marring a path through the forest.

When she then makes a random comment about the phrase “primitive natural tribe” and asks where a phrase like that comes from, Zeno retorts: “We honor the people who are extinct, we put their masks on display and print their portraits in sepia, we show enormous care and devotion to those we have exterminated.”

Grumpy and angry Zeno may be, this important little book is not without humour and pathos. Once the ship and the action moves out to sea, the endangered paradise reveals its unique geography, its wildlife and the harsh realities of survival. A good-hearted tourist attempts to save a chinstrap penguin’s egg after a skua had swooped in and snatched it. Mrs Morgenthua unexpectedly foils the skua, but on returning the egg to the penguin is attacked. In her terror, she falls on another penguin and kills it.

First published in Germany in 2011, a year after Ian McEwan’s amusing, if calculated farce Solar, The Lamentations of Zeno is half the length and twice as good. Whereas McEwen’s boorish Michael Beard is a grotesque cartoon clown, Zeno is a convincing, world-weary Everyman with a suitcase packed with personal regrets and real fears for Antarctica. The novel’s most enduring impression is of the real Antarctica complete with its many ghosts.

Trojanow has set out on a particular expedition: to unsettle. This wise, cunning book, which does indeed possess the complex depths of an iceberg, achieves exactly that.