The Fight (1975) by Norman Mailer: Feel the punch of a heavyweight 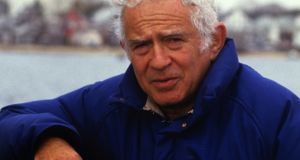 In this newspaper Norman Mailer was recently written off as “a bad joke”. Mailer, with his oeuvre as big, brash and brilliant as the American century that birthed him! The goad cannot pass unchallenged, so here I am in Mailer’s corner, pouring water in his mouth and rubbing his shoulders till he gets back up for another round.

There are two kinds of reader I can imagine loving The Fight as much as I do: those who have an interest in boxing, and everybody else. Mailer’s account of the 1974 Heavyweight Championship fight in Zaire between Muhammad Ali and George Foreman has all the dramatic tension of a novel even though we know how it’s going to end. Mailer is no disembodied observer: “Now, our man of wisdom had a vice. He wrote about himself. Not only would he describe the events he saw, but his own small effect on events.”

Little wonder Mailer has such sympathy for these titans: he fell on his ass a few times

Mailer has been sunk in unfashion since a literary generation of American Nice Guys derided him and his peers as the Great American Narcissists. With writing this incandescent, though, one can wait in confidence for the decrees of public taste to veer back around. From the opening paragraph, Mailer’s pugilistic prose comes out swinging to mark the human glory of Muhammad Ali: “Women draw an audible breath. Men look down. They are reminded again of their lack of worth.”

The stink of testosterone is high, with nary a female in sight as Mailer stakes out both camps in the weeks before the fight, drinking and bantering with Don King, Hunter Thompson, Joe Frazier. Mailer realises he is not there merely to cover a fight. With a reckless candour foreign to today’s eggshell-walking writers, he probes “his own outsized feelings of love and – could it be? – sheer hate for the existence of Black on earth”. The fight itself reads as a planet-quaking clash between two black gods. Little wonder Mailer has such sympathy for these titans: he fell on his ass a few times, but he only ever wrote like a heavyweight.