The best picturebooks of 2016: the eyes have it 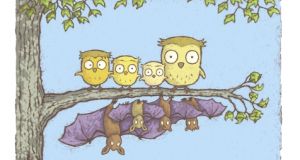 It’s looking a lot like Christmas in the bookshops, and picturebooks are flying off the shelves. Among the high-flyers from 2016 must surely be the bats and owls in Marie-Louise Fitzpatrick’s Owl Bat Bat Owl (Walker Books). Mama Owl and her three little owlets slumbering peacefully on a branch are dramatically woken when Mama Bat and her family of three arrive to hang downwards – as bats do - on the same branch. The interplay in this clever wordless picturebook is all about the accommodation of one species for another, and their eventual co-operation when a violent wind shakes them all from the branch. Wordless books offer children – and adults – multiple opportunities to tell and retell a story, and here the eyes definitely have it as Fitzpatrick skilfully uses her characters’ expressions to show readers how Bats and Owls become friends.

Still in sleepy-time mode, Chris Haughton’s little bear is determined to stay awake a little bit longer than the other animals in the forest in Goodnight Everyone (Walker Books). His struggle with sleep will be familiar to children – and their grownups – everywhere. Haughton’s familiar stylised images, vivid palette and distinctive typeface are brilliantly employed here to create a warm tale that is sure to demand many rereadings, and not only at bedtime.

Because so many fine books are produced in English, readers can be disadvantaged by not having access to books originally published in other languages. But this is beginning to change, and books like Marianne Dubuc’s Here Comes Mr Postmouse, translated by Greet Pauwelijn (Book Island), are now available in English. There is an enormous amount to look at and talk about on each generously-sized page, keeping readers alert as they follow Postmouse’s deliveries. These extend from post for the inhabitants of the local forest to those who live farther afield like Mrs Octopus in her undersea home and a family of mountain-top goats, and even Mr Yeti gets a package.

Quieter in tone, but still providing a great deal to look at is Jo Ellen Bogart and Sydney Smith’s verbal and visual retelling of the old Irish poem Pangur Bán in The White Cat and the Monk (Walker Books). Sure to attract adults wondering what to give a child in their lives, Smith’s simple, atmospheric images and the hand-lettered text beautifully encapsulate the ninth-century poem by a monk about his cat.

Picturebooks are for all ages, so moving up the age-range, we come to Cloth Lullaby: The Woven Life of Louise Bourgeois by Amy Novesky and Isabelle Arsenault (Abrams). As a child in France, Bourgeois learned the skills of the weaver which she utilised in her work as an artist in cloth, metal and many other media. Arsenault’s images rendered in ink, pastel, pencil, watercolour and photoshop provide a stunning interpretation of the artist’s life and work in a beautiful and well-constructed picturebook.

Construction is also integral to A Child of Books by Oliver Jeffers and Sam Winston (Walker Books). In one of the most original picturebooks of the year, a young girl and boy sail across a sea of words into a world of stories. Typographical land- and seascapes are crafted by Winston from cut-up pages of classic children’s books, complementing Jeffers’s sketchy images and hand-lettered text. A satisfying book that reminds us we are made from stories.

William Grill brilliantly evokes a landscape inhabited by wolves in his narrative non-fiction The Wolves of Currumpaw (Flying Eye Books). Grill’s atmospheric coloured-pencil drawings evoke 19th-century New York and the New Mexico desert in a series of double-page spreads and smaller vignettes, relating the story of Ernest Thompson Seton, a wolf-hunter turned conservationist. Set on capturing Old Lobo, the massive leader of the wolf pack of Currumpaw, Seton first captured and killed his mate, Blanca. However, once captured by Seton’s lure, Lobo died of a broken heart, and something in Seton changed forever, causing him to dedicate his life to the preservation of wildlife.

New York City is the centrepiece of NY is for New York by Paul Thurlby (Hodder Children’s Books). Each double-spread features an iconic part of NYC life through a letter of the alphabet, starting with the American Museum of Natural History and ending with the Bronx Zoo, and a piece of often quirky information about each locale adds to the interest. Looking out for a tiny gorilla hiding discreetly in each scene draws the reader in to the spacious pages too. These pay homage to the travel posters of the early mid-twentieth century, but Thurlby updates the retro-look with a clarity and crispness of his own in a stunningly crafted picturebook for all ages.

For all ages too, despite its title, is The Moon Spun Round: WB Yeats for Children, edited by Noreen Doody and evocatively illustrated by Shona Shirley MacDonald (O’Brien Press). Some of Yeats’s best-known poems are presented here, along with two stories by Yeats, and biographical information about the poet. Perfect for winter nights by the fire.

To finish, a bit of seasonal snow in Chris Judge’s The Snow Beast (Andersen Press), now released in paperback. Judge’s familiar Beast chases the Snow Beast across wintry landscapes in an effort to save his village’s festival celebrating the first snow-fall. All good fun in this delightful stocking-filler.

Seasonal also, is Anne Booth and Sam Usher’s Refuge (Nosy Crow) which sets the nativity story, told from the point of view of the donkey, in the context of the current refugee crises. It is beautifully told for young readers, but really for all ages, including those who do not celebrate Christmas. Usher’s artwork in black and grey washes enlivened by darts of colour wonderfully complements a familiar story here rendered afresh, and is ultimately full of hope, as the family eventually finds a refuge and hospitality in Egypt.

It’s been a good year for picturebooks and this is the time to share and enjoy them, so happy reading one and all.

Valerie Coghlan is a lecturer and teacher with a particular interest in picturebooks and graphic novels for all agers (children and adults). Currently, she contributes to Masters courses in Trinity College, Dublin and St Patrick’s College, DCU. She is a former review editor of Inis, and is currently Chair of the Board of Children’s Books Ireland