The 32 Irish merchant sailors enslaved by the Nazis

How my father-in-law’s memories became my book, Forgotten Hero of Bunker Valentin – The Harry Callan Story 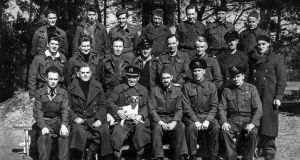 In January 1941, my father-in-law, Harry Callan, became a prisoner of war, when his ship the Afric Star was attacked by a raider and scuttled. This information and the trauma of Harry’s recurrent nightmares were all his family knew. We quickly learned that it was not a subject for discussion.

In 2005, 60 years after his liberation, Harry participated in a scheme called the Heroes’ Return. Funded by the British Legion, it enabled former POWs to return to the places of their incarceration for the annual liberation commemoration ceremonies. The scheme was facilitated in Ireland by Peter Mulvany of the Irish Seamen’s Relatives Association. While on this trip to Bremen-Farge, Germany, Harry, one of 32 Irish-born British Merchant seamen, discovered that there were no records of him or his fellow Irishmen at the camp. Determined to correct this, he began working with local historians and intellectuals.

In January 2012, at the age of 88, Harry realised that he was the last survivor of the 32 and that, if he did not speak now, what happened to them would never be known, so I agreed to record his words. For the next six months, I went to Harry’s house every morning at 8.30am with my recorder. By 10am we were ready for a coffee break; coffee plays a significant role in Harry’s life. That is why, when RTÉ radio’s Documentary on One recorded his return to Germany, they called the programme Clouds in Harry’s Coffee.

Some mornings I braced myself for what I had to hear, particularly the harrowing experiences that Harry recounted. I learned the type of questions to ask and when to ask them; when to lighten the mood; when to let the silence lengthen and when to say, “Enough”. We would then go for a walk so that Harry could sleep with no nightmares. Each evening, I transcribed what I had recorded that day. As the months passed, I began to realise that this was an important story, not just a piece of family history. We made a pact: he would forget that I was his daughter-in-law and tell me everything; the good, the bad and the unspeakable and I would be true to his words, at all times.

I researched the history of Nazi camps in which servicemen were imprisoned. I studied the various ships and U-boats which featured in Harry’s story and the service records of their Kapitäne. I contacted the British Merchant Seamen’s Association, who willingly helped me by explaining ship’s terminology; shipping routes; ships’ histories and patiently answered all my questions. It was they who visited the UK National Archives, Kew, and tracked down records of Harry’s comrades for me. I also contacted the Württemberg State Library, where the German Navy Archives are housed, and they forwarded me ships’ photographs and graciously gave me permission to use them. I immersed myself in historical books, war trials and POW memoirs of the period, 1939 to 1945. I travelled to Germany with Harry, visiting the places of his incarceration: Stalag XB Sandbostel; Milag Nord Westertimke; Bunker Valentin Bremen-Farge and the former Arbeitserziehungslager (Labour Education Camp). I met Harry’s German friends, who had been children during the second World War, and local historians at the various interpretive centres.

I had never written anything before. Nervously I sat at my keyboard, listening to Harry’s Derry accent in my headset and thinking to myself, where do I begin? I decided that I would start with Harry’s childhood and early days at sea; the middle part would be about his imprisonment, liberation and life after the war; the final part would be his return to Germany. Eventually, by June 2014 I had the bones of a story that definitely needed to be told and I sought the help of my friend, Helen Dempsey, who had taught creative writing and whose studies included Holocaust literature. For more than two years, we worked long hours; researching, editing and fine tuning my manuscript. Along the way, Helen gave me a crash course in creative writing.

The result is Harry’s story, written in his own voice, as I heard it on those tapes. Forgotten Hero of Bunker Valentin – The Harry Callan Story is an authentic eyewitness account of a POW in Nazi Germany. It is also the memoir of my father-in-law, whose only desire is for the truth about the 32 Irish-born British Merchant seamen to be recorded and remembered by future generations. It has been my privilege to visit Germany with him to witness the forgiveness and compassion he has for the German people; his interaction with the young students of the region and in turn, their respect and love for him. By writing this book, I hope that some of the Irishmen’s families will find closure and that Harry, now in his nineties, will have peace of mind.

Michèle Callan is the author of Forgotten Hero of Bunker Valentin – The Harry Callan Story, published by The Collins Press, at €14.99. It was launched on March 23rd by Commodore Hugh Tully, Flag Officer Commanding Naval Service. It is available in all good bookshops and online from https://www.collinspress.ie/forgotten-hero-of-bunker-valentin.html