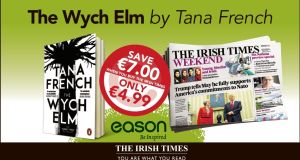 The Wych Elm by Tana French is this Saturday’s Irish Times Eason offer. When you buy the paper, you can also buy the bestselling thriller for just €4.99, a saving of €7. Read our review and our interview by Anna Carey to whet your appetite. French’s Dublin Murder Squad series has been adapted for television and is coming to our screens this month. Peter Crawley’s report from the set is in tomorrow’s Ticket.

To celebrate the poetry of Gerard Fanning, friend and fellow poet Gerald Dawe will give a talk entitled Gerard Fanning: Poet of the County on October 17th at 6.45pm in the Studio Theatre, dlr LexIcon, Dún Laoghaire. Joining Gerald will be poet and novelist Conor O’Callaghan, actor Cathy Belton and piper Mick O’Brien.

Books Upstairs has just opened a second-hand department on the first floor of its premises at 18 D’Olier Street, Dublin. It carries a wide range, including a particularly good stock of Irish-interest titles. Maurice Earls explains: “As we had the space, loads of books gathered over the years and a collection of paintings which needed space to be seen, it was probably an inevitable development.”

Tomorrow’s books coverage includes an exclusive extract from Children of the Troubles by Freya McClements and Joe Duffy and from Brian O’Connell’s The Personbals about the world of small ads; Pat McCabe talks to Peter Murphy about The Big Yaroo, his long-awaited follow-up to The Butcher Boy; Trinity professor Luke O’Neill talks to Patrick Freyne and his young relatives about his book on science; and in Magazine, Margaret Ward explores the phenomenon of ordinary people hiring ghost writers.

Reviews include Fintan O’Toole on Tim Robinson’s Experiments on Reality; Rabeea Saleem on The River Capture by Mary Costello; Andrew Gallix on Sontag: Her Life by Benjamin Moser; Helena Mulkerns on Akin by Emma Donoghue; Sinéad Gleeson on Make it Scream, Make it Burn by Leslie Jamison; Helen Cullen on The Dutch House by Ann Patchett; Paul Clements on local history; Kerri Ní Dochartaigh on The Jewel by Neil Hegarty; Sarah Gilmartin on A Drop of Patience by William Melvin Kelley; and Declan Hughes on the best new crime fiction.