Kenneth Payne explores the warped thinking of political and military leaders in the Vietnam War, which ended 40 years ago this week, and draws parallels to recent crises – gradual escalation, progressive entanglement and emotional commitment to a course of action 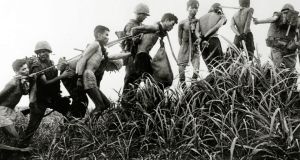 US marines with Viet Cong prisoners in 1965: “it seems a little crazy now, but [the Pentagon] was convinced that force could be used as a form of communication with the enemy – if you do this, we shall punish you; back down now, or we escalate. It was war as a violent conversation: a rational, deliberate and calculated conversation. And, of course, it didn’t work.” Photograph: Getty Images

This week, it’s 40 years since their war in Vietnam ended in a comprehensive and shattering defeat for South Vietnam and its US patron. A decade earlier, some bright American foreign policy intellectuals tried really hard to make strategy rational. The whiz kids of Robert McNamara’s Pentagon saw war as a bargaining process, a special type of negotiation through force. And being mathematically inclined, some of them even attempted to model the process, using sophisticated game theory. Perhaps it seems a little crazy now, but they were convinced that force could be used as a form of communication with the enemy – if you do this, we shall punish you; back down now, or we escalate. It was war as a violent conversation: a rational, deliberate and calculated conversation. And, of course, it didn’t work.

That might seem like ancient history, yet the same inclination to see strategy as a detached, rational process still shapes strategic thinking, even if the maths models are somewhat out of fashion. Perhaps that’s inevitable – after all, there has to be some method that seeks to anticipate the effects of force. But in the real world, rationality is richer and more human than it seems in the abstract. We are emotional decision-makers, and our unconscious mind makes many decisions for us, without troubling our limited conscious attention. As Clausewitz reminds us, war involves passion as well as reason, no more so than once the shooting starts. In my favourite line, he argued compellingly that “action can never be based on anything firmer than instinct”.

And so we see some familiar themes in recent crises – the gradual escalation of commitment, the progressive entanglement, the sunk costs that we refuse to walk away from, the emotional commitment to a course of action. Rolling Thunder, the Johnson administration’s bombing campaign to force Hanoi to back down, looks familiar to students of recent allied campaigns in Bosnia, Kosovo, Libya and now Syria. Each time, we do a little, hoping it will be just enough. Often we take the low cost, incremental option, especially if it involves air power.

And yet, with each escalation that fails to deliver, the temptation is to up the ante. A psychologist calls that “prospect theory” – the tendency to gamble more readily when losing ground. Psychologists also note our tendency to punish when we are thwarted by someone not playing fairly by our rules of the game. The “pissant” Vietnamese really got to President Johnson and to Henry Kissinger, who thought them “insolent”. Why wouldn’t they just understand American power and back down?

Angry, frustrated and piqued, successive administrations pressed on, convinced of the need to communicate resolve and attain credibility. President Johnson thought that ultimately only he knew why he decided the way he did on Vietnam – but that’s optimistic: I’m not convinced that he, like any of us, could truly know himself and understand the forces shaping his decisions. If that was so in Vietnam, it still is today.

In fairness, the Obama administration has done better than it might in avoiding some common psychological pitfalls. There’s been a reluctance to escalate, even under pressure from more adventurous political figures, not least because the reminders of foreign entanglement are so strong and recent. If anything the administration has garnered a reputation for slow deliberation, even procrastination about strategic choices. But there is no getting away from it – in an uncertain, complex world, strategists make judgments about risk, and in doing so, they are susceptible to the same sort of cognitive shortcomings as the rest of us - emotional, social and with a selective view of the past to draw on for guidance, and a prickly sense of esteem and self-righteousness.

Vietnam is an excellent case study, because many of us are familiar with the broad contours of the war, and because the strategising has been well documented – there are presidential audio recordings, and the voluminous Pentagon papers to wade through, even before you get to the secondary literature. Also because the simplifications made by the strategists turned out to be so wide of the mark – wrong about the Vietnamese, and unreflective too about their own shortcomings. But the point is larger than Vietnam, fascinating episode though it is. The real point was made by Clausewitz two centuries ago: strategy, as he saw it, was fundamentally about psychology, and yet, he confessed, there was so much that was unknown about that mysterious science. That makes his insights all the more remarkable, but two centuries on, we can certainly do more, both as scholars and practitioners of strategy, to understand the complexities of human rationality.

Kenneth Payne is a political psychologist and lecturer in Defence Studies at King’s College London. He is also a research associate at the Centre for International Studies, Oxford University. His book, The Psychology of Strategy: Exploring Rationality in the Vietnam War, was published by Hurst in London last month.