Sand review: hold on to your hats – and stomachs 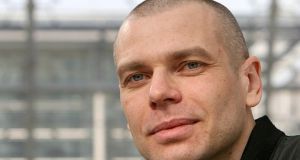 It is 1972 and back in stately old Europe Palestinian terrorists have just massacred 11 Israeli athletes and coaches at the Olympic Games in Munich. As the world watches on in horror, details of vicious torture prefacing the killings provoke further outrage. Calls to abandon the games are ignored. Meanwhile somewhere in the Sahara desert, a madman arrives at a predominantly American hippie commune and leaves four people dead, apparently all for a plate of fruit and a suitcase crammed with worthless money.

German original Wolfgang Herrndorf’s anarchic, brilliant and very funny thriller is like no other book, although it may help to think Catch-22 or even better, William Gaddis’s Carpenter’s Gothic. It must be said that Herrndorf’s dialogue stands equal to that of Gaddis and Thomas Pynchon, no mean feat, and it is masterfully rendered by translator Tim Mohr on inspired form.

Sand is a clever, outrageous demonstration of hold on to your hats – and stomachs – storytelling which is also strongly cinematic; the publishers have already referenced the Coen Brothers, and to that endorsement include Quentin Tarantino.

A dazzling cunning is at work. Herrndorf who trained as a visual artist and was terminally ill while writing Sand, killed himself at the age of 48 in 2013 soon after its initial success in Germany was acknowledged. He delighted in vivid images and this wry novel abounds with moments suspended in time. His characters are desperate, despairing and, with the exception of the hapless ‘Carl’, largely unpleasant.

The conversational tone of the narrative voice contrasts with the frenetic pace and if ever there was a novel ideally suited for an uninterrupted read through a long night, this is it. The chapters are short, yet invariably leave the reader reeling if eager to continue. “And now Lundgren had a problem. Lundgren was dead.”

Yet it all begins so calmly, with an eccentric teacher calling his children less to class and more to learning. There is an air of benign community. And so the sun rises “and shone down on the living and the dead, the believers and the non-believers, the wretched and the wealthy.” How gentle, how wrong – considering the mayhem about to be unleashed; Herrndorf wants his reader to feel exhilarated but also bewildered and aware of having read something that will be difficult to forget.

But first to the initial crime; the dastardly attack at the commune. Manning the investigation is Polidorio who doesn’t want to be in Africa at all. “It had been two months since Polidorio started his job here. And for two months he’d wanted nothing else but to return to Europe.” His grandfather was an Arab but had emigrated to France when he was young. Polidorio had a French passport but, following his parents’ divorce, grew up in Switzerland. Later he studied in Paris. “If his serve had been better, he might have been able to become a tennis pro.” Instead he became a policeman.

As the novel opens Polidorio is fretting about having only scored only 102 in an IQ questionnaire intended for French school children aged between 12 and 13. Admittedly, he was drunk at the time, as was his sidekick, Canisades, a charming liar who managed to do better, achieving 130.

The two men have little interest in solving the crime. It is an effective comic curtain raiser which then acquires darker complications but soon loses any lingering significance as the central story, which is introduced as almost a tentative aside, develops.

Amid the sun, the heat, the relentless sand and the screaming children, all of which are described with stylistic panache, a man, lying in a deserted barn, slowly returns to consciousness: “The radiance. The silence. He tried to turn his head and felt pains he couldn’t pinpoint. As if a fist were trying to push his eyes out of his head from the inside . . . With his hand he felt around and, where he had expected to find a hole in his skull, found a giant lump. Dried blood and slime. They had smashed his head in. Why?”

From this point onwards, a fine novel which had been immensely appealing shifts onto an even higher level of excellence. The injured man is disoriented and in pain. Worse is to follow: he can’t remember his name. A stranger armed with a pitchfork stands between him and flight but a heavy weight falling from the roof of the barn settles that and the nameless man runs out into the empty desert.

The nightmare sensation of stumbling through sand becomes important. Through a series of chance twists the fugitive, who appears to have slightly Arab features and is handsome, reaches a service station just as Helen, a cold, resourceful American woman and another central character, arrives. Having managed to fix a hire car that was out of action, she proves to be able to clean up any mess, including the nameless man’s head wounds. Despite being warned not to get involved, she remains calm while the man, soon to be called ‘Carl’ from the label in his jacket, begs her to take him with her – and she does.

Nothing is at it seems and Herrndorf enjoys the languid ambivalence which he sustains throughout. Even at its most comic, there is a compelling darkness about Sand. While in the comparative safety of Helen’s keeping – he moves in to her hotel chalet with her – Carl continues to suffer misadventures. He is beaten and questioned by various baddies. But his memory remains blank.

Eventually he is brought to a dodgy psychiatrist, Dr Cockcroft, who works from a hotel, in a room with two books. It is a hilarious, very strange sequence. All the while Carl becomes increasingly sympathetic and his ordeals multiply. A strange woman who seems to know him offers him sex, while a crazed young drug addict taunts him for drugs. After all the beatings he finds himself in a shocking plight, chained in muddy water. He makes a bold bid to live. Herrndorf does not make it easy for anyone, in a bravura performance bound to keep one guessing.