Review: The Private Life of Plants, by Lee Seung-U 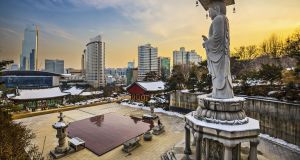 Images from a movie he had once seen dominate the thoughts of the young narrator as he negotiates with a feisty prostitute in Lee Seung-U’s complex study of a family’s curiously stoic attitude.

The narrator’s requirements are specific, causing him to sound more like a recruiting officer. Sex is far from his thoughts. Various demands are barked at the girl, such as confirming her height and age. He then orders her to wipe off her thick makeup and remove “those gaudy earrings”. She shouts back at him. Even so, “grinning quizzically, she hopped into the car”. He makes no attempt to conceal his irritation and wonders if he resembles the man in A Taste of Cherry, the film by the Iranian director Abbas Kiarostami, in which the central character is searching for a person to bury his body after his suicide.

Lee establishes his guilt-ridden narrator’s voice so convincingly in the opening pages of this intriguing story, about a semi-estranged married couple more paralysed by the legacy of damaged love than by their elder son’s catastrophic plight, that one simply reads on, intent on explanations that eventually emerge.

As the narrator drives off, aware that the girl’s muddy shoes will soil his car, the bickering continues. He has no interest in her services; he is acquiring them for his brother. Then the truth begins to seep out. Influenced by his reading of 19th- and 20th-century European writers, Lee prefers a slow release of detail. The narrator’s brother, a former golden boy gifted in all things, including photography, and his mother’s favourite, has lost his legs in a military accident. He is now given to horrific fits that involve uncontrollable sexual urges. It is left to his silent, detached mother to carry him on her back to the nearest brothel.

It all seems a bit drastic and unintentionally funny. Yet the narrator is so credible that instead of a black comedy it quickly develops into a human tragedy for which the narrator assumes the blame, although it all has far less to do with his selfish actions than he suspects. For him it began when he fell desperately in love with his older brother’s girlfriend. His hapless crush on Soon-mee became a vindictive obsession. He stole his brother’s prized camera and sold it, just to get even. He left home and secured a lowly job running messages.

But all of that belongs in the chaotic past. Finally, chance has brought him back home and into a very different family life.

Some things have not changed; his quiet father continues to take comfort from plants, tending his garden with devotion akin to romantic love. As the title suggests, plants, particularly trees and their mythological symbolism as the shapes thwarted lovers assume, are vital to the story. Trees offer consolation as well as spiritual sanctuary. Above all, they are witnesses of human history. Lee never forces his theme; it evolves naturally.

The narrator’s work experience motivates him sufficiently to open a detective agency. A client requests that he track a woman. The subject happens to be his mother. From this odd commission the story acquires both mystery and logic. After all, his mother, who now owns the restaurant she had once worked in as a girl, is a mysterious character with secrets of her own.

That extreme image of the mother carrying her double amputee son to brothels as well as the humiliating treatment of the young prostitute may give the impression that this is a brutal novel. It is not. The laconic narrator soon emerges as likeable and bewildered, and certainly remorseful. His guilt sustains the story and it also helps him to understand the people closest to him.

Early in the narrative it may seem that Lee is entering territory similar to that explored by another Korean writer, Han Kang, in The Vegetarian, a brilliant and menacing account of one woman’s collapse into apathy, in which Han makes clear the plight of women in a macho society. Lee shares her views, yet his methods are very different: his narrator remarks that housewives seldom ask questions. “It’s true, too, that most women in this country have little knowledge of their husbands’ life in the outside world.”

A less intuitive writer could have made this poignant and unexpectedly delicate, at times philosophical, and often wordy novel appear ponderous. Lee, a one time seminarian who later studied theology, avoids these flaws through the cohesion of his narrator’s sharpening perceptions. There is also of course the investigation he undertakes for a client, which proves crucial, as it helps lead the way towards the various secrets.

Set largely around modern Seoul, the action also includes excursions into a dense and vividly described countryside. These interludes allow Lee to engage in further variations on his theme of trees and plants. The narrator’s mother sets off on a journey and refuses the narrator’s offer to drive her to her destination. As the novel progresses he appears to have intensified his growing awareness of his parents as individuals. Watching his father watering the plants, he reflects: “The darkness pressed in around him, his curved back made him look old and sad. My heart was flooded with sympathy for him. Had he ever been happy? For some reason he had never looked happy . . .”

It is as if the narrator, now a grown man, but still the younger son who always disappointed his parents, finally sees them as they are: “ . . . everyone who knew my parents noticed that my mother wasn’t warm or affectionate toward my father and come to think of it, my father acted the same way toward my mother . . . It wasn’t a tense relationship either.” He notes: “the indifference, the minimal dialogue, and non-interference in each other’s lives . . .”

The narrator develops sympathy for others. As he watches his mother while she waits outside the brothel he recalls that she had worn a similar expression, years earlier, when standing by the gate of his prep school, when he had been taking his exams.

Late in the story he concedes that he doesn’t have the right to offer comfort. He sees his words as being those of someone “who had never experienced great pain . . . My thoughts and actions had never truly stepped outside the boundaries of reality. This was what had caused my alienation from my family . . .”

The Private Life of Plants is inspired by Lee’s foremost concern as a writer: “what goes on in people’s heads”. It is the narrator’s journey towards emotional intelligence that gives this quiet, redemptive novel an unexpected power. Dysfunctional families have become stock source material for fiction. This novel possesses a rare edge; it may not be funny, but it certainly feels real.