‘In reality, it was a boozier Bloomsday organised by the cast of The Inbetweeners’: a Dubliners tour of Dublin pubs 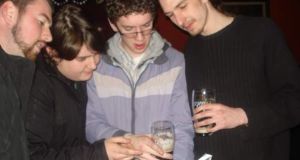 Ten years ago I was a law student at UCD, and the city which had become my second home was about to be snatched away from under my feet. I wasn’t very committed to studying and because I didn’t take good care of myself, a lot of time was spent dealing with protracted bouts of illness.

In the midst of all this, one of the things which gave me enjoyment was my role as events officer for the university’s English Literary Society. This sounds more important than it was, since the society only had a dozen or so members and most of what we talked about were the merits of Guinness against the comparatively cheaper pints of Beamish to be found in the campus’s Forum Bar.

Hours would be spent taste-testing one against the other, palate-cleansing with the occasional bag of bacon fries whilst some mid-week Champions League game flickered away in the corner. It was during one of these sessions that we conceptualised Publiners; a four-pub crawl through the city centre which we’d base on the locations from James Joyce’s Dubliners.

We conceived of it as an annual event to celebrate James Joyce’s birthday on February 2nd. It would keep up its pretence of being a literary event by including readings in each of the pubs, and at the end of the crawl, we’d put some money behind the bar to buy a drink for whomever was left standing. We’d procure this money from the university, under the stipulation that an event like this would contribute to the artistic and cultural life of UCD’s student population.

In reality, it was a boozier Bloomsday organised by the cast of The Inbetweeners. Most of us were in our early twenties or younger, and had never managed a budget for anything larger than a whiparound on pizza night. When the first Publiners was held in 2009, it was so popular that we had to take funds from the society’s literary magazine to facilitate buying everyone a pint in the last pub.

Our first stop was Davy Byrne’s on Duke Street, name-checked in Counterparts and described by Joyce in the following passage: Nosey Flynn was sitting up in his usual corner of Davy Byrne’s and, when he heard the story, he stood Farrington a half-one, saying it was as smart a thing as ever he heard.

Indeed, being in Davy Byrne’s was like stepping back into the Jazz Age. The bar men still wore bow ties, starched white shirts and waistcoats. The decor was full of marble table tops, tall brass lamps, and bright, off-white wood panelling. If ever there was a metaphor for post-Celtic Tiger Ireland it was this: two dozen beer-drunk students in hoodies and scuffed trainers fielding dirty looks from the financiers who drank there as regulars. It felt somehow like we were reclaiming Joyce as the laureate of an earthier Dublin. It felt like we were sticking it to these men and women for whom Joyce was nothing but a daily quote on an office calendar.

From there we made our way to O’Neill’s on Suffolk Street, also name-checked in Counterparts, after Farrington – the alcoholic protagonist – has a falling out with his boss. Unlike Davy Byrne’s, O’Neill’s had the look of somewhere which hadn’t changed in the intervening century. Still with that safe… dark snug tucked away in the corner of the front bar. Still with that clientele with faces the colour of dark wine, or dark meat.

O’Neill’s is my favourite pub in Dublin. Even now, when I’m down for a magazine launch or literary event, no visit feels complete without a pint on one of its dark mahogany stools. Even when people who still live in the city insist that it has become a pub for rugby tourists, I tell them that it doesn’t matter. The places we attach to continue on regardless. O’Neill’s has been standing for roughly 300 years and the ghostly voices of its former inhabitants still echo warmly within its walls.

The third pub on our list was Mulligan’s on Poolbeg Street. Tucked away on one of the smaller thoroughfares near the Irish Times building, the pub has a long history of famous patronage. From Brendan Behan to Brendan Kennelly, John F Kennedy, Seamus Heaney and Judy Garland all drank here. Not to mention that it is reputedly haunted by the ghost of an American tourist whose ashes are interred in the pub clock. Mulligan’s feels oddly unpretentious despite all this.

Fittingly it’s here that Joyce places his Counterparts protagonist, Farrington, in an arm-wrestling match with the cheapskate Weathers. Whenever we arrived we immediately ordered a round of 25 Jameson & red TKs. There was a huge, tobacco-stained pier glass propped up against the ochre-coloured wall of the parlour, and for anyone interested boxes of snuff were available behind the bar.

The last pub on our tour was, oddly, the only one not mentioned in Counterparts: The Oval on Abbey Street, which was destroyed during the Easter Rising before being rebuilt in the 1920s. In Joyce’s day it was Thomas Egan’s, and in the story Two Gallants he mentions it to illuminate the hazy aftermath of a billiards match: At this Lenehan said that he had been with Mac the night before in Egan’s. The young man who had seen Mac in Westmoreland Street asked was it true that Mac had won a bit over a billiard match. Lenehan did not know: he said that Holohan had stood them drinks in Egan’s.

Because The Oval was the last pub on our tour, we had the foresight to call ahead and let the bar staff know that we would be coming in near closing time. We thought we were being polite but when we arrived, the manager seemed peeved and was reluctant to pour anyone their complimentary drink. This despite the fact that we were putting over €100 behind the bar.

The pub is gorgeous, though, and I’ve been back many times since. The high ceiling, black and white diamond tiles and faintly dusty air always makes me think of the faded glamour of Belle Epoque Paris, and for such a central location it’s surprisingly short on tourist footfall.

This list is by no means exhaustive. In 2012 Colm Toibín speculated about whether the pub in Grace, where Mr Kernan fell down the stairs, might not have been Joseph Kehoe’s on South Anne Street. McAuley’s on Dorset Street (latterly The Big Tree) closed its doors for the last time in 2018 and is similarly name-checked in Grace. Bewley’s gets a mention in A Little Cloud and the Shelbourne Hotel is mentioned in After the Race, but at the risk of sounding like a pub snob, neither would have felt like authentic Joycean pub choices for a crawl.

Bewley’s – though it serves alcohol – is primarily a tea house, and the Shelbourne – as arguably the fanciest hotel in Dublin – categorically would not have welcomed two dozen students crossing its threshold.

When I told my friends I was writing this, a couple of us speculated as to whether the English Literary Society had kept the tradition going. I’ve since done some digging and can confirm that, as of 2013, Publiners is officially no more. This isn’t surprising, though. The event was originally conceived of as nerdy in-joke, and I can’t blame the current crop of students for not wanting to carry it on.

Still, it could be revived. Joyce is, after all, UCD’s most famous alumnus, and the first Bloomsday was organised by a group of similarly bored literati who happened to be friends: John Ryan, Anthony Cronin, Patrick Kavanagh and Brian O’Nolan (better known as Flann O’Brien). Perhaps if we get famous, we can export Publiners in a similar way. Perhaps, this year, we can celebrate Joyce’s birthday in style.