John McAuliffe reviews The Bonniest Companie; Fur; and In a Hare’s Eye 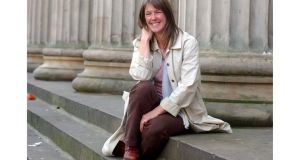 One of the most gifted of an outstanding generation of Scottish poets, Kathleen Jamie initially made her name with quick-witted poems like The Queen of Sheba and Mr and Mrs Scotland are Dead, but more recent collections sounded a different note. Jizzen (1999), The Tree House (2004) and The Overhaul (2012) were less social: their careful lyricism was grounded in a feeling for the transience of an individual human consciousness, which Jamie set, sometimes scarifyingly, against closely-observed portraits of animals, especially birds, and their habitations.

Her new book, The Bonniest Companie (Picador, £9.99), promises to knit together the concerns of her earlier and later work: in it, Jamie resolved to write a poem a week in 2014, “following the cycle of the year”, but also keeping an eye on the independence referendum which would be decided that September.

The Bonniest Companie fulfils that promise in poems that appear almost secretarial in the way they take down what is happening around them but whose clarity resonates beyond any one scene or occasion: World Tree begins with a question: “What kind of tree was yon, stationed / like a beggar at the bottom of our lane / where we braved on scooters and wee bikes?”

Dwelling on the memory, Jamie situates the poem at the edge of the children’s imagination, and as a ghost from an earlier civilisation: “It marked our world’s end, maimed, / relic-grey, down past the last back gate / where the fields began, / growing from before they built the scheme.”

The poem’s ending doesn’t need the context of the Scottish referendum and the fear and anxiety stoked up by Britain’s pro-union parties, but it certainly speaks to it:

I haven’t thought of you in years, your sap

in me, but wonder now what kind you

– elder or hawthorn, bour or may

– and why I suddenly care.

Jamie is aware transcriptions from the natural world can be all too legible and the poems work hard not to avoid simple “lessons” or sermonising.

Although the speaker in Soledades does just give in to the temptation when she finds her copy of a Machado book “tossed beneath the beech hedge and open at a particular page, as though the breeze, riffling through, had spotted his own name among the master’s lines: ‘The deepest words / of the wise man teach us/ the same as the whistle of the wind . . .’”

Mostly, though, it is the clarity of Jamie’s writing that unsettles and catches the reader by surprise, as when she notices the “hot-dust smell” from a Bush wireless in the powerful elegy for her mother, Another You, or ends The Shrew with this image: “when my hour comes, / let me go like the shrew / right here on the path: spindrift on her midget fur, caught mid-thought, mid-dash”.

As the book proceeds past the September referendum, there are more declarations: “Older now, I know nor fee. Nor anvil breaks those chains / And the wild ways we think we walk / Just bring us here again.” (The Tradition).

But when she reconsiders an old book called Scotland’s Splendour: “that hardback nation / which declared itself in our speech / – ours were the grey-rain tones of Clyde-built / trams and cranes (illustrated on p19) / a dream-tinged land we pick up, / then shelve again”, Jamie suggests it is a book whose time is still to come.

In her second collection, Fur (Dedalus €12.50), Grace Wells also frames poems about history and personal relationships with references to the animal world.

Wells problematises the fact that she is using the animal world as a set of images: “I could not read the portents” she writes in Achill; “For so long I had wanted / to read augury, to grow fluent in omen // So what could it portend?” she asks in Animal Encounter.

However, having drawn our attention to portents and the possibility of pathetic fallacy, of reading the animal world as projections of her own feelings, Wells sometimes does just that.

She cites Jung on the wonder of such coincidence and concludes, “the language of this world is amelioration” (Gold Scarab, Rose-Chafer).

Such statements appear unconvincing and lead to rhythmic dead spots at times: Bosnia 2015 imagines the poem as a bag in which images can be stored (a repeated image across the book) and ends, “But their facts are not mine / and in the absence of shared history / there is less and less to say.”

Wells is a fluent writer of scenes, who has important things to say. It is the poems that take in-between spaces as their starting point, poems about islands, airports and beaches, that stick in the memory.

Many of the poems in Breda Wall Ryan’s first collection, In a Hare’s Eye (Doire, €12), lean on existing myths, drawing on Carol Ann Duffy’s World’s Wife poems as an example (and on Brendan Kennelly, Duffy’s acknowledged inspiration, too), retelling stories from unusual points of view, so that Lot’s wife in Salt is a heroine, punished for “standing between [Lot] and his base desire,” while Lir’s second wife, Aoife, is more sinned against than sinning, “her voice in the north wind’s teeth, / when she breathes the blizzard shrieks. / Say swans go swaddled in feathers and down / but Aoife has only her own skin” (The Second Wife’s Tale).

Ryan also draws, in the book’s best poems, on the natural world: Grushie and Tremolo and The Furnock are tough and unillusioned about the landscape they lovingly describe, while her version of a Neruda poem If What is, is Other, strikes other, original notes, searching for images that correspond with experiences:

Perhaps it is the thud of a frozen goldcrest striking the ground?

A pilot whale’s vertebrae on a cottage lawn?

John McAuliffe’s The Way In was published by The Gallery Press last year. He teaches poetry at the University of Manchester’s centre for new writing