Manuscripts, photographs, paintings and personal items among the displays in honour of playwright who died in city 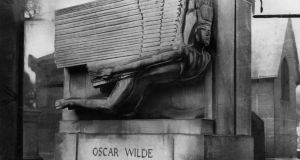 Paris will hold its first major exhibition on the life and work of Oscar Wilde next month, co-curated by his grandson.

Wilde, who spoke fluent French, was an ardent Francophile who regularly visited the city, eventually dying there in 1900, having been hounded out of England after his conviction for homosexuality. His tomb, in Paris’s Père Lachaise cemetery, is now a place of pilgrimage.

Yet the centenary of Wilde’s death – aged just 46 – was not celebrated in France, even though London honoured him with two exhibitions in 2000, at the British Library and the Barbican Centre. The Irish novelist, playwright and poet has only now been given full cultural recognition.

Wilde’s grandson Merlin Holland, who lives in France, said: “There has never been a major Paris exhibition on Oscar. Everybody is now saying, ‘well, why not?’ Oscar is going to be plastered all over the Metro and the buses. I think the French are quite surprised that they never thought of doing this before.”

Manuscripts, photographs, paintings and personal effects are among almost 200 exhibits coming from public and private collections worldwide for the exhibition at the Petit Palais. Together they will tell the story of the creator of masterpieces such as The Importance of Being Earnest and The Picture of Dorian Gray.

The exhibition will feature a manuscript of the former and the published copy of that play dedicated to his loyal friend Robert Ross with the words “the mirror of perfect friendship: Robbie”.

There will also be portraits of Constance, Wilde’s wife and the mother of their two sons, and his lover, Lord Alfred “Bosie” Douglas, whose father’s outrage over their affair led to Wilde’s conviction for gross indecency.

An imposing portrait of Wilde – dated to about 1883 – by the American painter Harper Pennington is among the first-ever loans from the William Andrews Clark Memorial Library, UCLA, Los Angeles, which boasts one of the world’s greatest Wilde collections.

Among personal effects is an envelope with a lock of hair from Wilde’s adored younger sister Isola, who died in childhood. Holland, who is lending it, said: “Oscar decorated it himself, aged 13. It finished up in my father’s possession. It must have been with Oscar until his death.”

Wilde was devastated by Isola’s death, later dedicating his poem Requeiscat to her. It includes the lines: “All her bright golden hair/ Tarnished with rust/ She that was young and fair/ Fallen to dust.”

A further coup is a loan from the Palazzo Rosso in Genoa, Italy, of Guido Reni’s San Sebastiano, the Roman soldier martyred for his Christian faith and depicted by the Italian master around 1615 as a beautiful young man whose body is pierced by arrows. It was on a visit to Genoa that Wilde saw the painting, writing of “a lovely brown boy, with crisp clustering hair and red lips, bound by his evil enemies to a tree, and, though pierced by arrows, raising his eyes with divine, impassioned gaze towards the Eternal Beauty of the opening heavens”.

Holland said that its significance lies in that “Sebastian” became part of Wilde’s assumed name in exile – Sebastian Melmoth: “He undoubtedly saw himself by then as the martyred Saint. It will be the first time that this picture – many times copied – has been shown in an exhibition on Wilde.”