Lismore library gives an insight into another world 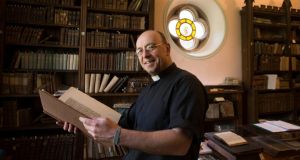 A somewhat forgotten library, whose collection dates back centuries, will open its doors for free guided tours during the 11th Immrama Festival of Travel Writing in Lismore, Co Waterford. The Cotton Library, which is housed at St Carthage’s Cathedral, started as the private collection of Henry Cotton, who was the sub-librarian at the Bodleian Library in Oxford, before becoming the dean of Lismore in 1834.

Cotton was a well-known author, best remembered for his history of the Irish church entitled Fasti Ecclesiae Hibernicae.

Relying on the contributions of friends, Cotton filled the library with books mainly of an ecclesiastical nature, but also included some rare and historical gems as well as bundles of letters and documents related to the cathedral.

The collection is generally closed to the public, but the Very Rev Paul Draper, the current dean of Lismore, has decided to open the library at certain times in the coming month, and there are plans afoot to make it more accessible in the future.

The cathedral is thought to date from 635 when Mochuda, who later took the name Cartagh or Carthage, founded a church on the site. While nothing remains of this early church, stones found in the west wall date from the ninth century, and some fragments of the 12th century Romanesque cathedral also survive.

The library is behind a side door and down a small corridor off the north transept. It has been there since the middle of the 19th century, and was founded for the benefit of clergy who could come to reflect and consult the religious tomes stacked on ornate shelving.

One of the windows bears the coat of arms of the dukes of Devonshire, who inherited Lismore Castle, as well as their motto “Cavendo Tutus” (“Safety through caution”).

The hope now is that with funding, the library may be opened to the public more regularly and proper facilities put in place for those wishing to consult and research the collection. The room itself is compact, and Draper and his wife have been cataloguing the collection since coming to Lismore in 2009.

Some of the rarest books in the collection include those on scripture that were owned by Robert Boyle, who was born in Lismore Castle in 1627, and is one of the founders of modern chemistry.

Other important books in the collection include a Latin Bible from 1542, and a beautifully designed copy of the Koran from 1734.

There are also boxes of 19th-century literary newsletters bound neatly with frayed brown silk. The collection also contains some prints and photographs related to Lismore.

In the middle of the floor is a large chest containing records related to the cathedral, showing what construction works were done, and how they were funded. At the bottom of the chest are stacks of neatly-tied letters from benefactors or those associated with the library.

“During the ninth century, this was an important place of pilgrimage,” Draper explains, while browsing through some folios. “There were some 27 churches attached to here at one stage, as well as a thriving university monastery. Now, we are a small rural congregation, but the hope is that we can open up this wonderful collection on a more permanent basis.”

The dean and his family live next door to the cathedral in a beautiful old building, and Cotton’s headstone is almost visible from one of the large windows.

Many locals have helped in the ongoing restoration of the library and some are happy to act as ad-hoc tour guides on the rare occasions the public have been given access to the collection.

Local historian Dermot Edwards, who is a descendant of Col Curry, the duke of Devonshire’s agent during the early 19th century, remembers first seeing the library in the late 1980s.

“The library had been neglected horribly,” he says. “In fact, while one corner was well-furnished, someone had erected steel shelving in the other corner. I remember seeing mildewed books lying everywhere on the floor. Money was raised to clean it up and a local cabinetmaker put in new shelving, which matched the original. That really was the starting point in bringing it back to its original condition.”

Edwards says that while the library is perhaps not the oldest in Ireland, it is one of the most historically interesting. “It is a significant collection,” he says. “The Bolton Library at Cashel, which dates from the 15th century, is probably more important, but the fact that we can trace this collection back to Henry Cotton, and the connection also with Richard Boyle, makes this library unique.”

The Cotton Library at St Carthage’s Cathedral is open June 14th to 16th, from 2pm to 4pm. Admission is free. For full details on Immrama travel writing festival, see lismoreimmrama.com