Book Review: Timely novel about a sudden, cataclysmic event that shocks the world 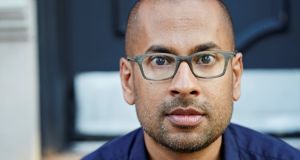 American author Rumaan Alam: ‘Creates an atmosphere of dread so convincing and prescient that it stays with the reader long after reading’

Book Title:
Leave the World Behind

“If the noise returned, say tonight, once the sun had set – once the profound dark of the farmland all around them asserted itself – he wouldn’t survive it. You couldn’t. That was the nature of the noise; it was horror, in some distilled way, in a single, very brief moment.”

In his third novel, the American author Rumaan Alam creates an atmosphere of dread so convincing and prescient that it stays with the reader long after reading. This beautifully paced story about a sudden and catastrophic unknown event lures the reader into a tale of sun, sea and holidaymaking before ripping the beach towel from under us to leave us shivering on the shore alone.

Leave the World Behind covers a multitude in a short space of time. Set over a few days of a family’s holiday on Long Island, it explores issues of race, class and identity in the face of overwhelming disaster. An emotionally resonant read, it taps into our age of anxiety and confirms the worst. If this novel can be categorised as science fiction, it is in the most literal sense: Alam has made up a story that has its basis in science and reality. You feel as if the terrible things in this book could happen tomorrow.

The plot sees an all-American family – white, middle class, two children, a boy and a girl – rent an Airbnb in a remote part of Long Island, “at least an hour from East Hampton”, the closest we get to co-ordinates. The initial 24 hours show the family switching from real life to holiday mode: mother Amanda tries to stop looking at her work emails, she buys fancy foods at the local deli, gets drunk, has loud sex with her husband. Dad Clay gets the barbecue going, while the teenagers, Archie and Rose, use the pool, grumble about boredom and get stuck into the ice-cream.

The irony of the title soon kicks in when the owners of the holiday home, a wealthy black couple in their 60s, turn up unannounced in the night seeking shelter after a blackout in the city spooked them enough to get out of town. After a few vague text alerts about emergencies and blackouts, phone and internet signals fail and the two families are digitally (and later, literally) marooned, with no-one to turn to but each other.

Alam’s pacing of events is exemplary. The novel is full of small incidents – Clay gets lost without GPS, a mass gathering of deer, a child vomits – that cumulatively result in crisis. The author ramps up the horror in later parts of the novel, though to say too much about this would spoil the effect.

As with Diane Cook’s recent Booker-shortlisted The New Wilderness, Alam creates an eerily believable world of apocalypse now. Leave the World Behind was longlisted for the 2020 National Book Awards for Fiction and has been optioned for a Netflix film starring Julia Roberts and Denzel Washington.

Even with the cataclysmic events, the writing has a darkly comic undertone that recalls Jenny Offill and, particularly, Taffy Brodesser-Akner. Alam’s depiction of a New York family and its milieu echoes the latter’s Fleishman Is in Trouble, and his insights into character motivation ring true no matter which voice his omniscient narrator taps into. Here’s Amanda on her latent sexual desire, awakened by being on holiday:

The subject of race is also deftly examined. When George and Ruth turn up late at night, Amanda and Clay are initially sceptical. “What if he’s the handyman?” Amanda says. “What if she’s the maid?” Meanwhile, Ruth, a prim, intelligent woman in her 60s, sneaks into the master bedroom and winces “at the unmade bed, the spent washcloths on the bathroom floor, the scattered dirty laundry” that the guests have left in their wake.

Not everything works. The omniscient voice is too busy in early chapters, with Alam needing to show more restraint in explaining, especially when it comes to dialogue. There is the sense that he doesn’t trust his reader. But this peters out over time as the magnificent mood of dread takes hold.

An undeniably skilled writer, Alam leaves us with an indelible image of what it feels like to truly leave the world as we know it behind:

“Understanding came after the fact. That was how life worked: I’m being hit by a car, I’m having a heart attack, that purple-gray thing emerging from between my legs is the head of our child. Epiphanies. They were the end of a chain of events invisible until that epiphany had been reached.”