Karen Perry: two writers for the price of one 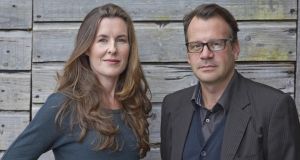 Karen Gillece and Paul Perry: ‘We take a character each and we alternate chapters. So it’s a kind of relay-write’

There’s a new kid on the summer reading block. Actually, make that two new kids. In the book world Karen Perry is the author of last year’s debut novel The Boy That Never Was. In real life she is two people: Paul Perry, poet and winner of a recent Patrick Kavanagh award, and Karen Gillece, novelist and short story writer. With a new Karen Perry book about to hit the shelves, they explain how they got started as a team.

Gillece: “Well, we’re really old friends. We were meeting for a pint in Neary’s one night – and out of the blue Paul suggested it. Half as a joke, half as a writing experiment.”

Perry: “It’s now five years later and we’re on the third book. Little did I know that off-the-cuff suggestion – part of the banter of the evening – would lead to such a fruitful and creative phase of our lives.”

Gillece: “It’s all about timing as well. I was working on a historical novel about the Crimean War. I was spending my days in the National Library reading about cholera – and when Paul suggested this I thought it might be a laugh. A bit of light relief.”

Karen Perry’s debut, The Boy That Never Was, turned the disappearance of a child into a tense psychological drama. The new book, Only We Know, explores what happens when a child does something really bad; how the guilt impacts on friends and family members as they try to get on with their lives. How do Perry and Gillece go about writing as a team?

Perry: “The mechanics of it are fairly simple. We take a character each – in this book, I took Nick – and we alternate chapters. So it’s a kind of relay-write.”

Gillece: “If Paul sends me a chapter that’s really good, I feel I have to up my game. That’s why our novels are quite twisty. It’s unpredictable. You don’t know what the other person is going to send you back. In the first book, Paul sent a chapter with a gun in it. I thought: ‘What???’ I’d never had a book with a gun in it. We’d never talked about that. But that’s part of the fun.”

Perry: “It’s actually quite a fluid process from the get-go. We’re constantly making suggestions to each other as we’re writing. At first it went against my expectations of what writing fiction was – you finish a chapter, you move on to the second – but in fact the whole process is in flux until it ends up on the bookshelf.”

Gillece: “It’s about trust, too. When I wrote novels on my own, I would never have shown a first draft to anyone – not my editor, not my agent. With us it’s so raw, it’s straight off the page. That was a big hurdle for me to get over. But you learn ways of giving criticism or advice – and taking it, as well. We decided early on that you had to park your ego at the door.”

After writing two or three drafts of the book Perry and Gillece swap over and rewrite each other’s chapters, so there’s more uniformity of style for the reader. With a New and Selected Poems published last year Perry says he’s happy to take a bit of time to concentrate on fiction, while waiting to see where his poetry might go next. Gillece plans to dust off her historical novel and get it back on track.

But what’s next for Karen Perry – and do they ever worry that, in time, their individual writing identities might be subsumed by a giant rampaging inflatable Karen Perry figure?

Perry: “I think it would be very claustrophobic. We meet regularly and we talk regularly by phone, by email and in person – but we then get to go home.

“The books are very claustrophobic anyway. We write chapter by chapter, scene by scene – and those scenes can take over your week. I mean, Nick, with his music and his tinnitus. I thought; ‘Bloody hell. I’ll have tinnitus by the end of the novel’.”

Gillece: “Yes, it’s healthy to come home. My husband’s a meteorologist, so I go home and talk about the weather.”

Perry: “It’ll be out next year. But if we start talking about Karen Perry as an individual, watch out. I mean, if we start saying stuff like ‘She has been drinking a lot. I’m worried about her. We need to talk about Karen . . .’ ”