John Banville on Samuel Beckett: a man of many letters

Review: In this third volume of Samuel Beckett’s letters, the bulk of which are to his lover, we get glimpses of the writer’s mordant humour 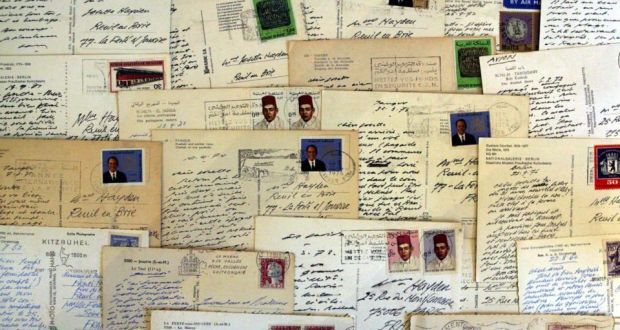 It’s a rum business, reading other people’s letters. If one were visiting someone’s home and spotted a letter from a famous person lying open on the hall table, one would not dream of sneaking even a peek at it, or if one did one would feel distinctly shamefaced for doing it. Yet here, as in the previous two volumes of the projected four-volume edition, the correspondence of Samuel Beckett, one of the most private of the great writers of our or any other time, is thrown open to all.

Beckett himself was clear on the matter. Writing in January 1958 to his American publisher Barney Rosset, he declared, “I dislike the ventilation of private documents. These throw no light on my work,” and the next day, to the theatre director and long-time Beckett collaborator Alan Schneider, “I do not like publication of letters.”

Before he died, however, he bowed to the wishes of publishers, academics, family and friends and agreed that his correspondence should be made public.

In fact The Letters of Samuel Beckett is something of a misnomer. In granting permission for the correspondence to be published, Beckett stipulated that only those letters bearing on his work should be selected. This presented a problem for his literary executor, Edward Beckett, and his quartet of editors. Surely there is nothing in a writer’s life or letters that does not have a bearing on his work, as life and work inextricably commingle.

This problem was more acute in the first two volumes. In the period of his life that they covered, from 1929 to 1956, Beckett was virtually unknown to the public, and the majority of his letters were, inevitably, personal. However, the thing was managed, and those first two volumes are substantial indeed, and seem destined to be the most interesting of the projected four.

Volume III, it must be admitted, has its longueurs, at least for the general reader. Scholars, students, theatre people will no doubt be fascinated by long lists of directions, suggestions and, frequently, complaints about this or that production of the plays.

These were the years of Beckett’s triumph and burgeoning worldwide fame as a dramatist, and he was kept busy fielding inquiries from producers, directors and actors, and even more busy trying to control, down to the last, tiniest detail, the manner in which the plays would be staged. This well-nigh obsessive quest for perfection, as he saw it, is admirable, but it serves to remind us of the fact that Beckett came late to the theatre, that he regarded fiction as his real work – he described the plays as footnotes to the novels – and that in the theatre he yearned for the novelist’s absolute authority over his material and tone of voice.

Nothing in the remaining correspondence will match, for the passion of the writing and the candour of the artistic soul-baring, the series of long letters – they are in volume II – that Beckett wrote to his friend Georges Duthuit, the French critic, in the years when he was suffering through what he called “the siege in the room”, which resulted in the trilogy, so-called – not by Beckett – comprised of the novels Molloy, Malone Dies and The Unnamable, which, taken together, are probably Beckett’s greatest achievement; certainly the author himself thought so. The letters to Duthuit were written at white heat and in a tone of mounting desperation that at times makes them almost indistinguishable from the novels in the trilogy.

Now, in volume III, after the tremendous burst of creativity that produced the trilogy, and with his literary reputation established, Beckett is calmer, more reflective and, indeed, more worldly. We still have the Job-like moanings and groanings, about the difficulties of writing, about the seeming impossibility of “going on”, about his awkwardness in dealing with people – “having never grasped the nature of human conversation” – yet overall the tone is lighter. It is the tone of a man who, having toiled so long in darkness, has been brought up at last into the light, into, indeed, the spotlight, wincing and blinking but glad, despite all, to find himself so unexpectedly illuminated.

There are, needless to say, fascinating moments here. Irish readers will, especially in these times, be interested to read how in 1958 the egregious Archbishop John Charles McQuaid refused to offer votive Mass at the opening of Dublin Theatre Festival because he disapproved of a play by Sean O’Casey and an adaptation of James Joyce’s Ulysses that were due to be staged in the festival. Beckett was furious, and wrote to Barney Rosset, “The Roman Catholic bastards in Ireland yelped Joyce and O’Casey out of their ‘Festival’, so I withdrew my mimes and the reading of All That Fall to be given at the Pike [theatre].”

The following year he wrote to his agent: “I do not wish my plays to be performed in Eire whether by amateurs or by professionals.” Beckett’s short stories and novels had been banned by the Censorship Board, and in the summer of 1960 a half-dozen copies of the trilogy were seized from Hanna’s bookshop by the Garda. Beckett’s friend Robert Pinget recorded, “We talk about the duplicity of the Irish, all niceness outside and enemies within. Sam takes all this very badly.”

Perhaps the most fascinating letter in this volume, from a literary point of view, is the one he wrote to Matti Megged, an Israeli novelist, in 1960. It is one of the clearest statements Beckett ever made of what might be called his negative aesthetic. Megged had been having trouble finding a way of depicting lived life in his work. In response Beckett invoked Proust’s “campaign against naturalism and the distinction he makes between the ‘real’ of the human predicament and the artist’s ‘ideal real’.”

The material of experience, Beckett insists, “is not the material of expression . . . Life in failure can hardly be anything but dismal at the best, whereas there is nothing more exciting for the writer, or richer in unexploited expressive possibilities, than the failure to express. It was some realization of all this and what it involves that enabled me to go on (about 15 years ago) in a situation probably very different from yours, but certainly no less critical.”

Beckett himself was the recipient of a not altogether welcome reaction to his work when he gave the manuscript of the novel How It Is to Robert Pinget, whose opinion he respected. Pinget, himself an experimentalist writer, was overwhelmed by the difficulty of the unpunctuated, relentless text, which provoked in him, he wrote afterwards, “fury and pique”. He went on, “I remind him that he himself, when he was working on it, had told me that it would be unreadable. He takes me up on this, saying I said unpalatable. There’s a world of difference! He offers me a whisky, then another.”

Despite this spirited and, dare one say, characteristically Irish gesture, Beckett was himself piqued and furious. His wife, Suzanne, told Pinget the next day of “Sam’s reaction to my verdict. In his fury and disappointment said I had the judgment of a concierge.”

What Pinget had forgotten was that, when a writer gives you his just-completed work to read, what he wants is not the truth but only praise, and more praise.

The bulk of the letters in this volume are addressed to Barbara Bray, the English radio producer and translator with whom Beckett had a long, intermittent love affair. Reading between the lines, we glimpse a woman who is loving, kindly, highly intelligent and, perhaps most importantly, a sympathetic and perceptive reader of even the most difficult of Beckett’s works.

We feel for her, therefore, when we encounter Beckett’s hackneyed responses to what must have been a lover’s entreaties. Here is an example: “There’s nothing to be done for me, except to try and see me as I am, and be patient with the result. You speak of the happiness one gives and gets. The situation I see is one where no matter what I do pain will ensue somewhere for someone.”

Elsewhere, in writing to his lover he does manage to sound a true note of Beckettian anguish: “But [you] can’t wish happiness on me, I’m not fitted for it.”

If there are flat patches in these letters, they are greatly outnumbered by flashes of Beckett’s mordant and frequently self-mocking humour. To one of his correspondents, who was angry with him, he writes: “It would be a pity if you were not to forgive me who for once am as innocent as the sperm unspent.”

One savours his delight, and regret, when he is reminded of the name Naughton: “wonderful name for a character, why did I never think of it”. A few of the letters to Barbara Bray are written when he is drunk, and while not much veritas flows out of the vino, the result is a fascinating portrait of anarchic self-release, and releasing of the self was a thing Samuel Beckett did not often do.

The third volume is as impeccably and as lovingly edited as its predecessors. Indeed, the scholarly apparatus surrounding the main text is one of the pleasures of this tremendous publishing venture, on which Cambridge University Press is to be congratulated – in the Age of Screens will the university presses turn out to be the saviours of worthwhile literature?

As always, George Craig’s translation of the letters in French is clear, elegant and always inventive – particularly felicitous, for instance, is his rendering of the French slang term mézigue as “My Nibs”. Beckett would have loved it.