With more than 400 Irish saints, Ireland was fertile land for ascetics, hermits and pioneers 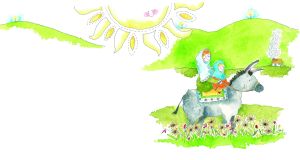 St Íde was a trailblazer. Leaving home at 16 on a donkey, she set up a monastic school at Killeedy (Cell Íde) and became the foster mother of the saints of Ireland and a mentor to St Brendan. Image: Margaret Anne Suggs

Hagiography is fascinating, especially Irish hagiography, in particular the lives of early Irish saints. This ancient literary genre was an important way of recording the extraordinary lives of saints and the miracles and incredible feats attributed to them.

With mystics, healers, holy people and Christians, Ireland was considered a ‘breeding ground’ for saints. With more than 400 Irish saints, Ireland was indeed fertile land for ascetics, hermits and pioneers. Before Christianity came to Ireland, a number of pagan saints were celebrated throughout the country. Sacred sites, including Eagle Mountain, now Croagh Patrick, and places of pilgrimages were established before Patrick was kidnapped by Niall of the Nine Hostages and brought to Ireland. With the arrival of this new belief system, pagan traditions and Celtic spirituality merged with Christianity.

St Patrick is often credited with bringing Christianity to Ireland, but there were a number of pre-Patrician Irish saints before his time, including Ailbhe, Ciarán, Iban and Declan. Pope Conon sent Palladius to Ireland in 431 CE, a year before Patrick chose to return to Ireland as a missionary. Palladius was not as successful in his mission, so Patrick became one of Ireland’s three patron saints, including Brigid and Colmcille.

During the research for Holy Shocking Saints: the Extraordinary Lives of Twelve Irish Saints, one of the main things that stood out was how instrumental Irish women were in early Irish Christianity. It was important to ensure that there was a gender balance in the book as well as highlighting these women’s immense contribution to the Irish monastic movement.

Brigid of Kildare is fascinating: counted as one of 20 pagan saints worshipped in Ireland before the arrival of Christianity, a Celtic Goddess and one of Ireland’s patron saints. The Celtic Goddesses Brigid, Bline and Danu were strong forces in Celtic spirituality and all feature in the book. Brigid was a Celtic Fire Goddess. Brigid’s crosses are a common feature in Irish homes – said to protect against fire, ward off evil and bring luck.

Saints Íde, Moninne and Gobnait refused to conform to society’s expectations of them, including declining marriage proposals, some from highly eligible poets. Their decisions and actions had a profound impact on Irish spirituality.

Íde was a trailblazer. Leaving home at 16 on a donkey, bringing her younger sister Fíona with her, she set up a monastic school at Killeedy (Cell Íde) and later became the foster mother of the saints of Ireland. She was a mentor to St Brendan.

A family feud set Gobnait on her spiritual journey, which led her first to study with St Enda. (She was his only female student.) One story tells of how St Gobnait stopped the spread of plague by using honey as a cure; another states that she used her stave to draw a white line that prevented the plague entering her parish.

Moninne was a powerful force and was instrumental in the development of the great monastic movement, founding churches in Ireland and Scotland. These saints were similar in their determination to help and enrich the lives of others, whether through healing or sharing their faith. Would their actions and powers of healing have been interpreted in the same way in a different time or place, for example, Salem, Massachusetts or Mistley, Essex? Thankfully, none of these inspirational women were burned at the stake or thrown into water to see if they would sink or float. Instead, their miracles and deeds were recognised and they were venerated as saints.

There are many stories and tales about the saints’ bold and brave deeds, including Lí Ban transforming into a mermaid, Colmcille confronting the Loch Ness Monster, Gobnait setting a swarm of bees on raiders and Ciarán’s spirit returning to smote raiders with his crozier!

It was interesting to read about Ireland during the sixth and seventh century, and to learn that Irish people battled with different plagues and epidemics back then. St Ciarán died of yellow fever aged 33. He left a lasting legacy in a such a short space of time. Established in 609 CE, All Saints Day (All Hallows’ Day) was originally celebrated on May 13th. During his reign, Pope Gregory III (731-741 CE) moved the date to November 1st. By that time, Ireland was already known as the Land of Saints and Scholars after Ciarán founded Clonmacnoise in 546 CE.

Ireland’s rich history of celebrating its spirituality and the incredible lives of Irish saints is evident from holy wells dotted around the country to imposing cathedrals built in their name. Their remarkable deeds can be seen in illuminated manuscripts and magnificent stained-glass windows, especially Harry Clarke’s in St Honan’s Chapel and Micheal Healy’s on display in the National Gallery.

Covering the country and travelling abroad, Irish saints become known world-wide from Brendan setting sail across the Atlantic, Dymphna fleeing for her life to Belgium, Kilian being sent on a mission to convert the Barbarians and Colmcille becoming the Father of Christianity in Scotland.

Patrick’s influence ignited the golden age of Irish saints and their works across Europe, but each of these 12 saints led extraordinary lives that created a lasting legacy. Determined and fearless, most of them had to conduct, endure or witness shocking deeds. Their acts of kindness, incredible achievements and miracles that occurred before and after their deaths eventually made them saints.

Their dramatic and shocking tales are told through words and pictures. Thanks to Margaret Anne Suggs, Holy Shocking Saints is beautifully illustrated. Her striking colourful illustrations capture the magic and mystery of these saints’ stories perfectly as well as celebrating their incredible lives.