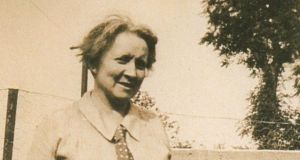 In 2013 Anu Productions, Ireland’s most innovative site-specific theatre company, devised a series of 13 pieces (unsurprisingly called Thirteen) to reflect on aspects of the 1913 Lockout. One of them had the small audience gather in the lane beside the Abbey Theatre. A woman rushed out of a side door, pursued by a furious man.

The former was the actor Helena Molony, played by the wonderful Derbhle Crotty; her pursuer was St John Ervine, the Abbey’s general manager. She was leaving the theatre between the matinee and the evening show to help with the soup kitchen set up at Liberty Hall to feed the locked-out workers and their families.

After a spirited altercation with Ervine she ushered us into the basement of Liberty Hall, where we passed through the soup kitchen to a small room. She offered us all a nip from a baby Power. I took one. She then reflected on the misery of the Lockout and gave a graphic description of the death, from lockjaw, of 16-year-old Alice Brady, shot on the Dublin quays while trying to buy bread.

This short but riveting performance gave us a lot of information about a deeply interesting woman who was involved in all sorts of things during her long life. Molony was an actor, a political activist, a magazine editor, a combatant in the 1916 Rising, a major trade unionist, a gifted orator, a serious drinker and, possibly, a lesbian. She also approved of Soviet Russia and assisted a Nazi spy who came to Ireland during the Second World War to make common cause with the IRA.

The decade of centenaries has brought a welcome focus on women involved in feminism, nationalism, militarism, pacifism and socialism during the period

This first biography of Molony fleshes out our knowledge of this complicated woman and joins a number of other biographies of women activists during these years whose lives are being excavated by a new generation of historians of Irish women, building on the pioneering work of Margaret Ward’s Unmanageable Revolutionaries and Mary Jones’s These Obstreperous Lassies, published in 1983 and 1988. The decade of centenaries has brought a welcome focus on women involved in feminism, nationalism, militarism, pacifism and socialism during the period.

Helena Molony was born in 1883 in Dublin, the daughter of a grocer. She was orphaned early in life, and little evidence remains of her childhood. She remained close to her brother Frank, who emigrated to the United States with his wife in 1910. She built a network of close friends throughout her life, including Maud Gonne MacBride and her daughter Iseult Stuart, Sidney Gifford Czira, Constance Markievicz and Kathleen Lynn. She spent the last 20 years of her life living with Eveleen O’Brien, a doctor at Grangegorman psychiatric hospital.

Her activism began with Maud Gonne’s Inghinidhe na hÉireann, which she joined after hearing Gonne speak. In 1908 she established Bean na hÉireann as a monthly “woman’s paper advocating militancy, separatism and feminism”. Molony described it as “a funny hotch-potch of blood and thunder, high thinking, and home-made bread”. She favoured nationalism over the feminist campaign for women’s suffrage, believing British legislation was an unworthy objective for Irish separatists.

Molony’s acting gifts were very useful to her as a political speaker; she spent a lot of time making incendiary speeches on the issues that concerned her

During this time she was a well-known and critically acclaimed actor on the Abbey stage when the company was at one of its high points. Her acting gifts were useful to her as a political speaker; she spent a lot of time on the back of horse-drawn trailers in Foster Place, making often incendiary speeches on the issues that concerned her.

She was increasingly drawn to James Connolly’s brand of socialism, and was intensely involved in alleviating the worst effects of the 1913 Lockout. In 1914 she succeeded Delia Larkin as general secretary of the Irish Women Workers’ Union, and she remained part of that organisation, and committed to its objectives, for the rest of her working life. She was a highly respected if sometimes controversial trade unionist.

Molony was active in the Irish Citizen Army in the 1916 Rising. She witnessed Seán Connolly, her fellow Abbey actor, shoot dead Constable James O’Brien outside Dublin Castle on Easter Monday, and watched him die later from a sniper’s shot. She was imprisoned for a lengthy period after the Rising. Connolly’s death was a great blow to her; she had lost a friend and political mentor.

Molony took the anti-Treaty side in the Civil War, and when it was over she spent many years opposing the gradual erosion of women’s rights in the new conservative State, so much at odds with the Proclamation of the Irish Republic, which she cherished.

Her drinking, arising from lifelong bouts of depression, caused her much anguish. Her later years with Eveleen O’Brien gave her peace and solace as she began to be feted as one of the great survivors of the Rising, albeit with large bits of her legacy suppressed. She died in 1967.

The most familiar photograph of Molony is one from the 1930s, where she looks grim and unhappy, with hair like a fright wig. Regan has unearthed an earlier picture, taken of the cast of The Devil’s Disciple in 1913, where Molony is standing just behind a very made-up Constance Markievicz, with her friend Sidney Gifford in profile beside her, looking at her with obvious affection.

In this photograph, Molony is a young, vibrant, pretty woman, smiling at the camera and the future. It’s a poignant reminder of the distance between youthful, hopeful activism and later disillusion.