Girl in Pieces review: writing that makes the cut

Intimate, gritty novel offers a realistic account of self-harm – and a glimmer of hope 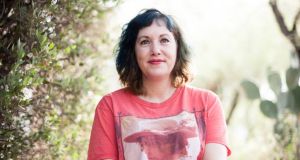 Kathleen Glasgow: her aim was to write an uplifting personal story that would inspire hope in anyone affected by self-harm and she has achieved it.

It is a truth universally acknowledged that since the publication of Gillian Flynn’s bestselling Gone Girl in 2012, books with “girl” in the title do well commercially. Four years and numerous novels later, a backlash is due, but hopefully not before readers get to Kathleen Glasgow’s searing semiautobiographical debut, Girl in Pieces. For if any book deserves to use the word, it is this examination of a damaged young female who has experienced more trauma than most women will ever go through in their lives.

“Once my mother hit my ear so hard I heard the howling of trains for a week,” says 17-year-old Charlie Davies, in one of the book’s many crystal clear descriptions of abuse. When we meet Charlie she is resident in Creeley, a treatment centre in Minnesota for teenage girls who self-harm.

The circumstances that have led her to this point include: a depressive and beloved father who killed himself; an abusive mother who took his death out on her only child; a best friend who also attempts suicide; and the severing of ties between mother and daughter followed by a stint of homelessness that culminates with Charlie living in “Seed House”, where she’s pimped out to older men. Her drug addict friends Evan and Dump encourage her to comply.

These “friends” find Charlie unconscious and bleeding out in the attic one evening after she has cut herself too severely. They roll her up in a carpet to stem the bleeding and deliver her to hospital, and subsequently to Creeley, where the kindly Dr Casper attempts group therapy sessions with a host of ravaged young women.

These characters are divided into cutters and burners, and, in a manner reminiscent of the collective narrative of Susanna Kaysan’s bestselling memoir Girl, Interrupted, they are portrayed with sympathy and honesty. An autobiographical note at the end highlights the book’s central message: self-harm is not attention seeking; it is a mechanism for coping with overwhelming emotional torment .

Girl in Pieces is intimate and gritty, a crossover novel steeped in misery but with the momentum of recovery to keep the reader engaged throughout. Damaged as she is, Charlie is an astute voice. Her cutting is a way to diminish her painful existence: “I had to cut the black heat out . . . cut it all out, get smaller and smaller until I was nothing.” Glasgow’s style is evocative and personal, yet still achieves distance: “I remember the stars that night. They were like salt against the sky, like someone spilled the shaker against very dark cloth. That mattered to me, their accidental beauty.”

After her insurance runs out, Charlie must leave Creeley. An invitation from her friend Mikey, an unrequited love, sees her head to Tucson, Arizona to start the process of gluing herself back together. Their friendship is nicely ambiguous, with Mikey wanting to help Charlie but simultaneously refusing to put his own life on hold. Instead Charlie finds board in a half-way house – a noisy and cramped space, but a room of her own nonetheless – and gets a job as a dishwasher in a grungy coffee house.

As the Texan writer Merritt Tierce’s debut, Love Me Back, memorably showed earlier this year, the service industry can be a haven for messed-up individuals, addicts and those attempting recovery. Though Glasgow’s writing does not rival the excellent Tierce, she depicts a similar terrain, with characters such as Chef Linus and the down-and-out musician Riley West bringing their own problems to the table. As Charlie admirably presses down the road of recovery – likened to waking from a dark place – her toxic relationship with Riley casts a shadow over her chances of success.

There are perhaps too many troubled characters in this book. From her father to her best friend, Ellis, from Ariel the artist to Linus, Charlie only meets people who’ve had tragedy in their lives. Understandably, the girls she befriends at the treatment centre, such as the complex and vivid Blue, are on this list. But the later sections about Ellis feel repetitive and readers may grow tired of this storyline, which ultimately goes nowhere. There are also one too many artist-as-mentor figures but the underlying theme of creativity as a restorative power is interesting and is skilfully explored by Glasgow.

Living in Tucson, Arizona, the author currently writes for Garrison Keillor’s radio show, The Writer’s Almanac. Girl in Pieces was written during arts fellowships over the past eight years. Glasgow says her aim was to write an uplifting personal story that would inspire hope in anyone affected by self-harm. She has without a doubt achieved this. “There is the person people see on the outside and then there is the person on the inside and then, even farther down, is that other, buried person, a naked and silent creature, not used to light.” In her debut novel, Glasgow mines the darkness and, ultimately, offers the glimmer of recovery.