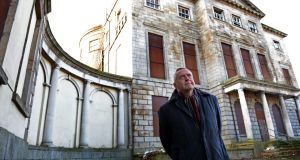 “There is no use pretending that Frank McDonald is aiming at a judicial and dispassionate tone. He is not. He is in a rage,” said Maurice Craig of McDonald’s first book The Destruction of Dublin.

Like all great architects, Craig knew that civic society’s equilibrium depends on honest planning.  Journalist McDonald saw that the city was out of joint and his rage lit a blow torch which exposed the rot that was excoriated at the planning tribunal.

This memoir finds him supping with Sam Stephenson, earlier labelled a “pariah”, and shaking hands with Charlie Haughey, at whose heels he had snapped right up to Haughey’s fall from grace at Dublin Castle. McDonald confessed to PJ Mara that he liked the renovated Government Buildings: “Do you see that man over there,” Mara said, pointing to then taoiseach. “Go over and tell him that the Man from del Monte says, ‘Yes.’”

It was a backhanded compliment to McDonald’s rigour and righteous indignation, recollected here, at last, in tranquillity. And there is also an unexpected vulnerability. Auden’s lines “Private faces in public places/ Are wiser and nicer/ Than public faces in private places” could be a working title for McDonald’s life.

Childhood chapters often get skipped – especially if juicier chapters beckon. To skip here would be, as the late Caroline Walsh remarked on discovering McDonald is gay, a terrible waste. Because McDonald’s account of childhood on Dublin’s northside smashes forever the heart of the rowl monopoly of writers like Peter Sheridan: no longer is the cultural richness of Dublin the preserve of Liberties loyalists.

His parents were hardworking, loving, middle class and with a sense of fun and foresight; they stamped the metropolis on their children’s psyches. “After we got the Ford Anglia, there was no stopping us.”

But it is his memories of a Catholic boyhood that linger. Since Catholicism’s cultural retreat, much ritual exists only in memory. He word-paints a Corpus Christi procession of sacerdotal splendour in Aughrim Street with renaissance luminosity: gold monstrance carried aloft, houses draped in papal purple, yellow and white buntinged streets, wide cornetted French order nuns, green Irish Army representatives, Knights of Malta – in short, pageantry in full fig.

On Holy Week it was the power as much as the pomp which fed his imagination. It was presided over by Archbishop John Charles McQuaid, who was “effective ruler of Catholic Ireland for over 30 years. With his mitre and crozier, Hudson limousine, palatial private home in Killiney and rustling, princely vestments that sometimes required a team of altar boys to carry the train.” Then there’s papal legate Cardinal Agagianian, who arrived for the Patrician Congress in 1961 to a welcome of four Air Corps vampire jets and a 21-gun salute.

McDonald celebrating Mass in the back garden, in colourful crepe-paper vestments, could not last: his life would all too soon collide with the Church’s teachings.

At university the non-conformist McDonald emerged. A key player in the Gentle Revolution, he tells of sit-ins, speeches and gifted students who went on to shine in Irish society. He names them all and they are indeed illustrious, but I found the constant roll-calling a little pointless. Especially when it holds up the narrative of his crusading career.

At an An Bord Pleanála hearing about Treasury Holdings’ proposals for the North Wall Quay he bumped into Frank Dunlop, soon to be a witness at the Flood tribunal, who confides that there was one question which, if put to him, he would have to answer: “Did any politicians ask me for money?”

McDonald made a call, the question was asked and from Dunlop’s answers the truth about planning corruption in Ireland was revealed.

Over his career, McDonald stood up to politicians and planners, editors and architects. On the toughest challenge – standing up to your own tribe – he didn’t flinch. Early in his Irish Times career he exposed its then property editor as a member of a property syndicate. Despite this, the property editor was promoted.

His relationship with Conor Brady was clouded by his suspicion that Brady thought he exaggerated the corruption in the planning process. He describes Brady as a master at office politics. The memoir reveals that he was no slouch at it himself.

He recalls that when the salaries of the editor and the managing director of The Irish Times became public as journalists were taking cuts, he took direct action, organising a petition of 80 colleagues to complain to the Irish Times Trust about this “ unconscionable level of pay”. All the illustrious Irish Times names signed it.

A surprising supporter was Treasury Holdings property developer Richard Barrett, who wrote to McDonald: “ . . . I think mass exodus and start a new paper [giving] the journos a much better salary and free equity . . .” He offered €20 million to €25 million for this and advised securing all important journalists for the “midnight raid that stakes them through the heart”.

A memoir is a very particular literary form. Neither autobiography nor diary, it allows for a certain impressionism. The fleeting light captured here is of coffee house conversation. There’s gossip, a delicious sense of indiscretion and an acutely observed bitchiness – like how conservation warrior FX Martin, an Augustinian mendicant, wore an Italian tailored tunic and carried Visa and Diners Club cards .

All of which might lead to the belief that McDonald is the quintessential boulevardier.

Which would be quite wrong. Yes, McDonald has crafted a very distinctive public face, but he cherishes intimacy too. He is honest and sad about growing old. But there’s consolation. A most moving chapter is his account of how, unlike in straight relationships, older gay men regularly become mentors to young gay men while happily married – as he is. Loves but not lovers.

He admits mistakes – like recommending Poolbeg for the incinerator and a violent altercation with a woman manager of a noisy Temple Bar nightclub.

Anger and altruism; pain and planning – should a rage like McDonald’s ever truly subside?

Anne Harris is a former editor of the Sunday Independent