Whether spoken or written, all fairy tales are journeys in which the hero must eventually confront that greatest of frenemies – their own flawed and oh so human self 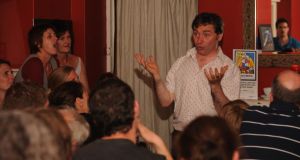 Beyond a blood-red curtain, inside a blood-red room in the Cottage Bar, Galway, men and women from the four corners of the globe gather every Thursday to hear my fairy tales for adults. By the light of two score and more candles I tell them Celtic tales of terror, comedy, sorrow, lust, magic, ghosts, loss and temptation. The full range of life, from birth to death, is played out in my sessions – and not only in the spoken stories.

Over the years, the Celtic Tales sessions have evolved into their own ongoing drama with a history as cluttered and colourful as any soap opera: the young couple who requested really scary stories to distract the woman from her labour contractions; the night the audience had to be kept in the story room while paramedics tended to a drinker in the bar who had suffered a heart attack; a hot, dry evening in summer when an American declared “I’ve been here six days and never seen a drop of rain”, at which a pipe instantly burst and drenched the entire audience who responded with cheers and applause.

I describe the stories I tell and write as adult fairy stories. There is often a magical element in them, as well as strange creatures and sudden reverses of fortune. Some are joyous stories; others dark tales of terror. Yet even the darkest of my stories are coloured with a goodly splash of humour.

Most of my spoken stories are re-imaginings of Scottish and Irish tales – myths, folktales, urban legends – as well as stories from my family. Nearly all involve a journey of discovery, whether to the magical and perilous city beneath the waves of Galway Bay or back in time to a pub, prison and hangman’s noose of 16th-century London. There are journeys through woods, forests, shorelines and rivers, all leading to triumph or horror or sometimes both. Even the winding back roads of Co Galway roll and twist towards strange and terrible revelations. The stories are peopled by villains, murderers, men in black, witches, priests, pagans, warriors, fisher folk, gamblers and schemers, murderers, organic cheese makers and love-struck teenagers.

There are, however, no little, lithesome creatures with fluttering wings, glittering wands and dainty steps. It was not a conscious decision to exclude Tinker Bell and her kin; I simply have never come across such creatures in the stories of Ireland and Scotland. They may exist but I’m not sure where.

Perhaps there is an echo of twee Victorian fairies in the night visitors who haunt the inmates of Oscar Wilde’s Reading Gaol in the hours leading up to the hanging of a prisoner. Certainly Oscar’s sprites are thin and whimsical, and they dance and they sing. But these creatures are as cruel as they are capricious. They touch something older, deeper and darker in the human psyche – the fear of being utterly alone and unprotected against forces infinitely stronger than us. The Ballad of Reading Gaol may not be a fairy story as such, but it is about a journey through fear that leads to revelation: that humanity’s machine is more awful far than mere evil. This is an appalling truth, but just as in a fairy story, by acknowledging the truth we gain the strength to confront it and perhaps defeat it.

Like all good fairy tales, my written stories serve as a mirror to the world we live in and travel through. My novella Transformation begins as a love story but slowly mutates into something darker and creepier as a creature from folk lore intrudes on the lives of the young lovers. This Pooka initiates a reign of terror that forces the narrator to confront deeper truths about love, grief and the beauty of our brief lives. The story plays out against the backdrop of contemporary Galway’s vibrancy, multiculturalism, poverty and divisions. There is terror in the tale, and grief, but also humour.

With Galway Bay Folk Tales, I endeavoured to honour and celebrate not only the stories of the west, but the lives and struggles of the people who created those stories, whether they lived in the Iron Age or the Digital Age. As well as local folk tales, myths and urban legends, I wove in history, archaeology, theories on early settlements in Ireland, philosophy, astro-physics and my own imagination. The result is a fast-paced book filled with magic and adventures covering a period of time from the birth of the universe right up to post-Celtic Tiger Ireland. My hope is that the book will prove the stories of the west are as relevant, inspiring and powerful today as when they were first told.

My recently-finished blog novel, Marcus Marcus and the Hurting Heart, is set on a distant planet in the far future, the story is about a prince who makes a journey in which he must confront magical powers. As well as seeking to be a subtle and often funny critique of political power , it is also woven through with myths and folktales. The end uses a well-known fairy tale plot device but in a new and unexpected way.

Whether spoken or written, all fairy tales are journeys in which the hero must eventually confront that greatest of frenemies – their own flawed and oh so human self. This is the pleasure and thrill of fairy tales. We as readers or an audience have our own fears and terrors and hopes and joys. Through the medium of the fairy tale they are amplified into massive and fearsome shapes. Then with a poof! the story is over and we are left exhausted and exhilarated.

To experience the wonder, terror and joy of fairy stories I would suggest that people take a deep breath, cross their fingers and step through a blood-red curtain into a blood-red room in a pub in Galway city. You never know who or what you might encounter there. You may even end up part of a story yourself.

The Age of Catastrophe review: once upon a hellish time in the West
5