Did the Famous Five come from Cork? 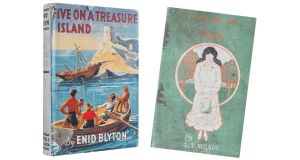 An early edition of Enid Blyton’s 1942 novel Five on a Treasure Island; and LT Meade’s earlier novel Four on an Island 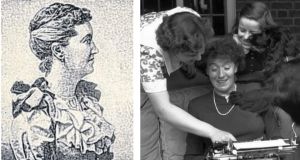 LT Meade; and Enid Blyton with her daughters and their dog. Blyton photograph: George Konig/Keystone Features/Getty

LT Meade’s novel Four on an Island: A Story of Adventure (1892), now quite rare and seldom read, is sitting in front of me on a cushion in Dublin City Library’s Pearse Street archive. After deliberation about its location in the stacks – the catalogue information was incomplete – the librarian had brought it to me on the cushion, and speculated about my need for gloves while handling the fragile volume (she deemed them unnecessary).

Is this the book that influenced Enid Blyton’s Five on a Treasure Island (1942)?

A few days earlier, arriving back in Dublin from Chicago, where I live, I had picked up Blyton’s novel as part of my research for a book, Beasts at Bedtime, about environmental themes in children’s books.

Although Blyton wrote enthusiastically about nature – her early books include The Bird Book (1926), The Animal Book (1927) and Nature Lessons (1929) – my recollection of Five on a Treasure Island was as a sturdy adventure story rather than a bucolic meditation on kids’ survival on a wild island. It’s a romp where four cousins and their dog gallivant about an island off the Dorset coast, searching for “ingots of gold” and drinking lots of ginger beer.

Island stories are intriguing, as children away from parents’ gaze not only get up to high jinks but are often at the mercy of the wilder forces of nature – their own and environmental.

Blyton’s novel has some pleasant observations on the natural history of Kirrin Island: its rocky inaccessibility, the tameness of its rabbits, the fishing skills of cormorants. I suspect my career choice (a scientist of sorts) derives from a captivation with Uncle Quentin, the irascible scientist, father to Georgina and uncle to her cousins Julian, Dick and Anne, in Blyton’s Famous Five books.

The state of Blyton scholarship is appalling, but Five on a Treasure Island has garnered some academic attention because of gender-identity issues. “Tomboy” Georgina, Blyton’s most beloved character, prefers to be called George. As Dick says to Anne: “You know she hates being a girl, and having a girl’s name.” After crying about the sale of Kirrin Island, George, “half-ashamed”, exclaims: “I’ve been behaving like a girl.”

Five on a Treasure Island moves briskly. The cousins and their dog, Timmy, row to the island and witness a wreck being tossed from the bottom of the sea on to rocks during a storm. They investigate and discover that the wreck’s gold cargo is buried on the island. Meanwhile, Uncle Quentin unwittingly sells the island to a ne’er-do-well treasure hunter in search of the ingots. Spoiler alert: the kids find the gold and foil the treasure hunters. The end.

Rarely read
And so, a couple of days after re-reading it, I tracked down Four on an Island in the archive. I unearthed it only because it has the word “island” in the title; the book is difficult to find. Of LT Meade’s 300-odd books, A World of Girls (1886) is one of the few still occasionally read today.

Elizabeth (“Lillie”) Thomasina Meade was born in Bandon, Co Cork, around 1844. Her father was a Church of Ireland rector. She moved to London in 1847 and died in Oxford in 1914. Although the topics of her widely read books were diverse, the more popular ones were about adolescent girls, often set in schools.

The influence of such novels on later writers, such as Blyton and Angela Brazil, is well-established. For example, Meade has a story called A Very Naughty Girl, and Blyton has one called The Naughtiest Girl in the School, but there is minimal plot overlap. Meade might have also indirectly influenced the Harry Potter series.

Meade’s island story concerns English cousins Ferdinand, Isabel, Rachel and Tony. Their dog Mungo makes five in all. After a storm, the children become stranded off the coast of Brazil. Ferdinand and Isabel (“Bell” as she insists on being called) tame the island. Bell declares: “What a good thing that I was always as much boy as girl!” She fights vicious crabs, wields a hatchet and thrives in the wild domain. In adapting to island life, the cousins discover a shipwreck on the rocks and investigate.

The plot elements are so undeniably similar to Blyton’s island story that it seems probable that the older book inspired the newer one. As well as the plots, there is a curious word similarity between the two. Meade’s book refers to a “fishing-smack”, common in her day, and fishing-smacks are mentioned several times in Five on a Treasure Island, although by the time Blyton wrote, that type of vessel was rare.

Crusoe effect
To make the bolder claim that Blyton helped herself to characters and plot elements would be difficult. After all, both novels are descendants of Robinson Crusoe (1719) and share themes with that very first of all novels. Crusoe was also a victim of a storm at sea and starts his island adventure by ransacking the shipwreck.

That being said, Blyton would have known Meade’s work, which was popular when she was a child. Blyton, who was born in 1897, was a voracious reader; at nine she showed off her photographic memory by glancing at a page of a novel and reciting every word to her father.

Until she suffered from dementia, shortly before her death, Blyton prided herself on her memory. Describing her creative process to psychologist Peter McKellar, she wrote: “I think my imagination contains all the things I have ever seen or heard, things my conscious mind has long forgotten – and they have all been jumbled about till a light penetrates into the mass, and a happening here or an object there is taken out, transmuted, or formed into something that takes a natural and rightful place in the story.”

Blyton said that her life experiences “sank down into my ‘under-mind’ and simmered there, waiting for the time to come when they would be needed again for a book – changed, transmuted, made perfect, finely wrought – quite different from when they were packed away”. If Blyton read Four on an Island, she wouldn’t have forgotten it.

It is possibly for the best if LT Meade’s book rests in the library archives; it is not a great novel. Neither is Blyton’s, by literary standards. But when I returned to Chicago, I reread Five on a Treasure Island yet again, enjoying the yarn and bathing in waves of nostalgia.