Crime fiction from hillbilly noir to a cold war potboiler 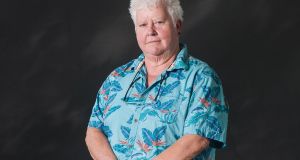 Insidious Intent (Little, Brown, €16.99), the 10th in the series, opens with Kathryn McCormick attending a wedding reception alone, where she meets a man she has never met before but who intends to kill her in three weeks’ time. Still mourning her murdered brother and sister-in-law, whose deaths she believes were her fault, Jordan – now the head of ReMIT, a regional Major Incident Team – finds herself struggling to catch a man who commits apparently motiveless murders, and who also appears to have an expert’s understanding of forensic science.

The killer’s meticulous planning, which the reader is privy to, means that Hill’s intuitive insights are notable for their absence; instead, Insidious Intent is a police procedural which celebrates the professionalism, diligence and dogged refusal to accept defeat that has characterised Jordan’s close-knit team over the previous nine novels. There is a certain inevitability, of course, to the conclusion of any investigation in police procedural fiction, but here McDermid’s portrayal of a surprisingly fragile Carol Jordan as a woman plagued by demons both personal and professional results in a genuinely shocking denouement.

Martin Peters, the eponymous hero of Henry McDonald’s The Swinging Detective (Gibson Square Books, €12.75), is a complex man. Named by his refugee German father after the famous English footballer, Peters is a former British Army intelligence officer currently working as a police detective in Berlin – and that’s before we get to his sexual proclivities, which is where the swinging comes in. A veteran of Berlin’s tangled web of spies and defectors during latter stages of the cold war, the cynical, hard-drinking Peters believes he has seen it all until what appears to be a snuff film announces the media debut of “Christopher”, a serial killer who has taken it upon himself to “do God’s work” by exterminating paedophiles.

Confronted by a killer who possesses the cunning and skills of an ex-GDR special forces soldier, and with public opinion broadly in favour of the killer’s mission, Peters finds himself “hunting down all his history’s cast-offs, swimming in its backwash, searching for the remains of the un-dead armies of his war gone by”. The Ireland correspondent for the Guardian and Observer, McDonald delivers a fever-dream tale rooted in Berlin’s seedy underworld, a morally ambiguous novel of pulsating narrative drive marred by surprisingly slapdash prose.

Stephen Burke’s second novel, The Reluctant Contact (Hodder & Stoughton, €14.99), is set on the Svalbard archipelago in 1977, where a Russian mining community, Pyramiden, occupies Norwegian territory less than 160km from the North Pole. Yuri, a Soviet engineer, lives by “the old gulag-avoidance rules” of trust no one, keep your head down and look after number one. Soon, however, Yuri finds himself investigating the possible murder of his assistant, Semyon, and embroiled in a plot to help his lover, Anya, defect to the West.

The snowbound setting of The Reluctant Contact calls to mind Robert Harris’s Archangel and Lionel Davidson’s Kolymsky Heights, but while Burke is superb at evoking the harshly beautiful environs of Pyramiden, his characters are an unusually garrulous and indiscreet bunch by the standards of cold war spy fiction. Yuri, having outlined the old gulag-avoidance rules, proceeds to break them all with unseemly haste. That said, there’s a charmingly gauche disconnect between the naivety of Yuri’s selfless actions and his perception of himself as an agent of Machiavellian subversion, an incongruity which invests this cold war potboiler with a pathos that renders Yuri a tragically deluded hero, but a hero worth rooting for nonetheless.

Set in Mississippi, Ace Atkins’ seventh Quinn Colson novel, The Fallen (Corsair, €15.99), opens with a trio of ex-US rangers donning Donald Trump masks to rob a bank. As Sheriff Colson sets about investigating, we learn that the gang, led by Rick Wilcox and army veterans of multiple tours in Afghanistan, are motivated less by money than by the thrill of going into action and utilising the skill-set Uncle Sam spent so much time and money developing. As their spree continues, Wilcox and his gang are perceived as modern American heroes emulating the bank-robbing outlaws of the 1920s and 1930s: “People are calling them heroes. Some say the robberies are politically motivated.” Meanwhile, Wilcox and his buddies believe that, while “all cops think they’re heroes”, it’s Wilcox and his law-breaking ilk who are “doing the most good” by “making everyone feel alive”. If that sounds a bit subversive for Mississippi, fear not: Colson is the kind of good-old-boy lawman traditional enough to be admired for having “a John Wayne complex”. With its pop culture-savvy bad guys, Stetson-wearing lawman and laconic style, The Fallen reads like a hillbilly noir homage to Elmore Leonard.

The black dahlia case, writes Piu Eatwell in her Introduction to Black Dahlia, Red Rose (Coronet, €17.99), “became a real-life noir story, acquiring its own mythic dimensions as fact and fiction became hard to disentangle”. She could just as easily be describing her own account of the investigation into the murder of Elizabeth Short in 1947, a meticulously researched work that is delivered with all the punch, pace and suspense of the finest noir thrillers.

Subtitled “America’s most notorious crime solved for the first time”, the book’s cast of characters is as lurid as might be found in any Raymond Chandler novel, as the narrative embraces crusading journalists, sociopathic ex-soldiers, ambitious lawyers and politicians, and a host of shadowy figures from Los Angeles’s criminal underworld. Brilliant at evoking the grimy, amoral excesses of Los Angeles and Hollywood, Eatwell never forgets the tragic figure at the heart of her story, while emphasising the callousness of the post-second World War era in which she was so brutally murdered. “As an aside,” writes Eatwell, “the report revealed an astonishing indifference to the case on the part of higher executives at the LAPD [Los Angeles Police Department]. Elizabeth Short was “just another butchered ----.” Nobody should be excited by her murder.”

The Movie Quiz: What is the completely made-up tagline for ‘Jaws 19’?
4