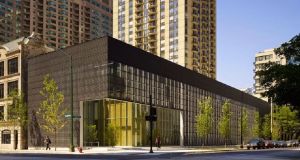 Poetry Foundation: the organisation’s building, which is also home to Poetry magazine, in Chicago

The United States’ prestigious Poetry magazine has doubled down on its decision to publish a poem by a convicted sex offender as part of a special edition dedicated to incarcerated poets, telling critics that “it is not our role to further judge or punish [people] as a result of their criminal convictions”.

The magazine, which has been running since 1912 and is published by the Poetry Foundation, has just released its new issue focusing on work by “currently and formerly incarcerated people”, their families and prison workers. It includes a poem by Kirk Nesset, a former professor of English literature who was released from prison last year after serving time for possessing, receiving and distributing child sexual-abuse images in 2014. The investigation found Nesset in possession of more than 500,000 images and films of child sexual abuse.

When a reader asked why the issue included Nesset, Poetry magazine said that its guest editors “didn’t have knowledge of contributors’ backgrounds”, because “the editorial principle for this issue was to widen access to publication for writers inside prison and to expand access to poetry, bearing in mind biases against and barriers for incarcerated people”.

“We recognise the life-shattering impact of violence and denounce harm,” the magazine said in a statement on Twitter. “People in prison have been sentenced and are serving/have served those sentences; it is not our role to further judge or punish them as a result of their criminal convictions. As editors, our role is to read poems and facilitate conversations around contemporary poetry.

“We maintain that these poems are an expression of a human experience and that poetry is a force to advance human engagement and critical self-reflection. We hope the poetry in this issue facilitates deep and empathic reading and extends our discourse.”

We appreciate you taking the time to share your concerns. We recognize the life-shattering impact of violence & denounce harm. 1/4

I'm going to be honest about my life. I barely escaped being a survivor myself. I've counseled many friends, family members & former students who are survivors, including incarcerated people. I'm heartbroken about hurting anyone or making them revisit their pain.

Tara Betts, one of the guest editors, reiterated that she and her fellow editors had not known the charges against the poets they included.

“I can say that I had no intent to perpetuate further harm,” she wrote on Twitter. “I’m going to be honest about my life. I barely escaped being a survivor myself. I’ve counseled many friends, family members and former students who are survivors, including incarcerated people. I’m heartbroken about hurting anyone or making them revisit their pain. I’m also devastated by policing and prisons and how these are overtly racist and classist systems that protect property over people. What happens when those hurts overlap?”

A petition signed by more than 500 people is calling for Nesset’s work to be removed from the magazine, saying that his “time served does not equate to the lifetime of emotional, physical, and psychological trauma victims of child pornography and sexual assault endure”.

Tiffany Melanson, another poet featured in the issue, expressed her “deep disappointment” in the situation, “and the lack of foresight and sensitivity that led to it”.

Last year the Poetry Foundation was criticised in a letter signed by almost 2,000 people over its brief, “watery” response to Black Lives Matter. The foundation and magazine had said that they “stand in solidarity with the black community, and denounce injustice and systemic racism”. But the signatories, who included the award-winning poet Ocean Vuong, said the foundation had been asked for years to redistribute its “enormous resources” to marginalised artists, and had not done enough.

The writers said they would not submit any work to the magazine until their demands were met, which included the resignation of the Poetry Foundation president and board of trustees chair, as well as for the “significantly greater allocation of financial resources toward work which is explicitly anti-racist in nature”.

Both the president and chair subsequently resigned, with former president Henry Bienen telling the board that he had “lost respect for the staff who did not defend themselves or the foundation from attacks they knew to be false”. – Guardian