Disruption – c’est la vie, this book says to me. And, personal or political, familial or within your own being, how you it survive it, and create yourself out it, is the very stuff of life 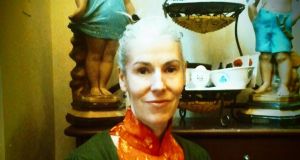 Mia Gallagher: her novel’s “sense of the magical reflects the rather magical process by which all of us nudge sense out of the chaos of our existence”. Photograph: Sean Molloy

If I was asked to describe Beautiful Picture of The Lost Homeland in two words I’d say “you can’t”. It’s huge, ambitious, complex, fascinating in its incorporation of disparate ideas, riddled through with the information of considerable research. One might describe it as a novel of several intermeshing books.

To begin, it’s St Patrick’s Day, and a terrorist explosion occurs on the London Underground. We’re propelled into Book One – into what Mia calls a Kunstkammer / Wunderkammer, a Museum of Curiosities, through which we are given a quirky, succinct review of German history, focussed on Sudentenland, the once majority ethnic-German region of the former Czechoslovakia. There’s a description of personal lost objects; an inventory of ever-changing bloodstained maps; a recounting of personal post-WWII experience, articulated as lists of short, shocking statements; we’re treated to a musical entertainment featuring Hitler; there are pointed questionnaires about what we are experiencing, which provoke further insight into the personal and political history we have garnered.

Book Two is set now, in Dublin, on that St Patrick’s Day. The main protagonist, Geo, a freelance television editor, records a personal monologue. It’s addressed to his/her aging father, David, a retired structural engineer. Geo is in the process of physically transitioning from male to female, from Georgie to Georgia, hence the abbreviation Geo. Past and present are woven together in Geo’s monologue, as he explains herself.

Book Three is the story of Geo’s background, of his/her family and childhood milieu, of the multiple histories intermeshing as he evolves into herself. Most significantly there’s his father David, and minder, Lotte. Book Four, again contemporary, the personal testimony of octogenarian Anna Bauer, the estranged mother of Lotte, refugee from postwar Sudentenland, emigree from postwar West Germany, now long resident in the UK. She’s being recorded for a documentary.

They all combine into a tour de force about (for me!) the navigation of personal identity: a cross-generational, Irish/German, via Britain, post-World War II historical, multi-location, multi-character, multi-stranded, massive, subtle exploration of individual identity vs national, private vs socio-ideological, gender vs sexuality.

Throughout there is the theme of rupture, from the opening terrorist explosion, to the terrorism of the Third Reich, to the violence of its aftermath of retribution, to a child’s death by car bomb in ’80s Northern Ireland, to violent self-destruction as self-expression in ’70s Berlin. And within and all around the quieter violence of the ruptures of premature parental death, betrayal, hushed-up rape, infidelity and the cross-generational repetitions of bad history, personal and political, in the thwarting of human happiness.

What I loved about Mia’s critically acclaimed first novel, HellFire, was the element of eerie magic realism in its evocation of a druggy, gritty, ugly ’80s Dublin. That magic is here too, as for instance when troubled child Geo finds the Dublin back lane that becomes an invisible dimension, where a friendship evolves with a lost girl. One senses it’s all probably a figment of Geo’s needy imagination – but that “probably” remains even after it has been literally named as such. This sense of the magical reflects, one might say, the rather magical process by which all of us nudge sense out of the chaos of our existence.

Towards the end, in the Book One section, comes a questionnaire that for me is an enunciation of the themes at play in the whole –

“Sensing the inevitable and fast-approaching opening of this Kammer’s Schröderingerish Box, we ask you to consider the following statements via the lens of True and/or False:

(a) it’s good to know where you come from

(d) knowing why you do stuff means you can do it again, only more effectively

(k) everything that appears horrifying may, in its deepest essence, be something helpless that needs our care (courtesy RM Rilke)

(l) everything that appears horrifying is, in its deepest essence, something that should be contained and, if it continues to horrify, destroyed

The novel concludes on the comic and resonant note that Anna Bauer, after trawling through the epic of her traumatic history for a documentary recording, feels impelled to end the interview, and as it happens, the whole huge whammy of everything articulated in this whopping novel, to catch the evening news on TV.

Ultimately this novel left me reminded that we here, right now, are lucky to have peace in our time – taken for granted perhaps, what with our geography as a republic on an island in outer Europe, and our almost monocultural make-up. Yet given the fractious global village within which we operate, the currently fracturing EU, and the unstable common currency of which our economy is part, and the long history of disruption within that community and the politically unstable picture all over, it’s not something to be taken for granted. Disruption – c’est la vie, this book says to me. And, personal or political, familial or within your own being, how you it survive it, and create yourself out it, is the very stuff of life itself.

Anne Gildea is a comedian and writer, co-founder of The Nualas and author of the novel Deadlines and Dickheads and memoir I’ve Got Cancer What’s Your Excuse? Beautiful Pictures of the Lost Homeland by Mia Gallagher, published by New Island Books, is February’s Irish Times Book Club choice. Mia will discuss her work with Laura Slattery of The Irish Times at the Irish Writers Centre, Parnell Square, Dublin 1 on Thursday, February 23rd at 7.30pm