Annemarie Neary on Siren: there can never be ‘no-go areas’ in Troubles fiction

When ‘things have moved on’ is it irresponsible to use the thriller form to address complex issues, and the painful experiences of people who are still suffering? 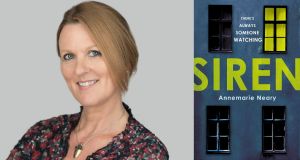 Annemarie Neary: If self-invention and the denial of reality have a devastating impact on an individual, what do they do for the body politic?

In all post-conflict societies, there are issues that become too inconvenient, too disruptive of the common good to be considered worth pursuing. For a writer of fiction, those are the very areas that are the most alluring. Perhaps a thriller writer’s only obligation is to thrill, to keep the reader turning those pages, to “ramp it up” (and there’s no doubt that publishers’ taglines in this genre do little to project an air of serious intent). However, if you venture into those dark corners, creating simulacra of actual events, then perhaps you take on a responsibility to have care for those who still inhabit the reality.

Róisín Burns, the protagonist in my novel, Siren, is both a victim of the Troubles and the perpetrator of terrible acts. After growing up in ’70s Belfast, she forges a new life in New York, where she goes native, works hard and gets on. But Róisín is addicted to deceit, her true history obfuscated. When her carefully constructed persona begins to crumble, Róisín travels the dangerous path towards truth.

But which truth, and whose truth? Truth then, or truth now? Truth above all else? When Róisín takes on Lonergan, a politician on the rise, she is re-entering a world she left behind decades before. But things have changed and republican hard man Lonergan is part of the new dispensation, while Róisín is still tied to the past.

Lonergan is on the cusp of respectable power; he won’t relinquish his hard-won legitimacy without a fight. Moreover, notwithstanding his violent past, Lonergan’s role in politics is apparently benign. Has Róisín the right to jeopardise that? Why? For what purpose? This rehearses an age-old dilemma: should a former perpetrator who has opted for political engagement ever be forced to account for his past? Or, for the sake of the common good, should he be let off the hook, regardless of the injustice to individuals?

But Róisín is not just in the game of exposing Lonergan. Despite an ostensible self-sacrificing motive, she is driven by the intense desire, common to all victims, to have her own truth acknowledged. She needs to hear Lonergan say “yes, that’s how it was, I was to blame”.

The seed for Siren was a barely remembered incident I’d heard about on the news as a child growing up in ’70s Northern Ireland– a honey trap involving young women and dead soldiers. I wrote a short story that covers a similar set of circumstances, and for a while that was that. But the story of Róisín, the young girl unknowingly drawn into complicity, wouldn’t leave me. What implications would such a history have for Róisín, years down the line? Where are the traces of violent traumas when the events themselves have passed?

Returning from the States to confront Lonergan at his holiday home on Lamb Island, Róisín is also entering the realm of suspense, the territory of the gothic with its lone wolf stalker, its cottage on the cliffs, high seas and isolation. Lamb Island borrows some of its geography from Cape Clear, the most southerly island off the coast of west Cork. In other respects it is an entirely imagined place, full of ambivalent beauty and prone to sudden change, its cliff-top house lit by the inexorable sweep of a lighthouse beam. These crime fiction archetypes signal the depth of the danger in which Róisín finds herself, psychologically as well as physically. She has ventured into a fear space, much as the Troubles has become fearful territory for the Irish writer.

For Boyle, the man whose job it is to get rid of Róisín, Lamb Island is home. Peeping Tom, fantasist, outsider, Boyle gives an alternative view on Róisín and Lonergan, from the vantage point of a world that has moved on, where Northerners are “grey miserable fuckers at the best of times” and the conflicts of the past of little interest. Which brings me to the “sure it all happened long ago, what about it?” school of thought. In Siren, this position is articulated by Róisín’s sister, Maura, who still lives in Belfast and takes the view that “all truth does is rake things up”. This aspect of the book has a particular resonance for me. When “things have moved on” is it irresponsible to use the thriller form to address complex issues, and the painful experiences of people who are still suffering?

There can never be “no-go” areas in fiction, but there are nuances that should be observed. The brutal world of Lonergan doesn’t spring from a void – Róisín reflects on “the list of places where Da never had a job and never would have got one, even before he was interned”. She won’t walk home through Tigers Bay for fear of attack, and there are allusions to “the other side, romper room, a turn for everyone” and the risk of being carved up outside a loyalist drinking club. Nonetheless, the entirely amoral nature of the acts in which Lonergan involves Róisín demonstrates just how quickly those who resort to violence lose all human perspective and start to drown in it.

What then of the nexus between fiction and reality? Elements of Siren were inspired by a number of “real life” events – it would be disingenuous to claim otherwise – but, conscious of the sensitivities of dealing with other people’s experiences, I haven’t attempted to replicate those. The novel represents an entirely invented set of circumstances where reality is recast and played out by characters that are not proxies for real-life figures, but their own fictional selves.

The world of Siren is located at the intersection of the personal and the political, where Róisín is still trapped, caught in the eternal post-conflict conundrum that sees personal narrative pitted against Realpolitik. The novel provides answers within its fictional sphere, but in the real world these key questions remain problematic, whether or not “things have moved on”. When does the pursuit of individual justice become irrelevant? When the players themselves have passed on, or when an acknowledged truth has been agreed? And there is a larger question still. If self-invention and the denial of reality have a devastating impact on an individual, what do they do for the body politic?