A poet’s long last journey with her dying mother 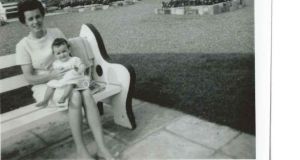 In early 2012, Mam was diagnosed with leukemia. Graciously accepting the prognosis and the weekly visits to St James’s Hospital for blood transfusions and treatment, she lived for nearly two years before passing away, without fuss or fanfare, on December 7th, 2013. As her daughter, those two years were both the easiest and hardest of my life. Those two years allowed us to simply appreciate each other’s company and let go of the complicated layers that build up around any close relationship. Those two years, they almost broke my heart and nothing could have prepared me for the constant ache that first year of her absence.

Prior to Mam’s diagnosis, I’d already begun to write some poems that were exclusively about her. Testament, the longest and most difficult poem I ever wrote, took eight months to complete and allowed me to articulate the loving but complex relationship we had when I was a child and she was suffering from what we later came to know as bi-polar disorder. I remember showing her the poem, waiting nervously as she read it silently and the relief when she pronounced herself happy with it, but, she cautioned: “I don’t want to listen to it being read aloud!” Once written, Testament opened the floodgates to other poems; simpler, but no less true, that celebrated our relationship as two grown women, more alike than I’d care to admit.

After the diagnosis was delivered, with a prognosis of six to 12 months, it no longer felt like a choice, but an imperative that I write about Mam and record honestly and without sentiment the journey I was taking, both as an adult child witnessing the death of a parent, and as the keeper of my mother’s story. The challenge was to stay present to what was happening, day by day and week by week, and still turn up at the page as regularly as I could and let the words flow. Some poems demanded I write them almost immediately after a particular experience; others waited months, or in some cases, years, before announcing themselves ready to be tackled. Land’s Ending, a poem that attempts to capture the precise moment when Mam knew it was time to stop the treatment, only allowed itself to be written after I submitted the manuscript to Jessie, my publisher, almost three years after the event.

And of course other aspects of my life went on as normal: the demands of work, children growing up, Dad being diagnosed with early stage dementia, and all the classic themes of middle-age life rudely poking their heads into the poems. Life went on and I wanted the collection to reflect that reality. No matter how intense or singular an experience felt, all around it was the mundane, frustrating, gorgeous hum of daily living. That’s why I chose not to go for different sections in the collection but rather let a loose narrative arc lend it shape, digressing regularly from the main theme to an individual poem or cluster of poems that appear to pop out of nowhere, because that’s how life is experienced. And those digressions even happened within individual poems. One of the later poems in the collection, Reframe, starts off with a panicked return visit to the hospital and ends up with Sammy the dog eating Mam’s bottom teeth. I read that poem as part of her eulogy and afterwards people came up to me saying that it was such a relief to be able to laugh during the ceremony. Mam would have loved that – people chortling in their seats at her funeral.

As with the shaping of any collection, there were always two opposing but complementary forces at play: my will, and the will of each individual poem; the objective truth of what happened, and the emotional truth of what was felt; my needs as a writer and the needs of my reader. The challenge lay in melding these forces to create a collection that gives voice to the universality of an intensely personal experience.

It’s often only in the process of pulling a collection together that one can see certain patterns or motifs emerge across a body of poems, which in turn, may point to a preoccupation in the poet’s mind. Over the period of time it took to write the collection, it appears I was obsessed with numbers that related to time passing, perhaps as a way of placing flags or markers that could be returned to, to trace the ebb and flow of each shifting tide. In the face of uncertainty, there is a comfort and safety in numbers. Unsurprisingly, there’s a poem in the collection By Numbers that explores the underlying similarities in the experiences of waiting for someone to be born, and waiting for someone to die.

The poems in Tides Shifting Across My Sitting Room Floor span 47 years of a relationship between a mother and her only daughter, and over 90 years of a family’s life. There’s Dad, a blond and beautiful three-year old, there’s Mam, jumping off the pier in Cuskinny. There she is pregnant, there I am giving birth. There’s Mam receiving her first transfusion, there she is receiving her last. There’s life stopping, there’s life going on.

I’ve done the sums and totted up the columns. Mam is the star of 17 of the 49 poems in the collection and gets an honorable mention in five more. Those figures would have pleased her no end. And yes, that’s more poems than Dad got.
Tides Shifting Across My Sitting Room Floor is launched at 6.30pm on Wednesday, May 10th at Books Upstairs, D’Olier Street, Dublin 2. For more information or to purchase a copy of the collection, go to salmonpoetry.com