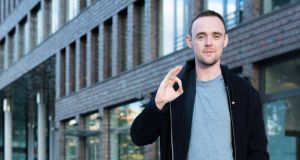 Martin McKenna: “I think we sell ourselves short in Ireland. People like Conor McGregor, Saoirse Ronan, Hozier, Rory McIlroy and Niall Horan are huge for our country’s youth”

With a father on the Meath Community Games board, sport was always important for Martin McKenna. However, he credits his love of different cultures to his exposure to asylum seekers as he grew up in Julianstown.

“When Mosney was turned into a direct provision centre, children from various parts the world came to Meath and were then integrated into our small community through the community games,” he says.

The youngest of seven children – two of whom are now based in Korea and London – McKenna always knew that the wanderlust would kick in.

With a double honours degree in history and geography from NUI Maynooth, he studied for a further year in DCU to complete an MA in film and television. He did internships in TV3 and other media outlets but when bills had to be paid, he had to take a job at VHI which wasn’t conducive to his career or area of interest.

“I was a GAA player for a senior club in Meath so that was my first priority. I always tried to find jobs that didn’t necessarily suit my studies, but my football schedule,” he says.

Career opportunities were not forthcoming in Dublin, so he headed to Dortmund to find a fresh perspective, after taking a Skype interview with Holidayguru.

“The company made me feel very welcome by placing me in an apartment for the first few months of my stay along with other international colleagues from across Europe. This helped me settle socially,” he says.

McKenna started out as content editor for the website but when, after six months, his boss took maternity leave, he took over as marketing manager of the project.

“I was thrown in at the deep end and exposed to every area of the business, so I learned a lot very quickly,” he says.

McKenna and his team have built Holidayguru.ie into one of the biggest travel websites in Ireland. Part of a larger brand, based in Dortmund, it provides bespoke websites in 11 other European countries and currently employs 120 people in subsidiary websites.

“Our website has only been operating since February 2014 and has grown rapidly since then. It’s a bargain travel blog that searches the internet for the best value travel deals at home and abroad, like any regular online customer,” he says.

“We then repackage it in our own Holidayguru style and give people all the info that they need about the location.”

With 228,000 Facebook followers and an average of about 400,000 website visits per month, McKenna is breaking records monthly so it is an exciting place to work.

He finds that the locals are passionate about football, in a similar way that Irish are about sports such as GAA, rugby and soccer.

“I’ve made a lot of friends in work from all across Europe at Holidayguru, people who are a similar age to myself and going through the same experiences. For this reason we’ve developed a special bond and are like a bit of a family,” he says.

As a young graduate in Ireland, it is difficult to find a creative position that pays and McKenna feels that projects such as JobBridge have approached the problems in a completely negative way.

He was given responsibility of country manager of Holidayguru.ie after only six months. The trust and responsibility would not have been given to him if he had stayed at home as he wouldn’t have been in a permanently employed position.

“My experience of employment in Germany is that young people here are allowed to express themselves creatively,” he says.

“I’ve been tested in a variety of ways since I’ve taken on my role. This can be stressful initially, but after a while you start having more confidence in your own ability to solve problems.”

Living abroad has given McKenna a different perspective on life. Engaging with other cultures on a daily basis, learning a new language, trying to read ingredients on food packages and making doctor’s appointments in a different language: small things like that can challenge every day.

“I think we sell ourselves short in Ireland. People like Conor McGregor, Saoirse Ronan, Hozier, Rory McIlroy and Niall Horan are huge for our country’s youth because they have such a confidence in themselves and in their ability to be successful on a global stage,” he says.

McKenna says that since moving abroad, he has become more proud of Irish culture. He is still young and wouldn’t write off returning some day but the opportunities in Holidayguru are proving too attractive to leave.