UK faces having ‘no flights to or from Europe’ after Brexit 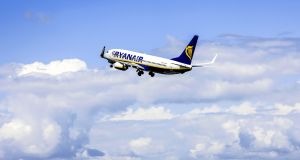 Ryanair has said there is a threat to flights between the UK and Europe if Britain does not negotiate an Open Skies alternative. Photograph: iStock

The UK could find itself without any flights to or from Europe for a period after March 2019 unless it puts aviation to the top of its Brexit negotiations, Ryanair has warned.

With Britain’s departure from the EU due to get underway formally on Wednesday afternoon, the low cost airline has identified air travel as one of the most pressing issues over the next two years.

“It’s become worrying that the UK government seems to have no plan B to maintain Britain’s liberalised air links with Europe in the absence of remaining in the ‘Open Skies’ regime,” said Ryanair’s Kenny Jacobs in a statement.

According to Ryanair, with the UK set to leave Open Skies, it will either have to negotiate a bilateral agreement with the EU to allow flights to and from Europe to continue, or else revert to historical World Trade Organisation (WTO) rules which do not cover aviation.

This, it said, would raise the “distinct possibility of no flights between Europe and the UK” for a period after March 2019 in the absence of a bilateral deal.

“The best we can hope for is a new bilateral agreement between the UK and EU, however, we worry that Britain may not be able to negotiate such a bilateral in time for the release by airlines of summer 2019 schedules in mid-2018,” Mr Jacobs said.

Ryanair said that as it plans its flights 12 months in advance, there are now just 12 months to go until it completes its summer 2019 schedule.

“The UK Government must respond to the airlines and our customers, and put aviation at the top of its agenda when it negotiates its Brexit deal with Brussels, ” Mr Jacobs said.

The airline employs over 3,000 staff in the UK and expects to carry over 44 million passengers in and out of British airports this year.

It has already focused growth in other EU airports, basing no additional aircraft at its 19 UK airports in 2017 and cutting its growth rate from 15 per cent to just 6 per cent this year, it said.

Long-hyped smart fridges will never run out of milk or data 12:02
State subsidises public sector retirees to cover gap until State pension 11:57
Trump holds America up as ‘example for the world’ 11:57
My father in a nursing home wants to gift me his house 11:23
Omagh manufacturer Naturelle to add 50 jobs in £4m expansion 10:50

1 Who are Ireland’s 17 billionaires?
2 State subsidises public sector retirees to cover gap until State pension
3 My father in a nursing home wants to gift me his house
4 Richer countries must do more to tackle climate change, Thunberg tells Davos
5 Nama lends Cosgraves €15m to fund huge apartment development
6 Health insurance: Switch often for your financial wellbeing
7 Are there annual limits on inheritances or gifts to a child?
8 Insolvency arrangement approved for man with €60 million in debts
9 Q&A: Why has the pension age question suddenly become an election issue?
10 Property firm sues engineering company over waterproofing of basement
Real news has value SUBSCRIBE