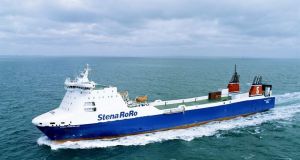 The Stena Foreteller will offer an additional 3,000 lane metres of freight capacity per trip and can accommodate both accompanied and unaccompanied traffic.

Ferry operator Stena is to fast-track the addition of a new vessel on its Rosslare and Cherbourg route in a bid to ease the backlog in freight deliveries triggered by the UK travel ban.

The new freight-only craft, the Stena Foreteller, has been moved into position early and will commence sailings from Rosslare tomorrow, the company said.

The vessel, which was originally scheduled to begin sailing on January 4th, will double the company’s freight capacity on the route and increase the number of weekly sailings from three to six.

Stena said it had witnessed a sharp increase in demand for freigh deliveries and/or direct routes to mainland Europe.

“We could fill our ferries two or three times at the moment,” a spokesman said.

Stena said its new Foreteller craft will offer an additional 3,000 lane metres of freight capacity per trip and can accommodate both accompanied and unaccompanied traffic.

The company is also considering adding a new vessel to its existing North Sea route from Rotterdam in the Netherlands to Harwich in the UK.

This comes as France banned road freight from Britain due to a new Covid-19 strain, creating chaos at ports and huge backlogs of freight deliveries.

Ferry providers had been looking at ways to build additional capacity on routes between Ireland and the continent in case Brexit causes major congestion at UK ports.

The ban on travel in and out of the UK, imposed by several European countries to contain a new coronavirus variant, has compromised the UK “landbridge” route to mainland Europe, which is used by hundreds of Irish businesses to get goods in and out of Europe.

Brittany Ferries said it had no immediate plans to change its fleet deployment.

“The UK ports from which Brittany Ferries operates are currently not congested, but we are currently subject to the same restrictions as elsewhere and are not able to ship driver accompanied freight or passengers on southbound routes from UK to France,” a spokesman said.

Danish operator DFDS, which will operate a new six-times-weekly service between Rosslare and Dunkirk from January 2nd, also indicated it is unlikely to get the vessels in place before the new year.

A spokesman said the new service was designed to coincide with Brexit, which will involve customs checks for road freight passing through the UK and on to Europe.

Irish Farmers’ Association (IFA) president Tim Cullinan said he was very concerned about the impact of border closures on the movement of our agri-food exports to the continent, and on the efficiency of the food supply chain.

“We have normal trade across to the UK. The difficulties relate to the movement of freight which is trying to get across the UK landbridge to the continent,” he said.

“This level of disruption could be very damaging for the movement of stock off farms and the efficient functioning of the supply chain,” he said.