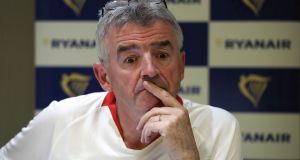 The company, which is still dealing with industrial unrest after settling a dispute with a group of Irish-based pilots, will hold its yearly meeting of shareholders on September 20th.

Investor adviser Pension & Investment Research Consultancy (Pirc) recommends that shareholders vote against re-electing Mr O’Leary, citing the industrial unrest and flight cancellations at at the airline over the last year.

Other firms such as Glass Lewis, recently advised shareholders to oppose the re-elections of chairman David Bonderman and non-executive director, Kyran McLaughlin.

Pirc’s note, published on Tuesday, is the first to call on shareholders to oppose the reappointment to the board of the businessman most closely identified with the airline’s success..

The firm, which focuses on issues such as the composition of company’s boards and their accountability to shareholders, also opposes the re-election of Mr Bonderman and Mr McLaughlin, along with several other figures.

Pirc points out that data released by Ryanair for British workers, covering the period up to April 2017, showed a 72 per cent gender pay gap, with women making up just 3 per cent of the top earners.

“In addition, Ryanair were forced to suspend 18,000 flights between November 2017 and March 2018 due to poor planning on pilot holiday rosters,” Pirc says. That is before the more recent strikes at the airline by unions in recent months, the advisory group notes.

“The increasing amount of issues faced and insufficient response by the company and its hierarchy puts its reputation at stake and thus potentially damaging shareholder value,” Pirc argues. “As the chief executive officer is the most accountable figure in the company’s affairs, an oppose vote is recommended.”

Ryanair responded that “shareholders will pass all agm resolutions by a large majority this year, including the nomination of directors and chairman, as they have done in all previous years.

“They appreciate how fortunate we are to have an outstanding chairman like David Bonderman [to] guide the board and the airline.”

Ryanair intends barring media from its agm “to allow shareholders discuss matters freely with the board without those discussions being distorted for PR purposes”.

“Ryanair needs a chair who works in the interests of all the company’s stakeholders – workers, passengers and investors – and doesn’t just prop up a cosy management club,” he said.

Meanwhile, Ryanair chief marketing officer Kenny Jacobs warned that pilot strikes at its German bases could lead to job losses. The carrier has cancelled 150 of 400 flights in and out of Germany on Wednesday, but offered customers refunds, a free move to the next flight or reroute option.