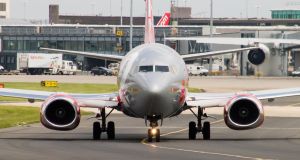 Shannon Airport fears that it will have to lay off workers if it does not qualify for the Government’s Covid-19 job support scheme.

The State-owned company responsible for the airport, Shannon Group, has registered for the Government wage subsidy scheme, aimed at aiding businesses in keeping workers employed during the coronavirus crisis.

The company has told unions that this would assist in avoiding the need to lay off any workers and possibly in rehiring some staff let go from part of its operations over the past number of weeks.

A Shannon Group spokeswoman confirmed that the company had registered for the Government scheme, which pays 75 per cent of a worker’s pay up to €410 a week.

“The dramatic fall-off in airline activity due to the global restrictions on air travel has seen Shannon and airports around the world operating on a much reduced basis,” she said.

The heritage business manages several well-known tourist attractions, including Bunratty, King John’s and Malahide castles, the Casino Model Railway Museum, shops at the Cliffs of Moher, and other facilities.

Sweeping travel restrictions aimed at containing the spread of Covid-19 have virtually grounded airlines’ passenger operations across Europe and North America, the main sources for traffic in and out of Shannon Airport.

Along with other State airports, Shannon confirmed in the last week of March that it would remain open for cargo and other vital services, but would be operating on a “significantly reduced basis”.

Flights carrying medical supplies such as ventilators and beds destined for hospitals in the Republic have landed there.

Fellow State company, DAA, responsible for Cork and Dublin Airports, recently told staff that it intended putting most of its 3,500 workers in the Republic on a four-day week, cutting their pay by 20 per cent.

It is applying the reduced hours from April 26th to June 20th. DAA has also applied to take part in the Government Covid-19 wage subsidy scheme.

State aviation companies, including Shannon, DAA and the Irish Aviation Authority, have been in talks with unions as they attempt to deal with the fallout from the crisis.

Johnny Fox, official with Fórsa, which represents workers in these organisations, pointed out that developments in the various companies brought “certainty and clarity” for the union’s members.

Shannon Group’s operations include the airport, heritage business, a commercial property arm, which manages about 400 commercial buildings and the Shannon Free Zone, and the International Aviation Services Centre, which promotes the region to companies working in air travel and aviation.