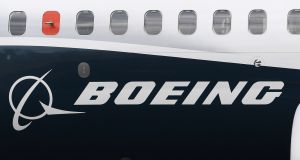 Boeing Co missed sharply-lowered Wall Street estimates for revenue and cashflow in the first quarter and suspended its 2019 outlook, as the world’s largest planemaker continued to suffer from the grounding of its 737 MAX jets.

The company said it faced $1 billion (€890 million) in increased costs in the first-quarter ended March 31st, related to the 737 aircraft as it halted deliveries of the grounded planes to customers around the globe. The company also said it was halting share buybacks. The fallout of a second deadly crash within months in March has seen

Boeing cut production of the jets to 42 aircraft per month, down from 52, and its operating cash flow in the first quarter was around $350 million lower than a year earlier.

Boeing is also spending on developing a fix for an anti-stall software known by the acronym MCAS, which has been a common link in the separate chains of events leading to the two crashes within a span of five months.

The company said it would be issuing a new forecast in the future when it has more clarity around the issues surrounding the 737 MAX. First-quarter operating cash flow declined to $2.79 billion, from $3.14 billion, missing the Wall Street’s average estimate of $2.82 billion. Revenue fell 2 per cent to $22.92 billion, below analysts’ average estimate of $22.98 billion. Excluding certain items,

1 House asking prices rebound but will likely fall again - MyHome
2 Plans for €2bn Dart expansion lure Bombardier to Dublin
3 Irish food trade could slide by one-third if EU and UK fail to cut deal
4 TV guide: Pros and cons of broadcast television options
5 There may be trouble ahead for the housing market
6 Ireland has among highest rates of home-working during Covid
7 Google tells workers to return to country where they are employed
8 Tokyo Stock Exchange suspends trade after worst-ever glitch
9 Commercial landlords urged to make ‘concessions’ to struggling businesses
10 Karlin Lillington: Ireland spent months discussing pubs but not arts venues
Real news has value SUBSCRIBE