Why Google played the Alphabet card

From an Irish perspective, the primary interest will be in how the creation of Alphabet affects the company’s global tax operations 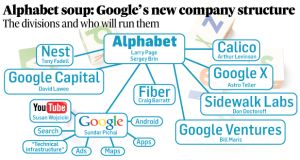 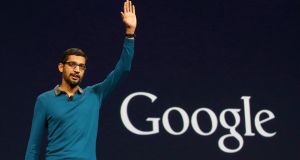 Highly rated Sundar Pichai appears to be the biggest winner, taking the reins as chief executive of what might be termed “classic flavour” Google.

The announcement late on Monday that Google was going to restructure under a new umbrella company called Alphabet was the biggest shock in the technology business in many years - the statement by co-founder and chief executive Larry Page landed with nary a whisper or rumour to precede it.

“We’ve long believed that over time companies tend to get comfortable doing the same thing, just making incremental changes,” wrote Page, explaining the thinking behind the move. “But in the technology industry, where revolutionary ideas drive the next big growth areas, you need to be a bit uncomfortable to stay relevant.”

The surprise creation of Alphabet represents the most striking example of a technology company voluntarily discomfiting itself in living memory - but it is not entirely clear what the benefits will be, leading to a flurry of speculation about how exactly this will help Google to “stay relevant”. Co-founder Sergey Brin will be president of Alphabet, while the highly rated Sundar Pichai appears to be the biggest winner, taking the reins as chief executive of what might be termed “classic flavour” Google.

To best understand the new arrangement, Google’s SEC filing offers the clearest outline: “a new operating structure to increase management scale and focus on its consolidated businesses. Under the new operating structure, its main Google business will include search, ads, maps, apps, YouTube and Android and the related technical infrastructure…Businesses such as Calico, Nest, and Fiber, as well as its investing arms, such as Google Ventures and Google Capital, and incubator projects, such as Google X, will be managed separately from the Google business.”

Those details would appear to undermine one of the first theories about the reorganisation, that it was a pre-emptive measure to allay pressure from the European Commission over anti-trust issues. Back in April, EU competition commissioner Margrethe Vestager issued a “statement of objections” against the search giant over some of its business practices, including its comparison shopping service, advertising exclusivity and she even announced an investigation into the Android smartphone operating system. “Dominant companies can’t abuse their dominant position to create advantage in related markets,” Vestager said at the time.

More than one Google employee I’ve spoken with about these anti-trust concerns felt some sort of enforced break-up might be a possible outcome of the investigations. Indeed, last November, the European Parliament made a symbolic vote calling for the break-up of Google into two - the search engine in one company and all its other businesses in another.

And yet, a look at that SEC filing makes it clear that all the elements of dominance that Vestager is concerned about will remain resolutely under the same roof, the “Google business” as the filing puts it. While regulators on both sides of the Atlantic will be scrutinising this new structure closely, it’s unlikely to change many of the fundamental concerns about Google’s activities.

From an Irish perspective, the primary interest will be in how the creation of Alphabet affects the company’s global tax operations, given the role Google’s Irish operation plays in handling international revenues. And will Alphabet’s wider stable of companies be making use of the so-called “patent box” for intellectual property that Michael Noonan announced in the last budget?

In searching for larger strategic benefits from the reorganisation, however, it’s probably unnecessary to stray too far from Page’s statement. Despite his weakness for bland corporate bromides (“Empowering great entrepreneurs and companies to flourish”), Page is an impressively direct character. When he writes “Alphabet is about businesses prospering through strong leaders and independence. In general, our model is to have a strong CEO who runs each business, with Sergey and me in service to them as needed,” he’s spelling it out clearly. The model, apparently, is inspired by Warren Buffett’s Berkshire Hathaway, which Page expressed admiration for in an interview with the Financial Times last year.

In that light, the benefits are rather clearer. Previously, if Google were to buy, say, Tesla or Twitter, the process of folding those big firms into Google would dilute both companies - Google would be losing further focus and Tesla or Twitter or whatever would be losing independence and their own cultural identity. Now, however, if Alphabet were to acquire Tesla or Twitter, the potential for negative impact would be greatly reduced - for example, Elon Musk could continue to run Tesla and cultivate its culture as part of a family of like-minded, future-focused companies.

It’s the issue of focus that is at the centre of Alphabet’s creation, I feel. Famously, early in their careers, Page and Brin sought the advice of Steve Jobs - he emphasised the importance of focusing on doing a few things really well as being key to any company’s success. Apple, of course, brought that sense of rigorous focus to its logical conclusion, offering only a handful of products. Page and Brin, meanwhile, started with search engines before embarking on a whole range of ambitious “moonshots”, from reimagining email to digitally mapping the world to creating self-driving cars. The two approaches could hardly be more antithetical.

Shortly before his death, Jobs met with Page for a final time, and the two continued to disagree over the need for laser-like focus. “I would always have this debate, with Steve Jobs,” Page said in a subsequent interview. “He’d be like, ‘You guys are doing too much stuff.’ And I’d be like, ‘Yeah, that’s true.’ And he was right, I mean, in some sense…I always thought it was kind of stupid if you have this big company, and you can only do, like, five things.”

But the creation of Alphabet does allow Page and Brin to focus. By handing the core Google business over to Pichai, who has been effectively running day-to-day operations since last autumn, the founding duo are freed from having to look after their accomplishments and innovations from the past. Instead of overseeing the world’s largest advertising company, they can now really focus, on creating the future and doing “important and meaningful things”.