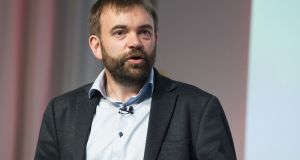 John Hurley: took over as Ryanair’s chief technology officer about 18 months ago

Ryanair hasn’t always been known for embracing the digital revolution. At a time when other companies were providing free apps and digital boarding passes, the airline was charging for its app (a hefty €3 back in 2012) and clinging on to printed boarding passes.

Its website was loud, complicated to use, and tried to sell you everything from car hire and tours to Ryanair’s own approved hand luggage. There were rumours of prices magically going up if you didn’t buy flights the first time you looked them up – something the chief technology officer for Ryanair denies, by the way.

While it may still have been pulling in the customers, there were few who would describe the company’s previous digital strategy as comprehensive.

But that is about to change. It’s all linked to the “Always getting better” programme that Ryanair announced in 2013 as part of its bid to change its image, moving away from a slightly more abrasive treatment of public and customer relations.

Aside from the immediate changes – introducing reserved seats, allowing passengers to bring a second bag on board and dropping punitive fees for reprinting boarding cards – the company has also taken on a more digitally focused strategy.

That started with a new website and app, aimed at making the booking process more simple and transparent on fees and charges. Key to the company’s transformation though is the MyRyanair platform.

The platform, created in collaboration with Comtrade, is intended to make it easier for regular Ryanair travellers to book, check in or amend bookings.

“It’s the epicentre for the Ryanair strategy going forward. We’re moving towards a more digital, more tech-savvy user,” says John Hurley, who took over as chief technology officer about 18 months ago. “You need MyRyanair to make it more personal. You don’t want to be frustrating people with a poor login experience.”

Hurley doesn’t take credit for the turnaround in the company’s attitude to technology.

“I’d love to take credit for that, but I think I’m part of the vision from the company. For low-cost airlines, the feature was always saving costs,” he says. “Michael [O’Leary] bought into the vision of always getting better, and part of that was a proper investment in IT.”

Those who sign up to MyRyanair can store everything from their passport details to their seat preferences in there. It all depends on the amount of information you give it, though. Hurley gives the impression that the airline is keen to avoid going down the invasive route that companies can get sucked into in the name of providing more personalised services.

“We’re trying to get the line between knowing enough to not annoy you, and use it in a smart way to almost read your mind,” said Mr Hurley. “Data and privacy is massive to Ryanair. The amount of data we have, if we didn’t take it seriously we’d have had problems before now.

“It’s a balance – if you trust a brand and trust a company, the more information you share, the better it is going to be.”

Hurley says the reaction to the new digitally focused Ryanair has been positive. There has been a huge uptake in digital boarding passes, he says, although he can’t divulge numbers. He describes growth on mobiles as “phenomenal”, while noting that this started from a low base last year. The shift is particularly apparent at weekends, he says.

Plans include a facility to book fast-track on your way to the airport, as long as you’re using a digital boarding pass.

“It’s all subtle and smart,” Hurley says. “The plan for mobile is not to replicate everything on the website, because you already have the responsive version of that. The app is making it simple to do things that customers want when they are travelling: fast tracks, priority boarding, booking an extra bag the morning of the flight. That’s the direction we’re going.”

Ultimately, the strategy is designed to make things easier for consumers, although obviously there are some benefits to Ryanair too. Playing nice is paying off for the airline.

“We have the best choice, we have the best price; fundamentally, you’d be a fool not to fly with us. We’ve started being nice,” Hurley says. “The bit we’ve always been missing is being nice and having the technical solution. Now we have that, we’re well on the way.

“We started behind the curve; now I think we’re as good as anyone out there. It’s onwards and upwards.”

1 Policy failed us during the banking crisis, and it’s failing us again
2 Aryzta to pursue asset sales as takeover talks fail
3 How long can Government afford to keep State pension age at 66?
4 Retailers accused of ‘stealing business’ from rivals by flouting restrictions
5 Goldman Sachs in talks to take over Blanchardstown shopping centre
Real news has value SUBSCRIBE