Expert guitar help in the palm of your hand 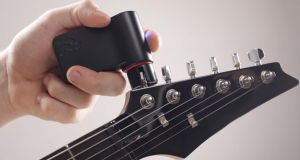 Being musically inclined doesn’t mean you couldn’t do with a hand every now and again. That’s particularly true when it comes to tuning instruments. Even the professionals need a bit of a hand sometimes – you’ve seen that figure lurking in that shadows at music events, handing the guitarist a freshly tuned guitar every now and again.

The Roadie Tuner is that shadowy figure for the ordinary guitarist – the ones without wads of cash to pay a guitar tech to keep them supplied with in-tune instruments whenever they need one.

The Roadie Tuner is a simple idea, yet an effective one. It tunes the guitar for you, using an app and a small box that will turn the guitar heads to the right setting. Created by Band Industries, the product will not only keep your guitars in tune but also look after your instruments’ overall well-being, keeping an eye on your strings and setting up a maintenance record for your guitars. So it’s something of an all-rounder.

We took the Roadie, an iPhone 6 Plus and an assortment of guitars, both acoustic and electric, and put the tuner through its paces.

The Roadie Tuner actually works, and it’s as simple as they claim. You connect up the app to the device over Bluetooth, grab your guitar and start tuning. When you initially add a new instrument, you have to calibrate each guitar string in the app. One part of the Roadie will fit over the tuning heads, and as you pluck each string, it will use the app to listen and adjust the tuning to the correct setting.

As each string is tuned accurately, the LED light on the front changes from green to blue and there’s an audible beep to let you know to move on. You can fully tune a guitar in a short time – quicker than trying to do it by ear if you are less than skilled at tuning.

Tested on a few different guitars, it produced accurate tuning each time. We tried to fool it by placing it over the wrong tuning head and a pop-up on the app asked if we were sure it was connected to the correct head.

Even with background noise, the Roadie did a good job, but if you know you are going to be in a noisier than usual environment, you can use the included cable to connect your guitar and it’s cable to the phone’s headphone jack, and get the correct tuning that way.

The Roadie even winds and unwinds the strings for you when you need to change them.

The device charges over USB too, so you don’t have to mess about with remembering to replace batteries, although you’ll have to charge it regularly.

Although it will tune a lot of stringed instruments – different types of guitars, a banjo, even a ukulele – it won’t tune bass guitars, violins or anything with wooden pegs. So if you are looking to tune any of these, you can’t use the Roadie.

The app had the occasional stutter at times, taking a few seconds to register that a string had been plucked, particularly on higher strings, but the majority of the time the app pinpointed the tuning within seconds. That can also be solved by messing around with the settings, adjusting it for noisy environments.

The device handles alternate tunings pretty well. Some are already preprogrammed into the app so you can simply select and go, and there are plenty to choose from – Open D, All Fourths and so on. You can also add your own custom tuning for quick access later.

There’s also an option to have the tuner concentrate on speed or accuracy.

Although this review was done with an iPhone, the Roadie also has an Android app. It supports any Android device that uses Bluetooth 4.0, so there’s a few Android handsets to choose from, including Samsung Galaxy phones, Sony’s Xperia range, and HTC’s handsets.

A great addition for guitarists who want either the convenience or the expertise that the Roadie Tuner brings.

1 If tourists are such pariahs should we not be testing them on arrival?
2 ‘My rent here is so low it’s a joke’
3 Belgium helps Ireland to a Brexit boon
4 Varadkar and Donohoe to meet banks to discuss mortgage breaks
5 When I’m 65: five ways you’ll benefit
Real news has value SUBSCRIBE