With challenges on all fishery fronts, new CEO at BIM Tara McCarthy has a lot on her plate 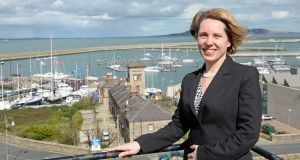 There can be few chief executives who enjoy a better view than Tara McCarthy. Her Dún Laoghaire office window frames the panorama that is Dublin Bay. Even as a west Cork woman, she has to admit this particular top-floor balcony is hard to match.

“Of course I get no work done,” she laughs with the confidence of someone who knows her job doesn’t allow much time to enjoy the view. Since she became chief executive of Bord Iascaigh Mhara (BIM) last September, she has been on the move, setting compass points north-west and south-west for the “island’s edges”, as she says.

BIM’s reach extends from Inishowen to the tip of the Beara peninsula, and right around the south and east coasts up to Clogherhead, Co Louth. It has fishery training schools in Donegal’s Greencastle and west Cork’s Castletownbere, mobile training units, and a seafood development centre in Clonakilty.

Its area officers, who are conduits for its technology service and business advice, serve the main fishing ports, while it has both aquaculture and inshore fisheries divisions.

So leaving her previous role as director of Bord Bia’s food and beverages division mighthave felt like being forced off the cushions and carpet and out onto a windswept rolling deck – wearing the mandatory lifejacket, of course.

McCarthy is quick to point out, however, that she had some previous contact with the industry. A BComm graduate with an MBS in marketing from UCD’s Smurfit Graduate Business School, McCarthy spent a decade overseas – in France, Germany and Belgium – with Bord Bia. Her office in Paris’s Maison d’Irlande and its German equivalent brought her into close contact with counterparts in other State agencies, including BIM.

“We worked together on many joint trade missions and other initiatives,” she explains. After her return to Dublin, she led a team of senior executives responsible for development of seafood, dairy, prepared foods, alcohol and associated small business.

The role with seafood was a relatively new function for Bord Bia, but one that it embraced after both it and BIM fell under the gaze of “Bord Snip Nua” – the government–appointed group led by economist Colm McCarthy which published its report on public service numbers and expenditure, in 2009. That report recommended that both State bodies be transferred to the Department of Agriculture and Food.

Each survived, but BIM lost a key marketing responsibility to Bord Bia which caused some upset within an industry which is only too aware of the challenges of selling fish on international markets . A distinctive profile had been forged for Irish seafood on European markets by officials such as Paddy Hogan.

The fishing industry, or the very much slimmed down version of it that has lived through both fleet expansion and contraction under the EU’s Common Fisheries Policy (CFP), has long regarded BIM as its one constant ally. It was a BIM chief executive, Brendan O’Kelly, who raised concerns over the signing over of fishing grounds during EU accession talks, and was promptly sent home from Brussels on the next plane.

The annual December quota talks in Brussels are a recurring reminder of how, as one industry expert contends, German banks investing in Spain after the war eyed lucrative Irish west coast fishing grounds as an untapped source of prosperity – and won.

The multimillion euro supertrawler fleet in the north-west which pioneered development of the mackerel fishery – a migratory species valued for its omega-3 fatty acids – weathered the storms, but the backbone of the fleet, the whitefish sector, has found it far more challenging.

McCarthy would have tapped into a sense of grievance during her first encounters with skippers and crew on assuming her role at BIM.

She notes the agency has also experienced considerable change since its foundation in 1952, something she was struck by when she attended two retirement functions for colleagues who had joined when the board held many additional responsibilities. It ran boat yards, administered both grants and loans, ran a highly successful young skipper scheme which created the so-called “mackerel millionaires”, and had 600 staff – including nutritionist and cookery advisor Phena O’Boyle, nicknamed the “fish market lady” for her early-morning reports of landings on RTÉ radio.

The board now employs 121 people and works with an industry which is 93 per cent male on paper – but with women playing a key shore management role.

McCarthy joins a number of women in the top jobs in the sector: the Sea Fisheries Protection Agency is headed by Susan Steele, formerly of BIM, while Yvonne Shields is chief executive of the Commissioners of Irish Lights and Valerie Cummins is director of the Irish Maritime and Energy Research Cluster in Cork.

“I have to say the warmth of the welcome I’ve received has been wonderful...it’s been overwhelmingly positive,” she says. “There’s passion, frustration, yes, but also open engagement and people are so genuine.”

Her first social gathering was the annual Irish Skipper Expo in Galway, which is now the marine sector’s equivalent of the ploughing championships. “I found it hard to leave to come home,” she laughs.

One of her first public initiatives has been the “Live to Tell the Tale” advertising campaign on mandatory use of personal flotation devices equipped with locator beacons. With seas getting rougher in a rapidly changing climate, the occupation is also as dangerous as it ever was in spite of improvements in technology. There have been 53 fishing-related fatalities at sea in the past decade, with four last year alone.

Aware that the industry has a negative association, she is keen to focus on the positives. The industry may be “hugely complex” but it “presents phenomenal opportunities”, she says.

“Much depends on the lens you put on the sector,” she adds, having recently returned from Bergen in Norway, where fish is second only to oil and achieving record exports of both wild and farmed fish. The industry carries such political weight there that protecting it is one of the reasons the Scandinavian country has remained outside of the EU.

In January, Minister for Marine Simon Coveney announced details of Ireland’s €240 million share of the new European Maritime and Fisheries Fund. BIM has been allocated €22 million this year to implement a number of schemes, ranging from targeted inshore fisheries conservation and local development to aquaculture.

“When you have complexity, you also need focus,” she says, and her focus is on training and skills, sustainability, innovation and competitiveness.

On training, she would like to develop a road map that attracts talent and offers a clear career path, in both commercial fishing and aquaculture. She sees this taking place in partnership with the training colleges, institutes of technology and agencies such as Enterprise Ireland.

The limited nature of wild stocks means that aquaculture development is imperative for a coastal country like Ireland, she says, and “all the recent UN Food and Agriculture Organisation reports” point to its growth.

BIM drew much criticism over its plans for a 15,000 tonne fish farm, aiming for the “organic” farmed salmon market, in Galway Bay. The license application has since been withdrawn due to a cap on fish-farm size in the government’s national strategic plan for aquaculture limiting offshore fish farms to 5,000-7,000 tonnes.

Its second deep-sea project, between Inishturk and Inishbofin, is still going ahead, she says. The agency is also working on a number of research and development projects in seaweed cultivation.

Sustainability will be at the heart of such developments, she stresses, and Irish seafood is in turn at the heart of the Origin Green campaign. BIM is working with Bord Bia on this scheme, she says, returning to her “partnership” theme.

The EU’s ban on discarding certain fish species at sea is the industry’s latest challenge. While there is a consensus among skippers that the wasteful practice should be eradicated, there are concerns about how the “landing obligation”, to quote EU-speak, can work when vessels are already tied to strict quotas.

“The landing obligation is influencing everyone’s thinking and it is part of the sustainability agenda,” she says. “A lot will depend on making all the moving parts work in tandem, with co-ops, processors, regional and national inshore fishery forums and so on talking to each other.”

Practical challenges like these make agriculture seem “much more predictable”, even within the confines of the Common Agricultural Policy, she acknowledges. However, she views opportunities within the renegotiated Common Fisheries Policy which the Irish industry can take advantage of. She has contributed to the Government’s Food Harvest 2020 and 2025 strategies, and is aware of the need to add value.

“Foodwise 2025 has set a target of reducing 70 per cent of output with no value added to 50 per cent,”she says. “That’s a big challenge, and no one is going to innovate just because of a Foodwise target.”

“BIM can’t split the atom, but it can provide the toolkit in relation to mining the strengths of seafood, rich in oils and protein,” she says. Again she mentions “partnership” with BIM’s seafood development centre in Clonakilty providing a platform for more research graduates, teaming up with agencies such as Teagasc and the third-level institutions.

Competitiveness, she says, is about “future-proofing the industry” and creating more opportunities in markets such as Asia, where BIM is working with Bord Bia. It may require more co-operation within the sector among small players on shared branding, she says.

Such an outcome would be far more complex for the fishing industry working in a wider “blue pond”. There will be access, monitoring and surveillance implications, she notes, and an impact on close relationships with Northern Irish ports sharing the Irish Sea prawn fishery. “It will create an uncertainty, which is never good,” she says.

Still, she comes back to her view of the industry as curator, in some senses, of an “uncut diamond”.

“When you think of the benefits of fish and shellfish . . . you wonder why people only focus on the challenges.”

She recalls a meeting during her Bord Bia days with Alex Ricard of Pernod Ricard and a discussion about how a small player such as Ireland could make a big impact in global markets.

“He looked at us in shock”she says. “He asked us to try and think of the little place that is Cognac, and how it isn’t about big scale. It’s about making an asset of scarcity. CV Name: Tara McCarthy Age: 46 Position: chief executive, Bord Iascaigh Mhara Family: married to Didier, with three children, James (9), Emily (7), Mark (5). Something you might expect: she loves all food, and shares a passion for seafood with her French husband and his family. Something that might surprise: her first job in the food industry was in an abattoir and she is more than familiar with the workings of a boning hall. She still eats beef.

Airline seats tumble 85% to 2.5 million in western Europe 16:05
BT Ireland jobs are safe as group boss gives salary to health workers 14:21
US equity futures jump alongside stocks in Europe and Asia 12:58
City of London hiring grinds to a halt over Covid-19 12:55
NTMA to sell up to €4bn of debt to help fund State’s response to virus 12:54