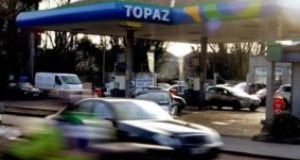 Topaz has more than 2,000 employees and close to 35 per cent of the consumer market in Ireland

The sale of fuel chain Topaz to the Canadian retailer Alimentation Couche-Tard has been completed with Niall Anderton named as the Irish company’s new managing director in place of Emmet O’Neil.

The sale of Topaz was announced early last month. It is estimated that businessman Denis O’Brien sold the network of 444 filling stations for about €450 million, more than double what he paid to gain control of it from the special liquidators of the state-owned Irish Bank Resolution Corporation (IBRC) at the end of 2013.

The sale also included a commercial fuels operation, with over 30 depots and two owned terminals.

Alimentation Couche-Tard, which operates more than 15,000 outlets worldwide has now been confirmed as Topaz’s owner after European competition regulators approved the deal.

Mr O’Neill, a nephew of Mr O’Brien and formerly chief executive of Smiles Dental, has stepped down as managing director of Topaz following completion of the transaction. His replacement, Mr Anderton, joined Topaz as chief financial officer a year ago. He has previously held senior executive positions in Primark/Penneys, O2 and Brown Thomas.

“We are very pleased to have closed the transaction in such a timely manner and are ready to shift our focus to fully integrating Topaz into the Couche-Tard family. We are particularly pleased that Niall will take over as the leader of our business in Ireland,” said Couche-Tard’s executive vice president for Central and Eastern Europe Jorn Madsen.

Topaz has more than 2,000 employees and close to 35 per cent of the consumer market in Ireland.