Over 330 jobs to be created in Letterkenny by Pramerica

Firm is the contact centre and software development division of Prudential 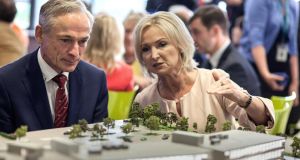 More than 330 new jobs are to be created in Co Donegal over the next three years by one of the county’s biggest employers, Pramerica Systems Ireland.

Pramerica is the contact centre and software development division of US-based Prudential Financial, providing services and support for its operations across Europe, Asia and the Americas.

The company has announced plans to build a new, state-of-the-art 1350,000 sq ft office campus in Letterkenny, close to its current offices in Windy Hall. The project is supported by IDA Ireland.

The first stage of construction will begin in the fourth quarter. The project is expected to be completed by the summer of 2017 with the building tentatively scheduled to open in mid-2016.

Pramerica ’s Letterkenny operations began in 2000, and it is seen as the jewel in the crown for the IDA in Donegal.

The company currently employs 1,200 people, 930 at its main offices and at other locations in the town, while a further 270 people work from home.

“Pramerica is delighted that we have reached this historic milestone just 15 short years since we launched our business in Letterkenny with eight employees,” said Caroline Faulkner, senior managing director and chief information officer at Pramerica Systems Ireland. “With Ireland’s rich pipeline of talent and favourable work environment, now is the ideal time for us to make an investment in a new campus facility.”

“We currently employ more than 1,200 people who are dispersed in four buildings. The new facility will bring them together in a single location. In addition, it will give us the space we need to bring on approximately 330 new staff members over the next three years,” she added.

The building will incorporate green technologies for electricity generation and rain water harvesting to reduce its overall impact on the environment.

Planning permission for the new development was granted earlier this month.

According to documentation submitted to Donegal Country council, the relocation is “part of the company’s planned phased expansion in Letterkenny reinforcing its commitment to the county and town.”

In an overview of the project, AL Architects, stated: “The overall development will provide a strong and positive company presence for Letterkenny’s largest employer. It will provide a much required boost to the town in terms of recognition for Letterkenny becoming one of the north-west’s primary employers offering opportunity for job security and encouraging population growth.”

Planning permission was granted to Extraspace Solutions, on behalf of Pramerica, subject to 16 conditions.